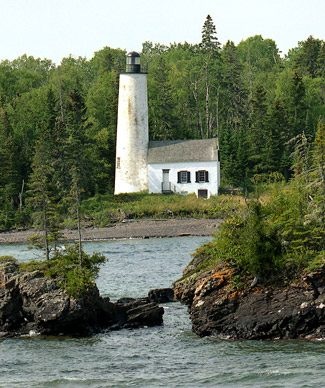 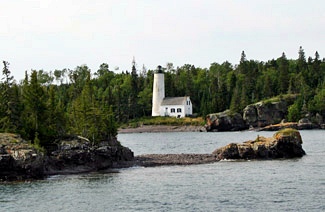 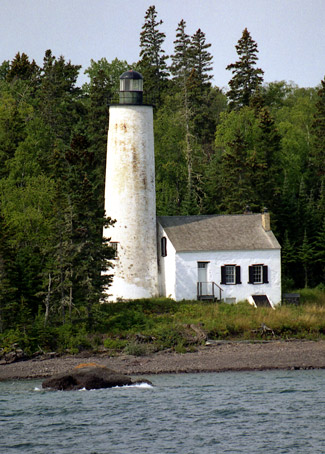 Following the signing in 1843 of the Treaty of LaPointe, which transferred ownership of a good portion of the Upper Peninsula and Isle Royale from the Ojibwe to the United States, copper mining took off in the region. By 1847, more than a dozen mining companies had claims on Isle Royale, and they and the fishermen based there clamored for a lighthouse.

In 1852, Henry B Miller, superintendent of lights on the upper lakes, recommended that $5,000 be appropriated for a lighthouse at Rock Harbor on Isle Royale. Although the Lighthouse Board was unsure if the light was really needed, it still backed the project as the law required the topographical bureau to report on the necessity of the light before it was built. Congress allocated $5,000 for Rock Harbor Lighthouse on March 3, 1853, and the topographical bureau must have sanctioned its construction as a contract for the lighthouse was awarded in 1854 to the firm of Alanson Sweet, Luzerne Ransom, and Morgan E. Shinn, who also built lighthouses at North Point, Grand River, LaPointe, Portage River, Grand Island, Point Iroquois, Eagle River, Point Betsie, Pointe aux Barques, Round Island, and Menasha.

Rock Harbor is a roughly eleven-mile-long inlet near the southeast tip of Isle Royale that is protected by a string of islands, and the lighthouse was placed to mark the westernmost entrance to the harbor. The lighthouse consists of a fifty-foot-tall, stone and brick tower connected by a short passageway to a one-and-a-half-story stone dwelling. The dwelling had an office, living room, and parlor on the first floor and two bedrooms upstairs. A fourth-order Fresnel lens was used in the lantern room to produce a fixed white light at a focal plane of sixty-five feet above Lake Superior. Work on the lighthouse began in 1855, the same year the Soo Locks opened, and the light was activated the following year by Mark Petty, who was assisted by his brother Michael.

In 1859, Congress authorized the Secretary of the Treasury, on the recommendation of the Lighthouse Board, to discontinue from time to time, such lights as may become useless by reason of the mutations of commerce and changes of channels of harbor, and other causes. Mining on remote Isle Royale had proved unprofitable, and with little shipping using Rock Harbor Lighthouse, the Lighthouse Board discontinued it in August 1859.

T.H. Stevens, inspector for the eleventh district, visited Rock Harbor Lighthouse a decade after it had been abandoned and submitted the following report on its condition:

Dwelling found to be a substantial structure in a good state of preservation. The walls apparently perfectly solid. The floor and plastering in good condition except that the plastering was disfigured with charcoal sketches but not seriously injured. The Locks were off the Doors and some of the glass in the windows broken. There is an excellent cellar under the whole dwelling. The tower is connected to the dwelling by a short covered way. The walls of which were quite badly cracked, and there were slight cracks in the walls of the tower but not of a serious character. The lantern is glazed with Plate glass which is in good condition and free from scratches.

The remoteness of the lighthouse had apparently limited vandalism.

In December 1872, John T. Whiting, an agent for the Western Transit Company, which operated steamers between Buffalo and other ports on the Great Lakes, wrote to Orlando M. Poe, engineer for the eleventh lighthouse district, requesting that Rock Harbor Lighthouse be relighted due to the planned resumption of mining operations on Isle Royale and the increase in commerce on Lake Superior that passed by the island on the way to and from Duluth. Poe agreed with Whitings request and sent a letter to the chairman of the Lighthouse Board recommending that $10,000 be appropriated to reestablish the light in the interest of the general commerce of the Lake.

On June 23, 1874, Congress allocated $5,000 for repairing and rebuilding Rock Harbor Lighthouse, and shortly thereafter a work party was dispatched to Isle Royale with all the necessary material for repairing the lighthouse along with a fourth-order L. Sautter Fresnel lens. A Notice to Mariners was published announcing that on or about the night of August 5, 1874 a fixed red light would be exhibited from the old tower situated on the west side of the entrance to Rock Island Harbor, but with work being finished sooner than anticipated, the light was activated on July 25.

Anthony Kruger was hired to keep the light by himself, but when Inspector W.P. McCann visited the lighthouse in July 1875, he recommended that an assistant be hired as Keeper Kruger had to travel twenty-five miles by boat to obtain supplies at the Island Mining Company at Siskiwit, and if the company withdrew from Isle Royale as anticipated, supplies would have to be procured from the mainland. Ferdinand Dumant was hired as an assistant keeper in October 1875.

Keeper Kruger was removed from the office of head keeper in October 1877 and replaced by Martin R. Benson. Roughly a year later, an ailing Kruger wrote to Godfrey Weitzel, the district engineer, requesting to be reimbursed $82.85 for two docks, a barn, and a hay shed that he had built at the station. To justify the need for these structures, Kruger provided the following explanation of their use:

The barn and shed I built to keep cow, pigs, & fowl to live on through the winter. The docks I was incoraged [sic] to build by Cmdr. McCann  to save boats from going on the beach in landing supplies, etc. and for my own benefit. As I should probably remain there yet if it had not been for malice and revenge of scoundrels, as I was innocent of the chargers proffered against me.

Weitzel forwarded Krugers request to the Lighthouse Board, noting that the prices paid by Kruger for materials were fair and reasonable and that all isolated stations like Rock Harbor should be equipped with a dock and barn.

With the completion of Menagerie Island Lighthouse on the south shore of Isle Royale and the abandonment of mining operations on the island, Godfrey Weitzel recommended in July 1879 that Rock Harbor Lighthouse be discontinued. The Lighthouse Board complied with the recommendation, and the lighthouse was discontinued at the close of the 1879 shipping season.

During an inspection of Rock Harbor Lighthouse in 1879, it was noted that Keeper Benson had done more to improve the appearance of the grounds [of his station] than any other Keeper in the District. Bensons diligence was rewarded with a transfer to Portage Lake Ship Canal Lighthouse.

In 1902, the Lighthouse Board reported that recent development of mines on the island had once again resulted in an increase in commerce and requested funds for a light to mark Rock Harbor. The Board repeated its requests annually until 1907, but Rock Harbor Lighthouse was never brought back to life for a third time.

Rock Harbor Lighthouse was used as shelter for camping parties, and then between 1927 and 1939, Arnold and Milford Johnson used it as a base for their commercial fishing operation. The lighthouse became part of Isle Royale National Park, when it was established in 1940, but little attention was paid the lighthouse until an emergency stabilization was carried out in the late 1950s to save the tower.

The interior of Rock Harbor Lighthouse, the oldest standing lighthouse on Lake Superior, is now home to a museum, which includes a fourth-order Fresnel lens. Access to the site is by boat from Rock Harbor Lodge.

Located on the southwestern side of Rock Harbor in Isle Royale National Park. The lighthouse is six miles from the Rock Harbor campground by boat, and is one-quarter mile from Edisen Fishery.
Latitude: 48.08982, Longitude: -88.57928

For a larger map of Rock Harbor Lighthouse, click the lighthouse in the above map.

The lighthouse is owned by the National Park Service. Grounds open, tower open in season.