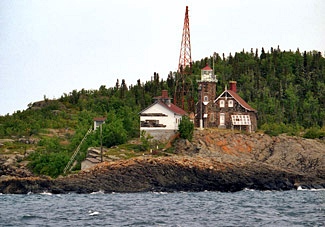 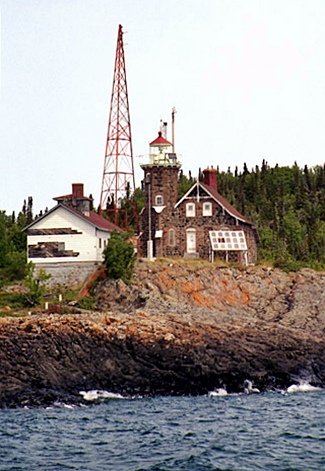 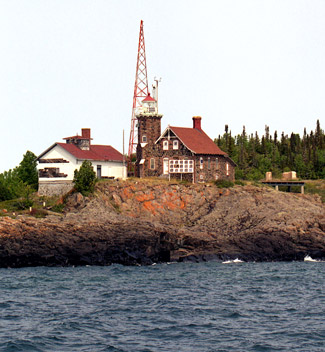 In July 1868, Thomas Macfarlane, an explorer for the Montreal Mining Company, discovered a silver deposit on a small reef off the Sibley Peninsula, not too far from present-day Thunder Bay, Ontario. The claim was purchased two years later by the Silver Islet Mining Company, and over the next fourteen years more than $3,250,000 worth of silver ore was extracted from the offshore site. The most direct route from the lower lakes to the silver mine and the towns of Port Arthur and Fort William, which were amalgamated to form Thunder Bay in 1970, passed through a three-and-a-half-mile-wide channel between the northeast tip of Isle Royale and Passage Island. In 1871, the Lighthouse Board sent the following information to Congress to support its request for an $18,000 appropriation to build a lighthouse on Passage Island.

The discovery of the silver mines on Lake Superior, and consequent sudden and remarkable increase of travel and traffic to that region, renders it desirable that a Light-house should be built on Passage Island, to mark the channel between it and Isle Royale. The island is difficult of access, and therefore any structure put there will cost more than if erected at some more accessible point.

As Passage Island Lighthouse would mainly serve vessels bound to Canadian ports, Congress made the appropriation for its construction conditional on the Canadian government building a lighthouse on Colchester Reef in Lake Erie, just east of the mouth of Detroit River. The funds to build Passage Island Lighthouse were finally released in 1880, even though work on Colchester Reef Lighthouse had not started, and in the spring of 1881, the necessary construction materials were landed on the island. After shanties for the workmen were erected, the grounds were cleared, and a boathouse and crib landing were constructed.

Built in what has been a called a Norman Gothic style, Passage Island Lighthouse is similar to ones built on the Great Lakes at Chambers Island and Eagle Bluff (1868), McGulpin Point (1869), Eagle Harbor (1870), St. Clair Flats Canal (1871), White River (1875), and Sand Island (1881). While brick had been used at the earlier lighthouses of this design, the ones at Passage Island and Sand Island were built of stone. The one-and-a-half-story keepers dwelling at Passage Island had five rooms on the ground floor and two upstairs, with a tower connected to its northwest corner. The tower is eleven feet square at its base, but midway up, its corners are beveled to create an octagonal form. While the tower is just thirty-nine-and-half feet tall, the fourth-order Fresnel in its lantern room beamed forth a fixed red light at a focal plane of ninety-seven-and-a-half feet above Lake Superior. The stations light was first exhibited on July 1, 1882.

Richard Singleton served as keeper of Passage Island Lighthouse during the fall of 1882 and decided to winter at the lighthouse after the close of the shipping season. On May 14, 1883, Keeper Singleton arrived in Port Arthur from the lighthouse to purchase supplies, and three days later, he was struck by a train. Singleton had been seen at a warehouse near the wharf just five minutes before the train passed by, and at least one person claimed he had been drinking, but not to the point of inebriation. Though his arm was broken and both of his legs were severed between the hip and the knee, the seventy-plus-year-old keeper survived for about twenty minutes before expiring. Knowing of the death of the keeper, Captain Moore of the steamer Quebec passed close by Passage Island on his next voyage and, seeing distress signals, lowered his boat and rowed ashore. Moore found Mrs. Singleton and her four children in a starving condition and kindly gave them enough supplies to last ten days. W.F. Demant officially took charge of the lighthouse on June 19, 1883 and spent the next decade looking after the light.

To assist mariners during thick weather, Passage Island was originally equipped with a 1,500-pound fog bell with a mechanical striking apparatus, but this signal must have proved inadequate, as a ten-inch steam fog signal was placed on the island in 1884. The lighthouse tender Warrington delivered the necessary materials, boilers, and machinery in August, and a small work force built a twenty-two by forty-foot frame building fifteen feet west of the lighthouse and installed the equipment in time for the whistle to be placed in operation on October 25, 1884. The roof and exterior of the fog signal were covered by corrugated sheet iron, while the inside was lined with smooth sheet iron. The intervening space was filled with lime and sawdust. The stations steam whistle was in operation an average of 492 hours each year, but in 1907, the keepers operated it for a record 902 hours while feeding it fifty tons of coal.

An assistant keeper was assigned to Passage Island in 1884 to help run the fog signal, and the station received a second assistant the following year. All three keepers and the family of the head keeper resided in the seven-room lighthouse.

A powerful storm stirred up the waters of Lake Superior in November 1905, when Walter Peters was serving as first assistant to Keeper Alexander Shaw. The house is 60 feet above the level of the lake, Peters told a newspaper in Duluth, and the waves went so high that all the windows in the kitchen were broken and the floor was flooded. Our new pumping house was swept entirely away. When the storm had subsided we found some stones weighing as much as 100 pounds strewn about in the vicinity of the house, washed there by the force of the waves.

Loaded with flour, general merchandise, and roughly twenty passengers, the 259-foot-long steamer Monarch left Port Arthur on December 6, 1906 on a daring late-season voyage and later that evening struck rocks off Isle Royale in a blinding snowstorm. All the passengers and crew managed to reach a small, uninhabited island, where they built a signal fire that caught the attention of the keepers at Passage Island. Assistant Keeper Klaas Hamringa rowed over to investigate on December 9, after the lake had calmed somewhat, and Purser Reginald Beaumont swam out to meet him. The pair rowed out in the channel and managed to flag down the steamer Edmonton, which headed back to Port Arthur to organize a rescue party. Thanks to the efforts of Keeper Hamringa, the frostbitten survivors were picked up the following day by two tugs dispatched from Port Arthur.

In order to increase the range of the light on Passage Island, the original fixed fourth-order lens was replaced on September 24, 1897 by a fourth-order, Barbier and Bernard Fresnel lens with six flash panels that produced a white flash every ten seconds. On August 24, 1913, the intensity of the light was increased from 5,600 to 50,000 candlepower by changing the illuminant from oil to incandescent oil vapor. In 1903, a forty-foot-high brick chimney replaced the pair of metal smokestacks atop the fog signal building. Concrete blocks from the lighthouse depot in Detroit were delivered to Passage Island in 1905 so an oil house, capable of storing 500 gallons, could be built.

The fog signal at Passage Island was converted to an air diaphone on November 10, 1917, and a radiobeacon was established at the station on June 25, 1927. The electricity required for the radiobeacon allowed the light to be electrified a short time later.

Not long after Passage Island had been equipped with a radiotelephone, the new device was put to good use. On December 7, 1925, the lighthouse superintendent in Detroit learned that Mrs. Harry Thompson, the wife of the head keeper at Passage Island, was dying at Marquette and desired her husbands presence. Two Detroit radio stations and the Naval radio station at Whitefish Point were asked to broadcast this information along with permission for Keeper Thompson to leave his station. A vessel in Lake Superior picked up the transmission and relayed it to Passage Island, and later that same day, a vessel picked Thompson up and transported him to Sault Ste. Marie, from where he traveled to Marquette. The radiotelephone again came in handy in 1932, when the keeper at Passage Island was able to repair the stations signal controller with the assistance of the districts radio electrician, who was working at Poe Reef Lighthouse.

The keepers at Passage Island, the most northerly U.S. lighthouse on the Great Lakes, were commended by George Putnam, Commissioner of Lighthouse, for heroic efforts in operating their fog signal for four days and three nights during a violent gale with the temperature several degrees below zero and for overcoming difficulties of frozen machinery, during which time they had little food or rest. Keeper James Gagnon described the incident, which occurred in 1932:

On Wednesday, December 7, while sounding the fog signal during a snow storm our water supply line, from the pump house to the signal house, froze, the time 5:30 a.m. We immediately disconnected the pipe and carried it to the signal house, where we applied gasoline torches to it. We had circulating water then until 6:30 p.m., when the pipe froze the second time. We disconnected the pipe line; then I attempted to get in touch with one of the other lighthouses by radiotelephone, but could not. Knowing that there might be steamers in the vicinity, I sent out a general radio call requesting that someone notify the harbor master at Fort William or at the Soo Locks that we were having trouble and that we might be compelled to sound the signal only at intervals. But due to hard work we sounded at all times except at 11 a.m. to 11:10, when we changed from one air compressor to the other. We had a break in the storm between 2:30 and 4:30 p.m. on Thursday. By this time our cooling water was getting quite warm, but we carried enough ice and water during this lull to cool the water considerably. The weather was getting worse all the time, the thermometer was registering 8 degrees below zero and the wind a half gale from the north.

It wasnt until Saturday that the temperature rose, and the keepers were able to obtain water through the pipeline without it freezing. During this four-day period, the three men had very little rest and only coffee and some sandwiches for food. Keeper Gagnons face and ears were frozen in the ordeal, as he was forced to carry water in buckets across the fully exposed stretch between the pump house and the fog signal building.

Passage Island Lighthouse was automated at the close of the 1978 season. The towers fourth-order Fresnel lens, a four-panel lens likely installed when the light was electrified, was removed in 1989 and is now on display at the Portage Coast Guard Station near Houghton. In 1996, Passage Island Lighthouse was declared surplus by the Coast Guard and was subsequently transferred to the National Park Service, which now offers excursions to the lighthouse from Rock Harbor on Isle Royale.

For a larger map of Passage Island Lighthouse, click the lighthouse in the above map.

The six-paneled, fourth-order lens installed in 1897 is held by Dossin Great Lakes Museum while the most recent fourth-order lens used in the lighthouse is on display at Portage Coast Guard Station near Houghton.