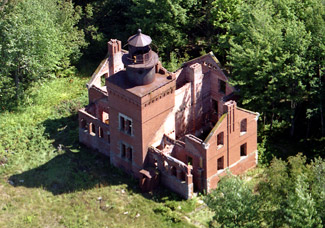 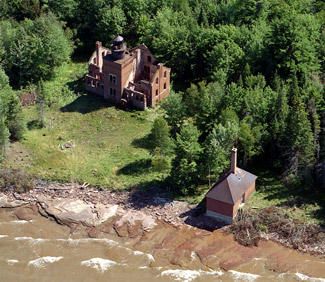 In 1892, the Lighthouse Board made the following request for a lighthouse at Fourteen Mile Point to fill a dark void on the western side of Keweenaw Peninsula:

This prominent point is about 15 miles east of Ontonagon light, nearly at the limit of its visibility. There is no light in the [northeast] direction until that at Portage Lake Ship-Canal is reached, a distance of more than 40 miles [from Ontonagon]. A new coast light is needed here in the interests of a large commerce to and from Ashland Bay. All this commerce passes directly by Fourteen Mile Point on the way to and from Keweenaw Point. It is estimated that a proper light and fog signal can be established here for not to exceed $20,000, and it is recommended that an appropriation of that amount be made therefor.

Congress responded promptly, appropriating the requested $20,000 on March 3, 1893, and later that year a fifty-acre parcel on the point was purchased and six acres were cleared of brush and trees. That fall, framing of temporary structures and outbuildings was accomplished, and the necessary construction material was purchased and stored at the Detroit lighthouse depot for shipping to Fourteen Mile Point in the spring.

The lighthouse tender Amaranth departed Detroit on May 10, 1894 with the district engineer, a superintendent of construction, the working party, and all the needed supplies to commence the work. Active operations started at Fourteen Mile Point on May 14, and during the next two weeks quarters were built for the work crew, an eight-foot-wide and ninety-two-foot-long landing crib was finished, and excavations were made for the lighthouse and fog-signal building. During June, the brick fog signal building and oil house were completed, the frame boathouse was built, a tramway connecting the landing dock to the lighthouse was laid, a windmill was erected, and work on the lighthouse was started.

Fourteen Mile Point Lighthouse resembles the more accessible lighthouses built in 1896 at Big Bay Point and Forty Mile Point, having a massive square central tower flanked by mirror-image apartments for the keeper and assistant, but Fourteen Mile Point Lighthouse has a few additional touches, like an arched portico, that made it even more attractive. Wok on the redbrick lighthouse had advanced to the point that its fourth-order light could be exhibited on October 15, 1894, but some finish work was left until the following year.

A fourth-order fixed white light, varied every twenty seconds by a red flash, was the signature of Fourteen Mile Point, and its ten-inch steam fog whistle blasted for five seconds every thirty seconds, during thick or foggy weather. The fog signal was in operation an average of 155 hours each year and varied from a low of 67 hours in 1898 to 251 hours in 1907.

Some changes made to the lighthouse over the years included changing the color of the lantern room from black to white in 1912 and increasing the lights intensity in 1915, by changing its illuminant from oil to incandescent oil vapor. One thing that did not change was the fog signal. In 1933, Fourteen Mile Point had the last remaining steam fog signal in the district.

Thomas Doody served as the stations first head keeper from 1894 until 1902, when he was transferred to Minnesota Point Lighthouse and replaced by Ralph Heater. Keeper Heater began his lightkeeping career in 1893 at Stannard Rock Lighthouse, where he worked his way up from third assistant to first assistant, before being transferred to Big Bay Lighthouse in 1897. Heater clashed with Keeper William Prior at Big Bay, and after one season there, he was transferred to Granite Island, from where he finally made head keeper with his appointment to Fourteen Mile Point in 1902.

In 1911, Ralph Heater was transferred to Grassy Island Lighthouse near Detroit and replaced by Henry Noel, his first assistant, but after one season, Heater and Noel swapped assignments, and Keeper Heater returned to serve a few more years at Fourteen Mile Point before being transferred back to Granite Island and then to Rouleau Point Range.

Fourteen Mile Point Lighthouse was staffed by just two keepers until 1898, when a second assistant keeper was assigned to the station.

In 1931, eleven-year-old Kenneth Whipple spent an action-packed summer at Fourteen Mile Point, where his father, Levi Whipple, was serving as first assistant to Keeper Edward McGregor. Thinking back on the experience years later, Kenneth wrote: I miss the remote light-house, the sky and water, the cries of the gulls, the dull roar of the sea, the whitecaps like herds of snorting stallions crowding shoreward with tossing manes. I miss the piercing, penetrating thunder of the steam fog whistle as it penetrated the shore-hugging fog banks and went rolling seaward. I miss the red and white beams of the light sweeping over the dark water.

A pack of wolves that roamed the woods near the lighthouse once treed Kenneth as darkness fell and, on another occasion, forced him, the keepers son, and a buck deer to charge into Lake Superior for safety. As exciting as these two narrow escapes were, they were topped by an encounter with a bear. Here is Kenneths account of that experience:

Bears were not uncommon at the light-house. If the smoke-house door was mistakenly left ajar after dark, the charred, oily smell of freshly smoked whitefish and lake trout would attract marauding bears which would overturn the metal building and swat it about. Even with his carbine my father, a tall man, could barely reach the highest scratch marks on the bear tree behind the station.

The red and white rays of the light washed over the three mountain ash trees in front of the tower and the two hammocks strung between where we made our makeshift tent. Russell, the sixteen-year-old keepers son and I were sound asleep in the tent, wrapped in warm, woolen blankets after an exhausting day of exploring and fighting imaginary bears.

I was suddenly awakened by a heavy paw attempting to intrude between my body and the canvas. Dad I thought, sleepily, but it was not his watch. It had to be Russell, initiating another round of bear antics. Come on Russ  I know youre not a bear, I protested.

There was a growling close to my face, and sharp objects began to penetrate the blankets. I shrank into the bottom of the hammock. Russell was certainly putting on a good show  realistic, too  did he have a pair of bear paws he had not shown me? I felt a suffocating, heavy pressure, and aimed a terrific blow at where I judged Russells mid-section to be. There was an instant roar, and he batted the hammock with blinding speed. I clung desperately to its edges as it swayed and bounded and snapped at its moorings. The assault stopped. I raised the blankets, and peered out to find myself staring into the face of a very large bear.

My throat was straining to scream but no sound came. Uncontrollably, I hurled the blanket high in the air and leaped out, square into his face. I was running in slow motion, and to this day I do not believe my feet touched the narrow sidewalk as I made for the brick porch with open arched windows. I floated across the cement floor and tugged mightily on the front door to the vestibule. It was painted shut. I glanced over my shoulder to see a large, black shadow lumbering across the lawn to the shore trail leading to Big Bay. There would be a bear hunt on the morrow!

There was indeed a hunt the next day. The keepers managed to track and kill the bear, but lost its carcass when they encountered a storm on the return to the lighthouse that swamped the rowboat being pulled by the stations launch.

At the opening of navigation in 1932, Clarence Lamb visited the station and installed a new lens, changing the characteristic of the light from a white light interrupted every twenty seconds by a red flash to a group of two red flashes every thirty seconds. In 1943, the lights characteristic was changed from group flashing red every thirty seconds to group flashing white every ten seconds.

Fourteen Mile Point Lighthouse was sold for $5,200 in 1957, and several years later, it was purchased by a second owner. From that point, the station started to show neglect. Windows were broken, and vandals began dismantling the structures, piece by piece.

On the morning of July 30, 1984, a passing sailboat noticed that Fourteen Mile Point Lighthouse was on fire and notified authorities. Jack Williams brought three Ontonagon firemen to the scene along with 350 feet of hose and two portable pumps with his boat Jenny Sue, but the blaze was already out of control when they arrived. The firefighters managed to keep the flames from spreading to other structures, but when the men left the point that evening, all that was left of the lighthouse was its brick walls and cast-iron lantern and watchroom. The blaze was apparently started by campers at the lighthouse who failed to extinguish their fire.

In the early 1990s, John and Susan Hatch and Don Hermanson purchased the lighthouse and set about restoring the fog signal building. Hermanson runs Keweenaw Video Productions in Houghton and has produced several DVDs on haunted lighthouses and lighthouses of the Upper Peninsula.

For a larger map of Fourteen Mile Point Lighthouse, click the lighthouse in the above map.

It is possible to walk along the shoreline of Lake Superior to reach Fourteen Mile Point Lighthouse, but the hike is twelve miles round-trip. Reports are that the hike is quite strenuous and requires fording a stream or two.

An easier way to see the lighthouse is by boat or plane.