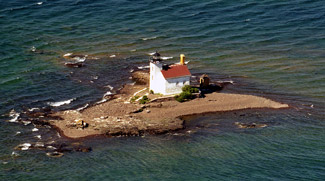 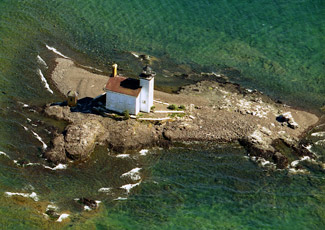 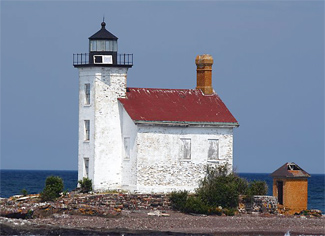 A lighthouse was built in 1849 on Manitou Island, situated three miles off the tip of the Keweenaw Peninsula, and in 1863 a committee appointed by the Lighthouse Board recommended that another light be established to mark the narrow channel between Manitou Island and the peninsula. The committee backed their recommendation with the following information:

Manitou light is admirably situated for the general navigation of the lake. But the commerce and navigation of Lake Superior are very much influenced by the configuration and contents of the southern coast. From this there extends into the lake a remarkable projection, called Keweenaw Point, which immediately attracts the attention on a glance at the map. It is in the form of an immense horn, slightly curving to the east, about eighty miles long, and about forty-five miles wide where it joins the main land. Along the whole length of this projection there extends a belt of trap rock, in which is found the peculiar riches of this district. This is in the masses of pure copper, of such magnitude that their bulk becomes the principal obstacle to their easy mining.

The points of entrance to the copper mines on the projection, which is the location in which the metal is known to occur, are on the east and west sides, and consequently there is a much greater amount of commerce from point to point along the shore of the lake than formerly, and this change requires additional lights, while those which now exist still retain their original importance. The light which was intended to direct the mariner in his course from the head of the lake, in rounding this great projection, is placed on the outer side of a large island [Manitou Island] lying beyond the extremity of the point; and although this is still of the same importance to the object for which it was originally thus placed, it is of no value to the vessels which pass from points of interest on the west side of the projection to those on the east, since the course of these vessels is between the island mentioned and the extreme point of the projection.

Rather than place the new light on the tip of Keweenaw Peninsula, the Lighthouse Board asked that Gull Rock, a tiny island lying just west of Manitou Island, be reserved for lighthouse purposes, and Congress appropriated $15,000 on July 28, 1866 for the construction of the lighthouse.

A work party arrived at Gull Rock in the spring of 1867 and was expected to complete the lighthouse there followed by range lights near Munising, but the drowning of William Tunbridge, the foreman in charge of the projects, delayed work on the range lights until the following season. Gull Rock Lighthouse was built in the schoolhouse-style, with a forty-five-foot-tall, square, brick tower centered in the gable end of a seven-room, one-and-a-half-story keepers dwelling. A fourth-order, Barbier and Fenestre Fresnel lens, mounted atop a cast-iron pedestal in the towers decagonal lantern room, first exhibited its fixed red light on the night of November 1, 1867. Thomas Jackson was hired as the lights first keeper, but he was removed before the opening of the 1868 navigation season and replaced by Stephen Cocking, a Civil War veteran.

When Keeper Cocking arrived to open the lighthouse for the season on May 13, 1873, he noted that ice was stacked up to a height of six feet on Gull Rock. Roughly the size of a football field, Gull Rock rises just twelve feet above Lake Superior, and with 100 miles of open water to the north, the rocky islet is often washed by waves during storms. On October 26, 1875, Keeper Cocking reported on one such occasion: The huge waves are striking the lighthouse, some tremendous blows today. The doors of the boathouse are being smashed by their pounding.

A frame boathouse was located on the southern side of the rock and had crib landings that extended to the east and west. A forty-foot-long, rubblestone retaining wall was built near the northeast corner of the lighthouse in 1901 to provide protection from the waves. Other structures at the station included a brick privy and an oil house.

John Nolen was serving as assistant keeper of Gull Rock Lighthouse when Norman H. Guilbault, the head keeper, passed away in March 1888. Nolen was promoted to head keeper and served in that capacity for another fifteen years, far longer than any other head keeper at Gull Rock. After the close of the 1899 shipping season, Keeper Nolen rented a one-bedroom home in Calumet so his seven-year-old-son Jamie could attend school. One day in January 1900, Jamie came home from school complaining of a sore throat and a headache. He was put to bed early that evening, but the following morning, he had trouble swallowing his breakfast, and the decision was made to keep him home from school.

By that evening, Jamies body was covered with red spots. Keeper Nolen rushed to the constables house to inquire about a doctor and learned that several other children had the same symptoms. A doctor from Houghton diagnosed the outbreak as Scarlet Fever and recommended that Jamies parents apply a vapor rub on his throat and chest, and soak him in ninety-degree water to soothe the rash. The treatments helped little, and Jamie passed away on February 9, along with two other children in the village. On March 13, three-year-old Violet Nolen followed her brother to the grave, leaving the Nolens childless. The following month, the Nolens returned to Gull Rock, where Keeper Nolen documented the passing of his children in the stations log and then penned this poignant tribute: O! How we long for the touch of those little vanished hands  and the voices we loved that are still.

On June 25, 1913, an automated acetylene light with a characteristic of a red flash every three seconds commenced operation in the lantern room at Gull Rock, and maintenance of the lighthouse became the responsibility of the keepers at Manitou Island Lighthouse. Herbert P. Crittenden, who had been in charge of Gull Rock since 1910, was transferred to Manitou Island.

In early November 1913, just months after Gull Rock Lighthouse was de-staffed, a blizzard with hurricane-force winds struck the Great Lakes, killing more than 250 people, sinking nineteen ships, and grounding nineteen more. One of the six ships that went aground in Lake Superior was the 472-foot-long L.C. Waldo, which was loaded with iron ore. Downbound from Two Harbors, the L.C. Waldo was pummeled by mountainous waves on November 8, one of which tore away its aft pilothouse and steering compass. Captain Duddleson and other members of his crew jumped down the stairs into the masters cabin so they wouldnt be swept overboard and rushed to the steering station in the forward pilothouse. With a compass taken from a lifeboat and illuminated by the flickering light of a lantern , Captain Duddleson tried to steer his ship to shelter behind the tip of the Keweenaw Peninsula, but in so doing ran aground on Gull Rock.

Not long after grounding, the steamer broke in two, cutting the crew off from the provisions and extra clothing stored in the aft part of the vessel. A bathtub was converted into a stove to keep those aboard from freezing, and two cans of tomatoes were divided amongst them. The keepers and surfmen at the Eagle Harbor and Portage Lifesaving Stations were awarded gold medals for rescuing those aboard the L.C. Waldo. Their heroism is recorded in the 1915 Annual Report of the United States Coast Guard:

[The preceding were] awarded gold medals July 15, 1914, for heroic conduct in rescuing 24 persons from the steamer Waldo, of nearly 5,000 tons burden, which was driven on Gull Rock, off Keweenaw Point, Lake Superior, on November 8, 1913, in perhaps the most furious storm, with heavy snow, that has ever visited the lake. The wind was about 70 miles an hour and the sea very rough. The vessel broke in two, and the imperiled people took shelter in the cabin, where they were compelled to remain for 90 hours without food.

News of the wreck reached the Eagle Harbor station on November 9, and the crew made a brave effort on that day, in a power surfboat, to reach the vessel. After having proceeded 8 miles, it was found impossible to go farther, on account of the great amount of ice which burdened the small boat, and return was made to the station. The lifeboat, larger and more powerful, was undergoing repairs when word concerning the wreck was received, and when it was found impracticable to effect a rescue with the surfboat, the crew returned to their task and put it in condition to go to sea. The power lifeboat was launched at 3 a. m. on the 11th, and after making way against almost insurmountable seas, and being exposed to the snow and freezing wind for four hours, the crew reached the Waldo, 32 miles from the station.

Information concerning the disaster was not received at the Portage station until noon on November 10. The shortest distance to the wreck was 60 miles, but the keeper, in order to avail of the protection afforded by the ship canal to Portage Entry and thus avoid the terrific sweep of the wind, chose the latter route, which made the distance to the Waldo 80 miles. In response to a message sent by the keeper before starting, a tug met the power lifeboat as it emerged from the canal and towed [it] to the scene of the wreck, which was reached at 3 oclock a. m. on the 11th.

While the thick ice which encased the Waldos cabin was being chopped away to free the suffering men and women, the Eagle Harbor crew arrived. Both lifeboats were practically ice-logged, which added to the difficulties and increased the hazard. With able maneuvering, in the face of great danger, the life-savers were able to take the 22 men and 2 women into their boats, and all hands, and the ships dog, were safely landed at Houghton, Mich.

In awarding a gold medal to each of the keepers and surfmen who participated in this notable rescue, the department recognized the display of a degree of good judgment, skill, and undaunted heroism which stands with the most praiseworthy instances of efficiency and bravery in the annals of the service.

Under the provisions of the National Historic Lighthouse Preservation Act of 2000, Gull Rock Lighthouse was offered for free to eligible government entities and non-profit organizations in 2002. In July 2005, the lighthouse was jointly awarded to the Michigan Lighthouse Conservancy, based in Fenton, and Gull Rock Lightkeepers of Copper Harbor. The Lightkeepers group was formed in 2004 by Peter Annin, a former Newsweek correspondent and managing director of Notre Dame Environmental Change Initiative.

After a few years of fundraising, a new cedar shingle roof was placed atop the lighthouse and a new tin roof atop the privy during the summer of 2008. Also that year, volunteers cleaned out debris inside the lighthouse from collapsed floors, ceilings, walls, and the roof. Enough material to fill a few dumpsters was transported to a regional landfill by landing craft. The interior deterioration was mainly due to a piano-sized hole in the lighthouses roof that was patched by the Coast Guard in 1988. Years of exposure to moisture caused the second floor to collapse onto the first floor, some of which then pancaked down into the basement.

Aided by four grants from the Michigan Lighthouse Assistance Program, which is administered by the State Historic Preservation Office and funded by proceeds from the sale of Save our Lights license plates, Gull Rock Lightkeepers have also repaired the privys foundation, installed temporary windows in the lighthouse, and restored the subfloors. After a complete restoration, the Lightkeepers hope to allow public access to the light through a fellowship program open to scholars, scientists, and artists as well as eventual tours by the general public.

For a larger map of Gull Rock Lighthouse, click the lighthouse in the above map.

The lighthouse's fourth-order Fresnel lens is on display at Great Lakes Shipwreck Museum at Whitefish Point.