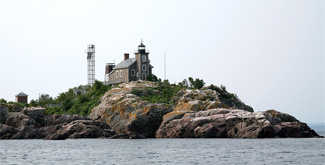 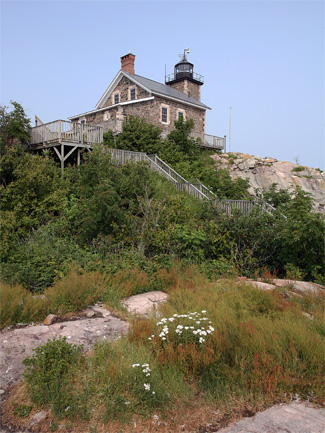 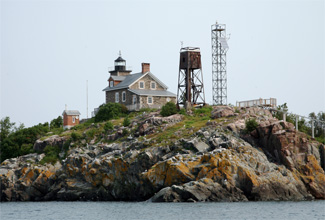 In 1863, a committee was dispatched to the Great Lakes to determine the necessity of a few newly proposed lighthouses and the desirability of re-establishing discontinued lights. While examining these predetermined sites, the committee also noted the need for additional lights on Lake Superior to support the growing copper and iron ore trade of the Keweenaw Peninsula. One of these additional lights was proposed for Granite Island, and in 1866 the Lighthouse Board requested $20,000 for the light, after providing the following information:

A light-house at Granite island, off Marquette, is also much needed. This island, two and a half acres in extent, is a granite rock, rising almost perpendicularly out of the lake, (Superior,) with good water all around it. The Marquette light cannot be seen by vessels coming from Portage until they are almost abreast of the light and have passed Granite island, which is directly in their track. A light-house with proper fog-signal would greatly facilitate navigation at night and during thick weather.

Congress provided the requested amount on March 2, 1867, and a deed to the entire island was obtained on April 16, 1868 from the State of Michigan, which had to procure the island from its private owner by condemnation. The recently acquired Haze, the first steam propeller-driven lighthouse tender to serve the Great Lakes, delivered the construction materials to Granite Island from Detroit shortly after the opening of the 1868 navigation season. A landing platform was built on the island, ten feet above the water, and from there track was laid to the top of the island, which had to be blasted away to create a suitable place for the lighthouse. A portable steam engine atop the island provided the power for pulling the materials up the track.

The lighthouse was built of rough-cut granite blocks, taken from the Huron Islands, with cut limestone being used as quoins on the structures corners and as lintels above and below the doors and windows. The lighthouses ten-foot-square tower stands forty feet tall and is attached to the northern gable of the eight-room, one-and-half-story keepers dwelling. A fixed, fourth-order Henry-Lepaute Fresnel lens was installed atop a cast-iron pedestal in the towers decagonal lantern, along with three flash panels that revolved around the lens atop nine chariot wheels. Equipped with ruby glass screens, the flash-panel assembly completed a revolution every four-and-a-half minutes and helped create the unique characteristic of a fixed white light interrupted every ninety seconds by a red flash. The light, which had a focal plane of ninety feet, was placed in operation at the opening of the 1869 season.

On August 30, 1872, fifty-seven-year-old Isaac P. Bridges, the first keeper of Granite Island Lighthouse, drowned while traveling to his home. His family saw his boat capsize but could not do anything to assist him.

Granite Island, situated twelve-and-a-half miles north of Marquette, was now clearly marked during clear nights, but it still remained a serious obstruction to navigation during thick or foggy weather. The Lighthouse Board proposed a fog signal for the island in 1870, but it wasnt until 1879 that the fog bell from Thunder Bay Island, made unnecessary by a steam whistle, was relocated to Granite Island. The 1,500-pound bell, cast by J. Bernhard & Co. of Philadelphia, was hung in a skeletal frame tower that was fifteen feet square at its base and nine-and-a-half feet at its top, which was enclosed to house the striking apparatus. The original wooden bell tower was replaced in 1910 by the present metal tower, fabricated by Champion Iron Co. of Kenton, Ohio.

To make the dangerous task of accessing the island a little more probable, landings were built on both the north and south sides of the island. Depending on the direction of the wind and sea conditions, the keepers would choose the better site for landing.

An oil house with a capacity of 500 gallons was erected on the island in 1905 using concrete blocks poured at the lighthouse depot in Detroit.

Shortly after Assistant Keeper John McMartin launched the stations boat on October 2, 1903 for a trip to Marquette, a fresh wind caught the vessel and sent it smashing against the islands rocky shore. McMartin plunged into the icy water and drowned. A few days later, the steamer Marigold brought a replacement boat to the island, and Anna Carlson, wife of the keeper of Marquette Harbor Lighthouse, filled in as assistant keeper until a permanent one was appointed.

James Wheatley served as keeper at Granite Island through at least 1913 and passed away in Marquette on June 15, 1915 at the age of eighty-two.

Dad was always thinking of different kinds of amusements. One thing I remember was the toad picnic. Hed lay out a sheet of flypaper on the ground and then collected a bunch of toads and set them around the paper. Of course, the paper drew flies and the toads had a feast.

He cleaned out a rock pool alongside the launchway for Romayne [Grants sister] and I to wade in. I had a vivid imagination. One time, Im not sure why, but I thought I saw some kind of animal in the pool and I wouldnt go near it. There must have been a rock sticking up that I took to be the animals head.

Granite Island Lighthouse, which had been added to the National Register of Historic Places in 1969, was sold by sealed bid on October 19, 1999. Melissa Green, the General Services Administration officer in charge of selling the island, noted that appraisers hadnt been able to determine the worth of the island. Its like trying to price an acre of land on the moon, theres no comparison basis, she said. Stephen Lyons, chief warrant officer for the Coast Guard in Marquette, seemed to have an idea of what he thought the island was worth. Its a rock in the middle of the water with a building thats in bad shape. I dont know what somebody would do with it.

Of the eighty-five bids submitted, Scott Holmans bid of $86,003 was the highest. The second-highest offer was $80,000, while the low bid was just $11. While attending Northern Michigan University in the late 1950s, Holman dove shipwrecks around Granite Island and was thus very familiar with the lighthouse. Holman later founded Bay Cast, a steel castings suppliers, and served as director of the Great Lakes Shipwreck Historical Society for several years.

Holman couldnt find a contractor in Marquette that would touch the lighthouse restoration job. He ferried several out to the island on April 27, 2000, but none were interested. Eventually, Holman hired Stan Stenson, a carpenter from the village of Covington, who assembled a special team for the project. The lighthouse had a hole in the roof when the work started in 2000, but over the next two-and-a-half years the team transformed the structure into a thing a beauty, while camping on the island in tents.

The restoration work carried out at Granite Island included replacing the water-damaged plaster walls with sheetrock, crafting new historically-accurate windows and doors, rewiring the lighthouse and connecting it to wind generators and solar panels, and repairing the islands walkways and 400 steps. Holman made hundreds of trips ferrying contractors to and from the island, and the total repair bill was in the six figures. Im telling you this, you cannot restore a lighthouse with bake sales, Holman said. I can never get over the fact that they built this whole darn thing in one summer, and it took me two-and-a-half summers to repair it with all the materials and technology we have today.

For a larger map of Granite Island Lighthouse, click the lighthouse in the above map.

The best views of Granite Island Lighthouse come from the water near the island.

The island and lighthouse are privately owned. Grounds/dwelling/tower closed.