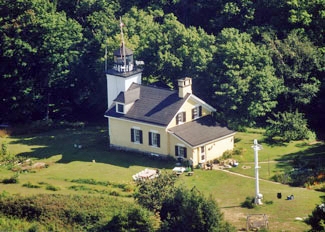 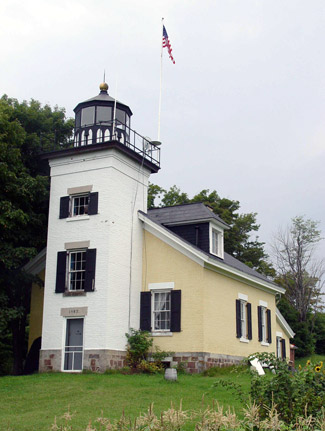 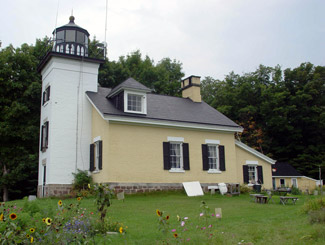 In 1852, the superintendent of lights for the upper lakes recommended that $5,000 be provided for a lighthouse on Grand Island. The Lighthouse Board did not have the requisite detailed information to determine if the lighthouse was absolutely necessary, but it noted that there was no risk in providing the money as the law required the Topographical bureau to evaluate the necessity of the light before construction began.

Congress appropriated $5,000 on March 3, 1853 for a lighthouse on Grand Island, and a contract for its construction was awarded in 1854. A site atop the towering cliffs on the northern end of the island was selected, and construction was carried out during the summer of 1855. The lighthouse was equipped with a revolving fourth-order, L. Sautter Fresnel lens that produced a white flash at a focal plane of 204 feet above Lake Superior, though the lantern room was situated just thirty-two feet above the ground. The light was placed in operation in 1856 and served as both a coast light and a harbor light for the many vessels that started sailing along the southern shore of Lake Superior following the opening of the Soo Locks in 1855.

A series of substantial ladders and steps were built in 1860 on the cliffs near the lighthouse to provide access to the lake. In 1865, Grand Island Lighthouse was found to be in a wretched condition, on account of the inferior materials employed in its original construction, and the Lighthouse Board requested funds so that the lighthouse, which was difficult to access, would require no repairs for years to come.

Congress provided $17,000 on July 23, 1866 to rebuild the lighthouse, and the following year the old tower and dwelling were torn down, and a new lighthouse erected. This new lighthouse was built atop a cut-stone foundation and featured a nine-foot-square brick tower attached to the western gable of a one-and-a-half-story brick dwelling. The fourth-order Fresnel lens, equipped with two bulls-eye panels, was installed in the new towers decagonal lantern room.

One of the early keepers of Grand Island Lighthouse was William Cameron, a Canadian, who was educated at Toronto in European languages and literature and then moved to Sault Ste. Marie, where he became fascinated with Chippewa culture. Cameron married Sophie Nolan, a Chippewa woman, with whom he raised eleven children. The Camerons always spoke English to each other and made sure that their children were educated in both languages. It wasnt until the early 1870s, when he would have been in his late sixties, that Cameron became keeper of Grand Island Lighthouse.

Keeper Camerons education and appreciation for literature is evident in the following entries he made in the station's log:

July 22, 1872  A very busy night fighting large blue Miller moths off of the outside of the plate glass with an old feather brush. We almost despaired conquering them, they were actually in myriads although it was drizzling rain. But fortunately a puff of cold air from the Lake about 3 oclock a.m. caused them to vanish as suddenly as they appeared.

Nov. 30, 1872  It has been one continued snow storm and the wind blowing a perfect gale ever since the night of thirteenth. We extinguish the Light this morning as it is winter. The thermometer stood at 8 degrees below zero this morning and there is two feet of snow on the level in the woods. The icebergs are almost as high as they were at any time last winter. The wind has blown more furiously within the last few days than at any time since we have had charge of the light. The seas rose up the stairway eleven feet higher than has ever known before and has torn away 43 feet of the stairway, the spikes that we used being too short.

To our surprise we perceived a steamer out in the Lake, making her way down in spite of the wind and weather; she appears to be one of the new iron vessels that came out last year. The sight of the steamer compels us to light up for a few days longer. The only trouble in keeping the light in this severe cold weather is the ice making on the outside as well as the inside of the plate glass. We have used up all our salt and we are encroaching on the supply of Spirits of Wine rather beyond the regulation. But we must keep the ice off some way...

Aug. 10, 1873  This is Sunday. I have had great pleasure in dining with Mr. & Mrs. Weisner on board the Steamer Surveyor, in whose company, I have enjoyed three of the most delightful hours that I have ever spent in my life. I consider it one of the angels visits which seldom falls to the lot of a secluded light-keeper.

Aug. 15, 1873  After having passed so pleasant a time in the society of Mrs. Weisner and the gentlemen on board, we can well appreciate the sentiments of the poet who wrote the following lines:

When friendships have withered,
and fond hopes have flown,
Oh who would inhabit,
This drear world alone.

So we say as we watch the little steamer as she vanishes in the haze.

Aug. 24, 1873  At 2:30 a.m. an eared owl (the large kind) sat perched upon the railing of the tower, as sedate and important as a Judge Advocate upon a court martial. But when the bulls eye of the lens would flash upon him, he would throw up his wings and cast his head down, as much to say, I submit! But no sooner would the flash be off him, when he would hoot as if called, Come on McDuff...he finally retired to his native forest where he came across a brother chum with whom he had quite a conversation. Although I am an old resident...in the woods...I never could learn their language thoroughly, which prevents me from committing his honors discourse to paper.

In 1885, the combined stairway and tramway, which led 229 feet from the top of the cliff down to the boathouse on the lake, was rebuilt and fitted with a new car. The boathouse was located roughly a half-mile southeast of the lighthouse and was accessed by a trail that crossed four deep ravines spanned by bridges that had lengths of twenty-five, seventy, sixty-nine, and forty-five feet. A boat landing, made of logs from the island and filled with stone, was built in 1902.

Over the years, Abraham Williams, the islands first permanent settler, purchased large tracts of land on Grand Island from the State of Michigan, and on March 3, 1887, Congress appropriated funds to buy the north tip of the island from the state to protect the governments lighthouse reservation. The Lighthouse Service later decided it didnt need all the acreage it had acquired, and on June 10, 1901, some 393 acres were sold at public auction, leaving 91.45 acres around Grand Island Lighthouse.

In 1907, thirty-six concrete slabs were made at the Detroit Lighthouse Depot and transported to Grand Island to be used as cement walks. A brick oil house was added to the station in 1909.

On June 12, 1908, a boat belonging to Grand Island Lighthouse was found floating offshore near Au Sable Lighthouse with a body aboard whose head was disfigured beyond all recognition. The corpse, which had a tattoo of thirteen stars on its left arm, was soon identified as Edward S. Morrison, the recently appointed, thirty-year-old assistant keeper of Grand Island Lighthouse. An investigation conducted at the lighthouse found that the supplies Keeper Genry brought back to the lighthouse on June 6 were piled on the stations dock, and that the last official entry in the stations logbook had been made on June 5 by Morrison. No sign of Keeper George Genry, who had been in charge of the lighthouse for fifteen years, was found until R.C. McKenzie spotted the keepers body on Lake Superiors shore, twenty miles east of Munising, in early July while checking on the development of a blueberry patch.

The keepers had been paid on June 6, leading many to believe that the two men had been robbed, murdered, and then pushed off into the lake in the stations boat. Since it took several weeks for the body of Keeper Genry to be located, some deduced the senior keeper had murdered his assistant and set off for Canada. A theory supported by children of Keeper Genry is that the keeper of the islands game reserve had the men murdered for killing some of the exotic animals that strayed onto the lighthouse reservation. In 1900, Cleveland Cliffs Iron Company, under the leadership of William Mather, acquired most of Grand Island from the Williams family and transformed it into a little Yellowstone, featuring several log lodges and imported caribou, moose, elk, and small game. The official cause of death for Edward Morrison was listed as exhaustion, result of exposure in an open boat in Lake Superior, but it seems the details surrounding the death of the two keepers will forever remain a mystery.

In 1961, the brick lighthouse was abandoned, and a battery-powered light commenced operation atop a twelve-foot-tall metal post erected nearby.

Dr. Loren Graham, a professor who has taught at the Massachusetts Institute of Technology and Harvard and is a leading scholar on Russian science, purchased Grand Island Lighthouse in 1972. Loren and his wife Patricia, who is a prominent historian and former dean at Harvard, lovingly restored the lighthouse and outbuildings for use as a summer retreat where they spend a lot of time writing. Dr. Graham published The Face in the Rock: the Tale of a Grand Island Chippewa, which provides both a human and natural history of the island, in 1995, and followed this up in 2013 with Death at the Lighthouse, which explores the 1908 death of Keeper Genry and his assistant.

Pat Graham recalled the sorry state of the lighthouse when they took it on. It was a wreck, she said. There was no pane of glass left in it; there wasnt a door left attached; there was a great hole in the kitchen floor that dropped you into a cistern in the basement. We had no water, no power, no electricity; it was pretty primitive.

In 1990, the Cleveland Cliffs Iron Company sold Grand Island to the Forest Service for $3.5 million, and Congress designated the island a national recreation area. Passenger ferry service to the island is available, and bus tours of the southern end of the island have been offered since 2001.

The Grahams revealed in 2014 that they have been attempting to gift the lighthouse to the Marquette Regional History Center for the last twenty years but regulations and tribal issues have been making it difficult.

For a larger map of Grand Island Lighthouse, click the lighthouse in the above map.

As Grand Island North Lighthouse is privately owned and sits atop a 165-foot cliff, the best views of it come from the air. Riptide Ride circumnavigates Grand Island and passes by the lighthouse.

A ferry to and tour of Grand Island are available, however, the tour does not go near the lighthouse, which is located on private property.