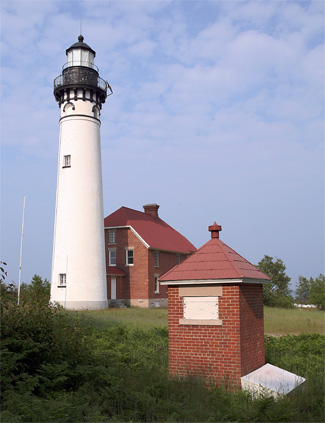 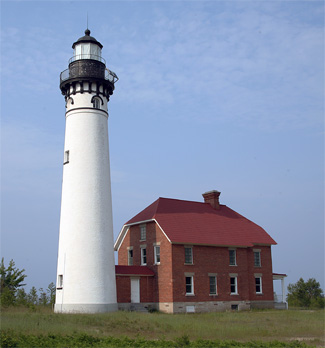 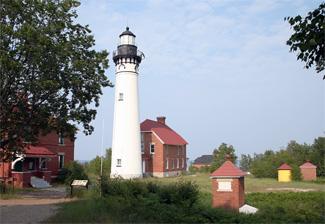 Two of the early lighthouses established on Lake Superior were at Whitefish Point in 1849 and on the northern end of Grand Island in 1856. In 1867, the Lighthouse Board lamented the fact that the eighty miles between these two early lights remained unmarked and requested $40,000 for a lighthouse to rectify this situation. The Lighthouse Board repeated its request annually, and then in 1871, it added that the lighthouse was more needed than any other light in the district. This seems to have prompted Congress to act, as the following year $40,000 was appropriated for a light between White Fish Point and Grand Island Harbor. The Lighthouse Board selected Big Sable Point, named for the towering nearby sand dunes, as the site for the lighthouse, and work at the point commenced in July 1873. A circular brick tower was built atop a cut-stone base with cut-stone lintels and sills. The eighty-six-foot-tall tower tapers from a diameter of sixteen-and-a-half feet at its base to twelve feet, eight inches at the circular gallery that is supported by sixteen cast-iron corbels. A spiral cast-iron stairway leads to the top of the tower where arched windows provide light for the watchroom. A third-order, L. Sautter & Cie. Fresnel lens was installed in the towers lantern room to produce a fixed white light, which thanks to the lofty bluff on which the lighthouse stands, has a focal plane of 107 feet.

For the convenience of the keepers, a twelve-and-a-half-foot-long passage was built to link the base of the tower to the two-story dwelling. While the tower was whitewashed, the redbrick dwelling was left unpainted.

By the end of June 1874, work at the station was finished except for plastering, outside whitewashing, and installing the Fresnel lens. After this work was finished, Keeper Casper Kuhn displayed the light for the first time on the night of August 19, 1874.

Gus Gigandet arrived at Big Sable on May 21, 1884 to take charge of the station and noted in the stations logbook that he was Contented and Satisfied whit the Station. On July 24, 1893, Keeper Gigandet recorded that during a thunderstorm that day, lighting struck the tower at 9 p.m., boring two holes in the bottom of the tower right at the foot of the Stairs, burning and damaging the paint in several places about the floor.

On July 17, 1891, the passenger steamer Empire State ran aground on a reef near the station in a thick fog. The twenty-four passengers and forty crewmembers all came ashore at the lighthouse, where they were accommodated until the passengers were placed aboard the India the following day, and the crewmembers left on the 20th. After being ill two weeks, Keeper Gigandet died at the station on October 29, 1896.

While the light was appreciated by mariners, it wasnt much assistance in thick weather. In 1892, the Lighthouse Board made the following plea for a fog signal at Big Sable:

This important light-station is on the southern shore of Lake Superior, about halfway between Marquette and White Fish Point. The entire traffic of Marquette, which, it was stated, was some 1,772,400 tons in 1890, passes close to this station, and in time of southerly gales the whole commerce of Lake Superior hugs the south shore. A steam fog signal is required to complete the satisfactory equipment of the station. It is estimated that it can be established at a cost not exceeding $5,500, and it is recommended that an appropriation of this amount be made therefor.

The funds were finally provided on June 11, 1896, and the necessary boilers and machinery were delivered to the Detroit lighthouse depot that September. A working party and construction material were landed at Big Sable in the spring of 1897, and a twenty-two by forty-foot, redbrick fog signal building was completed in June. To provide water for the ten-inch steam whistle, a crib, fitted with a well box, was built and sunk in Lake Superior. The fog signal was placed in operation on September 1, 1897 and was typically in operation about 150 hours each year, but in 1907 it sounded for 525 hours while consuming thirty tons of coal.

A brick oil house was built at the station in 1895, and a wood shed was added in 1904. Also in 1904, the iron smokestacks atop the fog signal building were replaced by a forty-foot-tall brick chimney, and a brick cistern was built for the fog signal water supply. A roadway from the station to the public highway was cut through the surrounding woods in 1905. In 1906, a sixty-eight-foot-long seawall was built of rubblestone laid in cement mortar to protect the stations boat landing and water supply crib.

In 1909, the original dwelling was remodeled to create two separate apartments for the assistant keepers, and a new two-story dwelling was built west of the tower for the head keeper. The station was attended by two keepers, a head keeper and an assistant, until a second assistant was added in 1904.

On August 29, 1913, the intensity of the light was increased from 1,200 to 28,000 candlepower by changing the illuminant from oil to incandescent oil vapor. The fog signal was converted on October 15, 1928 to an air diaphone that sounded two one-and-a-half-second blasts every thirty seconds.

Lighthouses keepers often went to the assistance of mariners, and a fine example of this is the following account by Keeper Klaas Hamringa:

On November 30, 1929, steamer Kiowa drifted 6 miles west of the light station, with a northwest gale. The crew launched a lifeboat, Saturday, which capsized, drowning five of the men. Everything on board the Kiowa was coated with ice, making it impossible to launch the boats. The steamer was on the side, stern down, with a 45 degree list. Mr. Chilson and two others were coming from a hunting trip west of the light station at 2 p.m. Sunday in a small gas boat, with rowboat in tow. Seeing the steamer, they picked off three men, and made for the lighthouse, as the wind began to pick up from the northeast. The men were almost frozen.

We immediately sounded the whistle at 2 p.m. and gave danger signals for an hour or so. We could not see help coming, so we launched our gas boat. We started about dusk and it was dark when we arrived at the steamer Kiowa. Six men were accommodated in the gas boat 5 in the rowboat, and 5 in Chilsons boat. When we had the crew all off and were about a mile from the boat, following the shore line, making for a hunting camp about 4 miles from the station we saw the light of the Coast Guard boat coming. Flashing them signals, we ran alongside and put 16 of the crew on the Coast Guard boat, which took them to Grand Marais.

Keeper Hamringa, and his two assistants, John Hamann and William Campbell, were commended for the assistance they gave the crew of the Kiowa.

The characteristic of the light was changed from fixed white to a group of two white flashes every fifteen seconds in 1944. Au Sable Lighthouse was automated in 1958, and its keepers withdrawn.

In 1968, Au Sable Light Station became part of the surrounding Pictured Rocks National Lakeshore, which had been created in 1966. When the stations third-order lens was removed from the tower sometime after 1972, it was placed on display at the old Grand Marais Lifeboat Station, which doubled as a maritime museum and the lakeshores ranger station. After the lantern room was restored, the lens was returned to its rightful home atop Au Sable Lighthouse in 1996.

In 2010, the Park Service celebrated a nearly thirty-year-long effort to rehabilitate the structures and landscaping at Au Sable to return the station to is 1909 appearance. Some of the final projects included whitewashing the tower, replacing pressed metal roofs, and restoring auxiliary structures. Volunteer light keepers now live in the upper floor of the head keepers dwelling and provide tours to visitors during the summer months.

For a larger map of Au Sable Point Lighthouse, click the lighthouse in the above map.

An informative webpage on Au Sable Lighthouse is available from the National Park Service. To reach the lighthouse, take H58 to the lower Hurricane River Campground. At the east end of the campground, you will find a trail that leads 1.5 miles to the lighthouse. The lighthouse can also be reached via a somewhat more strenuous 1.9-mile hike from Log Slide Overlook. Tours of the lighthouse are offered in the summer.

The lighthouse is owned by the National Park Service and is part of Picture Rocks National Lakeshore. Grounds open, dwelling/tower open in season.


In a 2006 visit to the lighthouse, we chose to hike from the Log Slide Overlook as the direct road over to Hurricane River from Grand Marais was closed, and we did not want to take the lengthy detour. The hike was great, but since the trail starts atop a high bluff, just know that you are going to have to come back up to that level as the lighthouse is located much closer to the surface of the lake. While the hike from Hurricane River passes some shipwrecks, the journey from the Log Slide Overlook provides some spectacular vistas from the lofty sand dunes lining that portion of Lake Superior.

During our return hike to the car, a fellow just a ways into the hike stopped and asked me if I would do him a favor. I answered "Sure," thinking he wanted me to check on his vehicle in the parking lot or something. Instead, he extracted a Power Bar wrapper from his shirt pocket and asked if I could pack it out for him. Though a bit shocked, I accepted the wrapper - anything to lighten the load of a fellow hiker.


Don't let those flat, straight roads of the upper peninsula tempt you into cutting down that inter-lighthouse travel time. While on our way to visit Au Sable, I passed an officer at a high rate of speed, prompting a personal roadside visit. The ensuing ticket was bad enough, but the officer also notified us that the license plate on our rental car belonged to an Oldsmobile and not the Chevrolet Blazer that we were driving. In addition, he said that he could not find our vehicle identification number in their database. Having apprised us of the situation, the officer returned to his car for some more investigation work, leaving us to ponder whether we would be spending the next several days in one of the numerous prisons found in the vicinity. While waiting, we at least were able to consume our lunch, and then were relieved when the officer permitted us to continue our lighthouse journey, although at a much reduced rate of speed.