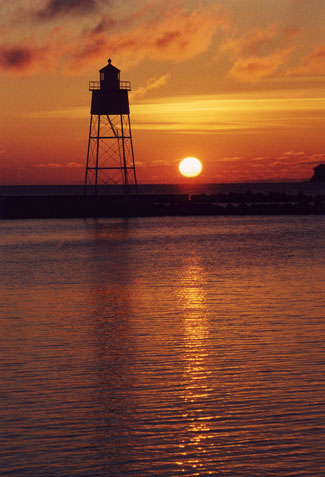 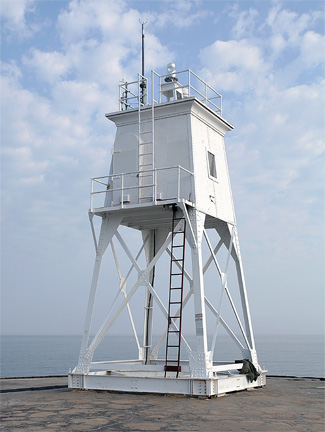 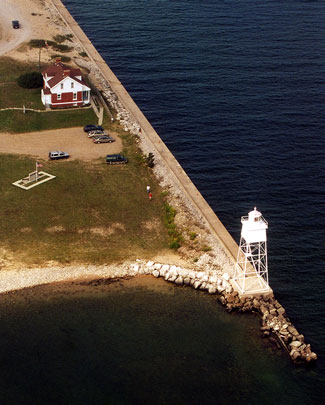 Grand Marais, French for great marsh, is a small town on the shore of Lake Superior with a spacious natural harbor. The Ojibwa Indians called the place Kitchi-bitobig or Great Pond, and it is believed that the French name for the place was originally Grande Mare, also meaning great pond, but the spelling was corrupted by cartographers. The first permanent settlement at Grand Marais was in 1861, when Peter Barbeau built a trading post. As entering the harbor at Grand Marais was difficult due to a bar with just nine feet of water over it, a federal project was adopted on August 5, 1881 to build a safe channel into the harbor, and thus create a harbor of refuge. Over the next decade, more than $250,000 was expended to construct parallel piers with a deep channel dredged between them, and then between 1895 and 1897, a dike was built east of the piers to close the natural entrance to the harbor and protect the anchorage during storms.

In its 1892 annual report, the Lighthouse Board made the following request for funds to erect a light for the new harbor of refuge.

There is no harbor between White Fish Bay and Grand Island. Grand Marais has been for some time under improvement by the United States as a harbor of refuge, and the work has now advanced to a point where it is desirable to light it. It is estimated that a suitable light and bell can be established here at a cost not exceeding $15,000, and it is recommended that an appropriation of this amount be made therefor.

Congress provided the requested amount on March 2, 1895, and in November of that year, the Point Iroquois bell tower, which had been replaced by a steam fog signal, was taken down and transported to Grand Marais, where it was bolted to the western pier and capped with a decagonal iron lantern room. The square, pyramidal tower stood forty-three feet tall, was open at its base, and had two enclosed rooms, one above the other, just beneath the lantern room. The upper room served as a service room for the light, while the lower room housed the striking apparatus for the fog bell and opened onto an elevated wooden walkway that led shoreward. The towers fixed white light and fog bell were placed in operation on December 10, 1895 by Keeper Samuel F. Rogers, who had previously been in charge of Spectacle Reef Lighthouse in Lake Huron.

After completing the pierhead light and bell, the Lighthouse Board had enough funds to construct a keepers dwelling and a second light to form a range, but as the appropriation was for just a light and bell, it had to ask for authorization to repurpose the money. On June 4, 1897, Congress passed an act that allowed the Lighthouse Board to build an additional light and complete the station as long as it didnt spend more than $2,000. A contract for a metal tower was made on September 27, 1897, and the tower was delivered to the depot in Detroit roughly two months later. After the inner end of the west pier had been strengthened, the metal tower was erected upon it the following June, and the rear range light was first exhibited on July 18, 1898.

The new iron tower stood nearly sixty-two feet tall, and like its companion front tower, was painted white with a black lantern room. The rear tower has an enclosed, eight-and-a-half-foot-tall watchroom, accessed by an iron ladder in two flights, and features a fifth-order, Henry-Lepaute Fresnel lens that originally produced a fixed white light.

The addition of a rear range light took priority over a keepers dwelling. Keeper Rogers, who was used to cramped quarters after having spent many years in the U.S. Navy, had been forced to build a small shack near the pier out of driftwood. Having spent most of his life at sea or at offshore lighthouses, Rogers, a bachelor, never owned any property before moving to Grand Marais in his sixties. A highlight of his Naval career was serving aboard the San Jacinta, which in 1860 captured the brigs Storm King and Boneta off the east coast of Africa and liberated nearly 1,300 slaves bound for the United States.

In repeated funding requests for a keepers dwelling at Grand Marais, the district inspector described Keeper Rogers make-shift accommodations as a miserable shantyneither decent nor healthful, a disgraceful affair, and the poorest kind of hut. Congress finally provided $6,500 for a new dwelling on February 26, 1907, but it was too later for Keeper Rogers, whose ill health forced him to resign in 1904.

Work on the keepers dwelling commenced June 10, 1908, and by the end of the month the concrete footings were laid, the foundation walls had risen to a height of six feet, and construction of the cistern had started. By the end of September, Keeper George Barkley was able to move his family into the new dwelling, which is similar to one built the same year for the range lights at Munising.

In 1905, the characteristic of Grand Marais Range Lights was changed from fixed white to fixed red so mariners could differentiate them from the lights along the shore, and the front tower was moved seaward near the end of the recently extended pier. An elevated metal walkway, 560 feet long, was built to bridge the gap between the existing walkway, and the front tower in its new location. A storm on January 6, 1906 carried away roughly 250 feet of the new walkway, but it was replaced the following May. A fireproof oil house was built near the keepers dwelling in 1909.

In November 1919, the 889-ton steamer H.E. Runnels had sought refuge at Grand Marais from a northwest gale, but on the morning of November 14, the captain decided the storm had abated and steered his ship back out into Lake Superior. After rounding Point Au Sable, eight miles west of Grand Marais, the Runnels encountered sixty-mile-per-hour winds, and the captain wisely decided to return to the harbor of refuge.

Due to blinding snow and a cross sea, the Runnels missed the harbor entrance, and while making its way back out into the lake, it suffered a steering gear failure. Unable to maneuver, the steamer was driven aground near the western side of the west pier. The nearby Coast Guard crew had been monitoring the steamers progress and was quickly on scene with its Lyle gun. A rope was fired out to the Runnels, but the line became so choked with ice, it was impossible to run a breeches buoy along it. Instead, the surfboats bowline was thrown over the rope leading to the Runnels to keep the surfboat pointed into the cresting waves, and four trips were made to remove the seventeen crewmembers from the ice-covered decks of the steamer. Some of the rescuers were washed overboard more than once, but not one was lost. Nine coastguardsmen and four men from Grand Marais were awarded Gold Lifesaving Medals for venturing out to save the crew of the Runnels. Though Otto Bufe, the lighthouse keeper at the time, didnt receive a medal, his effort in bringing survivors ashore was acknowledged by the Lighthouse Service. One of the gold medals awarded for the rescue effort can be seen in the 1938 Grand Marais Lifeboat Station, which serves as a maritime museum and as the ranger station for Pictured Rocks National Lakeshore.

Roger W. Campbell, keeper of the range lights in the 1930s, had twelve children with his wife Viola, before she passed away in the late 1920s. In 1933, Keeper Campbell made the local newspapers when he went to visit his son Lloyd at the Whitefish Coast Guard Station and became trapped there by two snowstorms, leaving his six motherless children all alone back in Grand Marais.

The Grand Marais Historical Society received ownership of the keepers dwelling in 1984, and the restored residence is now a museum displaying items from the early 1900s.

For a larger map of Grand Marais Lighthouse, click the lighthouse in the above map.

The museum in the keepers dwelling is open daily from 1 p.m. to 4 p.m. during July and August and is open for the same hours on weekends during June and September.

The lights are owned by the Coast Guard while the dwelling is owned by the National Park Service. Grounds open, dwelling open in season, towers closed.


A monument near the breakwater in Grand Marais echoes a warning found at the Presque Isle breakwater near Marquette: "The awesome beauty of Lake Superior has its dark side. The overwhelming force of its waves and its frigid waters can overpower even the strongest swimmer. Do not walk on the breakwall when waves are high."

Two freshmen drowned near the Presque Isle breakwater on October 4, 1988 after one of them was swept off by a large wave. Four years later, a similar tragedy occurred at Grand Maris: "On September 22, 1992, Trevor Capogrossa, 14, Chad Bradley, 16, and Clayton Lowes, 16, being challenged by invulnerable youth, and the extremities of an autumn storm, were washed from the pier by a tremendous 10 foot wave. Stan Bizek, 24, heroically defying Superiors fury, miraculously saved Clayton. Chad and Trevor will remain forever young in our memories. Friends of their families have donated this memorial and warning to others: May whoever be drawn to the breakwall, when waves are high, heed the warning, so that no other lives are lost."