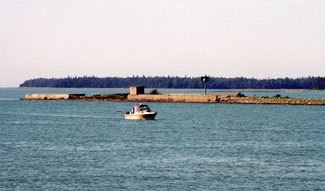 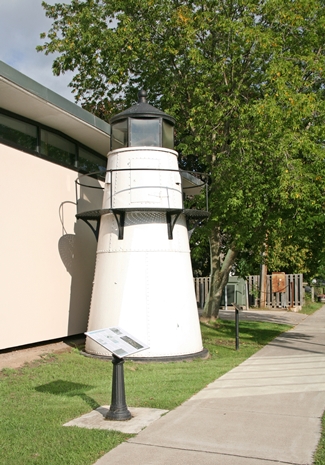 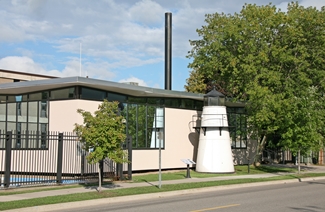 Tiny Frying Pan Island is located just offshore from DeTour Village and two miles upstream from the mouth of St. Marys River. Captain William Thorn, who reportedly was the first person to take a ship up St. Marys River and into Lake Superior, was windbound one day near the mouth of the river and decided to go ashore on a nearby island. After finding a frying pan left by Indians, Thorn named the place Frying Pan Island.

On March 3, 1879, Congress appropriated $2,000 for a beacon light to mark the island, but a deed for the one-and-a-half-acre island was not finalized until January 4, 1881. Due to the smallness of the appropriation, only a plain, small, wrought-iron unlined tower was erected, without even a storage shed let alone a keepers dwelling. The circular tower, made of quarter-inch steel plates riveted together, stood eighteen feet tall and tapered from a diameter of eight feet, four inches at its base to four feet, six inches at the lantern room. The tower stood atop a five-foot masonry foundation, capped by concrete, and a spiral cast-iron staircase led up to the lantern room floor from which the circular gallery could be accessed for cleaning the windows. The perforated steel-plate of the gallery floor was supported by cast-iron brackets and to it was secured a thirty-inch-high handrail made of one-and-a-quarter-inch pipe.

Frying Pan Island Light was first exhibited on October 1, 1882 by J.W. Church, but he must not have liked the job as he resigned the following month. Frank Bernard then took charge of the light and served on Frying Pan Island until 1891, when he was transferred just two miles upstream to Pipe Island Lighthouse, where he served for nineteen years.

While Keeper Bernard was minding the light, an eight-by-twelve-by-eight-foot oil shed was built on Frying Pan Island in July 1884 and fitted with shelves and a cleaning table. In case Keeper Bernard had to spend the night on the island, a bunk was built at one end of the shed. A new wooden oil house, ten by twelve feet in plan, was built in 1890, which allowed the keeper to live more comfortably on the island.

Keeper Joseph Riel, who replaced Bernard as keeper in 1891, was a close relative of Louis Riel, a Canadian revolutionary, who is known for founding the province of Manitoba and being a leader of the Métis people of the Canadian prairies.

The Annual Report of the Lighthouse Board for 1902 provides a snapshot of conditions on the island:

The island is a rock only a few hundred feet in circumference and but a few feet above the waters surface. No other structures are upon the island than those belonging to the Government. The keeper lives in a sort of shed consisting of but two rooms, and affording no adequate protection from the weather. A dwelling should be provided for the keeper at this station, on account of the severe climate. It can be placed upon the light-house site. It is estimated that a proper dwelling on this island will cost $4,000, and it is recommended that an appropriation of that amount be made therefor.

The requested money for a proper residence must have been promptly supplied as a new dwelling was constructed between the middle of April and June of 1902 at a spot 150 feet northwest of the tower. A storm house was built over the dwellings rear entrance in 1905. The new seven-room, two-story, wood-frame dwelling was finished with siding on the first story and shingles on the second story, and was topped by a metal slate roof. Its first story was painted green, while its roof and second story were red. After the completion of the new dwelling, the old one was used as a summer kitchen.

Nelson Abear served as keeper of Frying Pan Island Lighthouse for twenty years, starting in 1900. In 1917, Keeper Abear received special commendation from the Secretary of Commerce for the saving of life or property under conditions of peril or great difficulty. On December 22, 1916, Keeper Abear rescued two men in the disabled motorboat J.E.O., and five days later, he went to the assistance of the tug Rambler, which was trapped in ice near the lighthouse with a party of nine people aboard. After supplying them food, Keeper Abear safely transported the people aboard the Rambler, along with the mail the vessel was carrying, to DeTour Village.

A fixed red light was exhibited at Frying Pan Island using a sixth-order, Barbier & Fenestre, Fresnel lens until April 9, 1921, when the lights characteristic was changed to a red flash every two seconds. Not long after this change, the light was made unattended. A new light, known as Frying Pan Island Dock, was established atop a coal elevator, 700 feet south of the iron tower in 1935, and two years later, Frying Pan Island Lighthouse was discontinued.

In 1953, an electric siren fog signal was established on the island and two new lights, Frying Pan Upper and Frying Pan Lower, supplanted the coal elevator light. These flashing green lights were exhibited at a height of twenty feet form white skeleton towers, mounted on the north and south end of the islands coal dock. A fog bell replaced the siren in 1954, and in 1956, one of the two lights was discontinued, leaving just a single light to mark the island. A quick-flashing green light atop a pole marked Frying Pan Island in 2016.

On August 8, 1988, the Coast Guard removed the long abandoned Frying Pan Island Lighthouse from the island and took it back to their base in Sault Ste. Marie, where it was restored and fitted with new windows before being placed on display outside their headquarters.

For a larger map of Frying Pan Island Lighthouse, click the lighthouse in the above map.

From Interstate 75, take Exit 394 and go east on Easterday Avenue for one mile and then turn left onto Ashmun Street. Follow Ashmun Street for 0.7 miles to its end, and then turn right onto Water Street, where you will find the Coast Guard station.


The tall, white metal pole located in the Coast Guard parking lot just west of Frying Pan Island Lighthouse is also a historic navigational aid. It was reportedly used along with several others to light Rock Cut Channel after it was opened in St. Marys River.