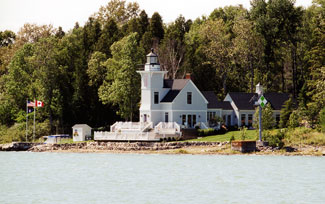 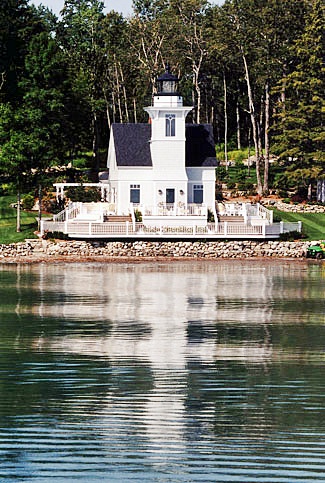 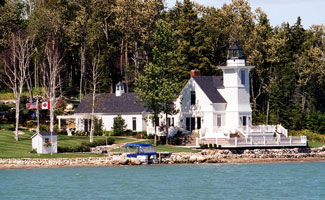 St. Marys River, which flows from Lake Superior to Lake Huron, became a vital transportation link following the opening of locks at Sault Ste. Marie in 1855, but it took several decades before the river was adequately marked and lighted. In 1890, the Lighthouse Board lamented the state of the rivers navigational aids between Pipe Island and Sault Ste. Marie:

The commerce of Lake Superior passes through this narrow, crooked river. Its navigation is now restricted by ice to eight months in the year, and by narrow and tortuous channels to the hours of daylight. The commerce of the river amounted, it is stated by competent authority, during the season of 1889, to 7,500,000 tons, and it is growing with such rapidity that it is already one of the important water-ways of the world. This enormous commerce, being confined to a little more than half of each twenty-four hours during the season of navigation, clogs the channels and renders their navigation slow and unnecessarily hazardous. The Board is of the opinion that if the system of proposed thirty-seven lights can be put into operation St. Marys River can be navigated almost as well by night as by day. They can be established at a cost not exceeding $30,000. The Board recommends that an appropriation of this amount be made therefor.

Congress provided the requested $30,000 for a system of lights and ranges along St. Marys River on March 3, 1891. An examination of the river was made in May and June of that year, and thirty-seven lights, which included range lights, crib lights, and more formal lights, were placed in operation during 1892. Permanent stations with a keepers dwelling were built at Winter Point, Round Island, Pilot Island, and Middle Lake George.

Nine-acre Round Island is located in the lower part of St. Marys River, just north of the much larger Lime Island and south of Munuscong Lake. A deed to a one-acre parcel on the eastern side of Round Island was obtained on May 5, 1892, and construction of Round Island Lighthouse began a few months later on July 27. The lighthouse consists of an eight-foot-square tower attached to the center of a frame, one-and-a-half-story keepers dwelling with a pitched roof. The tower stands forty feet tall and was originally accessed by a flight of wooden stairs from the upper floor of the dwelling.

The first floor of the keepers dwelling featured three rooms, plus a pantry, hall, and lamp room, while two rooms and closets were located on the upper floor. The lighthouse was painted yellow with white trim and was topped with a red roof. A lens lantern was used in the black lantern room to produce a fixed white light over an arc of 180° bounded on each side by 45° red sectors. The southerly red sector covered shoals southwest of the island, and the northerly sector helped mark the turning point into Munuscong (Mud) Lake. The light from Round Island Lighthouse was first exhibited on September 20, 1892. Due to delays in procuring lenses from abroad, the Lighthouse Board was forced to use U.S.-made lens lanterns in the river lights. The intention was to replace the lens lanterns with formal lenses if needed, but this must not have been necessary at Round Island as the lens lantern was still in place in 1909.

The station on Round Island was also equipped with a twelve by twenty-eight-foot boathouse, a wood frame oil house, a privy, and a barn. In 1903, a twelve-foot-square woodshed was added, and the boundaries of the reservation were marked with concrete monuments. A timber protection built along the river in front of the lighthouse was replaced in 1905 by a cement seawall that was thirty feet long and four feet high and had return ends.

The characteristic of the light was changed in 1922 to a white flash every two seconds. On June 30, 1923 the light was moved from the lantern atop the dwelling to a steel tower located at the inner end of the landing dock, sixty-five yards north of the lighthouse, and the station became unattended. The new light was an acetylene apparatus that required infrequent attention.

Around 1998, Paul Lindberg was boating around in search of a good duck hunting place in the lower portion of St. Marys River, when he happened upon Round Island. He immediately knew the place would make the perfect summer home for him and his wife Georgeann, a noted interior decorator. After identifying the owners of the lighthouse through tax records, Lindberg contacted them and worked out a deal to become just the third private owner of the lighthouse. The previous owners lived in Maine and had only set foot on the island once in the thirty years they had the lighthouse. Over the next three years, the Lindbergs renovated the lighthouse and built an addition to the west that contains a master bedroom and two bathrooms. A two-level deck added in front of the lighthouse is a prime viewing spot for river traffic.

As all the construction material and equipment had to be transported to the island on a pontoon boat, one of the first projects was building a boat slip. An experienced landscape contractor, Lindberg is responsible for the lighthouses new manicured setting. To help him relocate over 1,500 rocks around the property, he invented the Rock Jaw, which he now manufactures for sale.

An electric cable from the mainland provides power for the lighthouse and its new side-by-side refrigerator, which was the hardest object to transport to the island. Reverse osmosis is used to treat river water, and waste is processed by a sewage filtration system. The fully restored and strikingly beautiful Round Island Lighthouse was for sale in 2016 at an asking price of $1,995,000. The asking price had fallen to $1,495,000 by 2019, but it was back at $1,995,000 in 2021.

For a larger map of Round Island (St. Marys River) Lighthouse, click the lighthouse in the above map.

Round Island Lighthouse is best viewed from St. Marys River. I photographed the lighthouse on a river cruise occasionally offered by GLLKA.