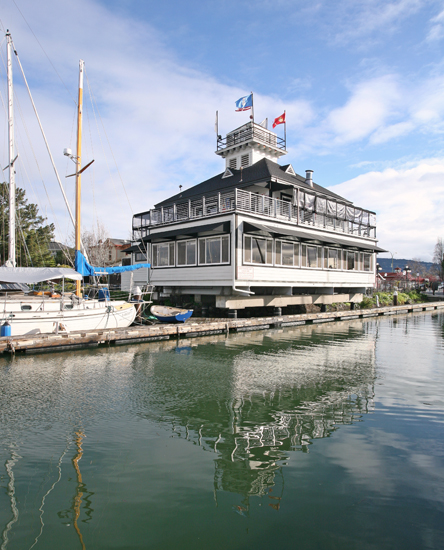 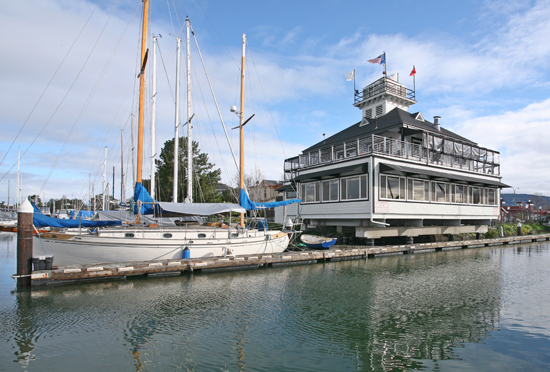 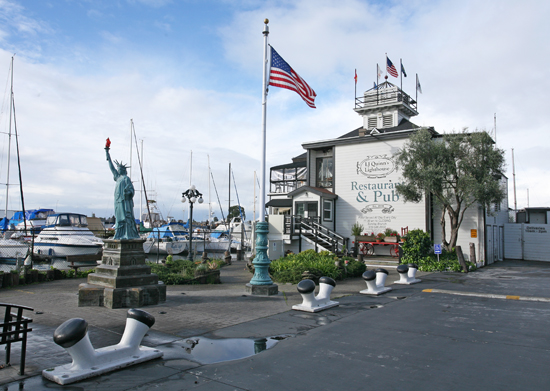 The arrival of the Central Pacific railroad terminus at Oakland in 1869 heightened the need for a nearby link to shipping in San Francisco Bay. Consequently, two piers that were spaced 750 feet and extended two miles out into the bay were built, and the area around them was dredged to form a shipping terminal. At the request of the Lighthouse Board, Congress provided $5,000 in 1879 for a small lighthouse and fog signal to be built at the end of the northern pier. After the U.S. Attorney General gave his assurance that the government had title to the proposed site, bids for the construction of the station were invited in 1889. Work commenced in September, and the government formally accepted the new lighthouse on November 30, 1889.

The original Oakland Harbor Lighthouse sat atop eleven wooden pilings, which had been driven into the bottom of the bay off the end of the northern pier, and was similar in style to several of the original California lights with a central tower that extended through the gabled roof of a rectangular, two-story dwelling. The lantern room housed a fifth-order Fresnel lens, and the station was activated on January 27, 1890. A 3,500-pound bell was mounted on a wooden walkway that encircled the dwelling and tolled once every five seconds when needed. The bell was located just ten feet from one of the keepers beds and would cause the whole lighthouse to shudder each time it was struck. Adjacent to the bell was a water tank for storing rainwater captured from the dwellings roof.

A red lens lantern was placed atop a platform on the north jetty, about a mile east of the lighthouse, to serve as a rear range light in 1890. This light was dispensed with in 1893, and a red light was instead displayed from a seven-foot-square structure set atop four piles just off the southern pier.

As the station was surrounded by open waters, the keepers had to rely on a small rowboat to obtain supplies and tend the light on the south pier. One morning in December 1890, the Southern Pacific Railroads 294-foot side-wheel paddle ferry Newark paid an unannounced visit to the station. Keeper Charles McCarthy and Assistant Hermann Engel were on duty, when Engels wife spied the ferry heading directly towards the station. The Newark smashed one of the lighthouses support piles and a platform brace, but nobody was hurt in the incident. The enraged captained yelled at the keepers while backing his vessel away, even though he was clearly at fault.

The concrete casings added in 1899 were clearly not enough to save the weakened lighthouse, as shown in this excerpt from a letter sent by the Secretary of the Treasury to the Speaker of the House of Representatives in March 1902:

This Department has the honor to state, at the instance of the Light-House Board, that a recent inspection of the light-house at the entrance to the jetties of Oakland Harbor, California, has developed the fact that its wooden pile foundation has deteriorated to such an extent as to render it liable to collapse at any time.

It is also found that the fog bell now in use at that light and fog-signal station is inadequate to meet the existing needs of navigation in that vicinity. The shipping interests of Oakland Harbor have reached large proportions in recent years, and the number of steamers, sailing vessels, ferryboats, and tugs passing in and out of the harbor is constantly increasing. Three ferryboats make regular trips during the night, and ought to have the service of an efficient fog-signal to aid their navigation.

Convinced of the need for a new lighthouse, Congress appropriated $19,000 on June 28, 1902, and this time, huge steel support cylinders with a diameter of four feet were placed around a trio of pine piles and then filled with concrete to thwart the marine borers. Work on the new lighthouse began in March 1903 and was finished just five months later. The second lighthouse was a nearly square, two-story structure built upon a steel-beam decking that rested on eleven support cylinders. The bottom floor of the lighthouse was used primarily for storage, while the upper floor was home to two keepers and their families. From each of the four walls, the roof sloped upward to a short square tower located at its center. The new lighthouse commenced operation on July 11, 1903, with a new 3,000-pound fog bell mounted on the second storys balcony.

After the completion of the new lighthouse, its predecessor was declared a navigational hazard and had to be removed. In February 1905, the old lighthouse was auctioned off, and the winning bidder was required to remove the entire structure, including the support pilings, within thirty days. The local press bemoaned the loss of the familiar lighthouse: For many years this has been the guide of the night ferries, and during storm and fair weather, fog and moonlight, it has shone steadily and lighted the deep-sea liner in and the crawling bay scow schooner by. The passing of the old light will be a source of regret to all lovers of the Bay, as it has grown into the affections of the constant user of it. This harbor light was the one to which the Oaklanders eye always turned on the night ferry, and its merry gleam lighted many a happy party on yachting back to port.

An armored cable was laid between the lighthouse and the nearby railway wharf in 1915 to provide a telephone link to the offices of the Twelfth Lighthouse District, and in 1918, an air diaphone, powered by an electric motor and compressor, was mounted atop the lighthouse to replace the stations fog bell.

As commerce in the area grew, the Western Pacific Railroads ferry slip was extended to encompass the lighthouse. This Coast Guard photograph shows the wooden lighthouse enclosed in the end of the pier. The pier extension simplified life for the keepers, as they could now reach the lighthouse by foot or car, rather than the stations rowboat. Transcontinental railroad connections were also now available for the keepers just a few steps from the door of the lighthouse.

Although the keepers lives were certainly simplified by the pier extension, their jobs were still demanding and even dangerous. On August 26, 1923, a stiff west wind caused a fishermans skiff to capsize just off the northern pier. Keeper Charles H.A. Brooke witnessed the mishap and quickly went to the rescue of the floundering fisherman. Brookes effort was later praised in the Lighthouse Service Bulletin.

Myron Edgington was in charge of Oakland Harbor Lighthouse in the 1950s. By this time, the Coast Guard had taken control of the countrys lighthouses so Edgingtons assistants were two coastguardsmen. Edgington had served in the Navy and at Mile Rocks and Point Vicente Lighthouses before accepting a transfer to Oakland. In his spare time, Edgington practiced the old seafaring craft of macramé, making beautiful mats and tablecloths for the station. Keeper Edgington and his two assistants received their chance to perform a rescue operation when two Navy fliers, likely from nearby Naval Air Station Alameda, plunged into the water near the lighthouse.

In 1966, an automatic beacon was installed at the end of the pier, and the lighthouse was deactivated. Shortly thereafter, the lantern room was shipped to Santa Cruz where it was installed on the recently constructed Mark Abbott Memorial Lighthouse. Oakland Harbor Lighthouse was eventually sold to a restaurant firm for $1, but the new owners then had to spend $22,144 to have the Murphy-Pacific Corporation transport the edifice six miles south along the Oakland estuary to its current home at Embarcadero Cove, where it was converted into Quinns Lighthouse Restaurant and Pub. The restaurant has been open since 1984 and features contemporary American cuisine.

For a larger map of Oakland Harbor Lighthouse, click the lighthouse in the above map.

The lighthouse is owned by Quinn's Lighthouse Restaurant and Pub. Grounds and dwelling open, tower closed.