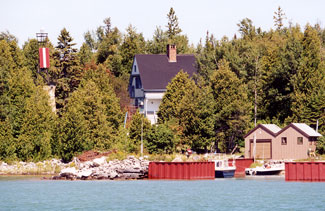 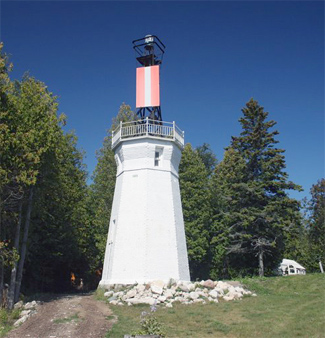 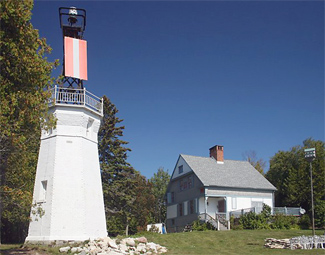 Pipe Island, also known as Round Island on account of its shape, is located four miles above the mouth of St. Marys River and at the north end of DeTour Passage. After a petition had been received for a lighthouse on Pipe Island, Congress appropriated $10,000 for its construction on March 3, 1885, and a deed to the island was finalized on November 2, 1885, following much trouble and delay.

A contract for building the tower, keepers dwelling, and boathouse with a deadline of five months from July 11, 1887 was awarded along with a separate contract that required the metalwork for the station to be supplied by August 13, 1887. An octagonal tower was built of buff brick atop a cut-limestone foundation on the southern side of the island and capped by an octagonal cast-iron lantern room. This lighthouse measured thirty-two-and-a-half feet tall and tapered from a diameter of fourteen feet at its base to ten feet at its top. A spiral, cast-iron stairway lead to the lantern room, where a fifth-order, Henry-Lepaute Fresnel lens produced a fixed red light at a focal plane of thirty-seven-and-a-half feet.

A two-story, frame keepers dwelling was built fifty feet northeast of the lighthouse on a stone foundation. The residence featured four rooms and a kitchen lean-to on the first floor, three rooms on the second floor, and a cellar and attic. The dwelling was painted white with lead trim and was topped by a red, metal slate roof. An outhouse was provided for the keeper and his family, and the stations water was taken from the river. The stations boat, used to reach DeTour Village, two miles away, was stored in a twelve-by-thirty-foot, wooden boathouse.

The 1888 Annual Report of the Lighthouse Board provides the following details on the completion of the station:

The work of erecting the buildings of this station, grading the grounds, and laying sidewalks was completed on December 8, 1887. The illuminating apparatus was delivered and set up on the opening of navigation, and the station was lighted on the night of May 12, 1888.

Pipe Island Light marked an important turning point in Saint Marys River, and it could also be aligned with Frying Pan Light, two miles away near the mouth of the river, to form a range for entering and leaving DeTour Passage.

During the spring of 1890, wooden cribs, built of one-foot-thick cedar logs and railroad ties and filled with stone gathered from the island, were used to improve the stations boat landing. Thirty-two feet of cribwork was added on the north side and forty-eight feet on the south side, with a crib in front, running north and south, to serve as a mooring place for the keepers boat.

In 1891, the lighthouse tender Warrington delivered a circular, iron oil house with a capacity of 225 gallons to the island. The brick lighthouse tower was originally painted red with a black lantern, but in 1895 the red portion was painted white to render it more efficient as a day range with Frying Pan Island light-house.

After having served just a few miles downstream at Frying Pan Lighthouse for nine years, Frank Bernard transferred to Pipe Island Lighthouse in 1891 and served until passing away at the station on August 25, 1910 at the age of sixty-eight. For a while following Keeper Bernards death, captains passing the lighthouse would blow their horns to show their respect for the keeper. John H. Malone, who had been serving at Menagerie Island Lighthouse in Lake Superior for thirty-two years, relocated to Pipe Island to replace Frank Bernard.

In the early morning of May 14, 1917, two steamers collided head-on in a dense fog near Pipe Island and sank in forty feet of water. The 414-foot-long Pentecost Mitchell was downbound loaded with ore, and the 416-foot-long Saxona was headed upriver full of coal. All crewmembers escaped without injury. The Lighthouse Bureau placed two spar buoys with red lights to mark an alternate channel on the other side of Pipe Island, while the owners of the steamers marked the wrecks with lights. Both steamers were raised, repaired, and returned to service.

The focal plane of Pipe Island Light was increased to fifty-two feet on October 21, 1920 by removing the lantern room and displaying a light from a fifteen-foot skeleton tower mounted atop the brick lighthouse. The light was changed to fixed white at this time, but on November 17, the light was returned to its previous characteristic of fixed red.

Norman P. Hawkins looked after Pipe Island Light for nearly twenty years until his death on April 16, 1937. His death certificate states that he died of suicide as the result of shock and injury to nerve centers, following a gunshot wound of left side of face. The Hawkins family had suffered another tragedy just four years earlier, when Norman Hawkins, Jr. was killed in a hunting accident. Eighteen-year-old Norman was hunting in the woods near Detour when his friend mistook him for a deer and shot him through the neck.

Norman P. Hawkins began his lightkeeping career in 1904 as an assistant keeper at Outer Island Lighthouse in Wisconsin and served at Sand Island Lighthouse, also in Wisconsin, and then two stints at both Crisp Point Lighthouse and DeTour Reef Lighthouse before being placed in charge of Pipe Island Lighthouse in 1919 or 1920. In addition to being a keeper, Hawkins was a photographer and had a studio behind the familys residence in Detour. His pictures of passing boats and wildlife could be found on display around Detour for many years. Hawkins also enjoyed taxidermy and mounted several small animals and birds.

Norman and his wife Mary had eight children, and the family would spend the summers together on Pipe Island where they lived without electricity and running water. Jeanette Hawkins Pearce was one of these eight children, and she enjoyed fishing, boating, and swimming during her summers at Pipe Island. The Coast Guard presented a certificate to Jeanette when she was in her nineties that acknowledged the isolation and hardships she endured during her fathers service. As keeper of the Detour and Pipe Island lighthouses, his chosen profession introduced unique challenges to you and the rest of your family, the certificate reads. In overcoming those challenges, you positively contributed to the effective management of the lighthouses. Your understanding was essential to your fathers success and to the safety of mariners on the St. Marys River.

In 1937, Pipe Island Light was changed from a fixed red acetylene light to an electric light that produced two red flashes every five seconds. After this change, the light was listed as unwatched.

After assuming control of the countrys lighthouses in 1939, the Coast Guard had a presence on the island, as evidenced by the following incident: On June 23, 1954, coastguardsmen from Pipe Island recovered the body of Captain Lloyd Smith who had fallen from the freighter James E. Ferris and been missing since May 31.

The government sold thirteen-ace Pipe Island at some point, and a private owner later donated the island to The Nature Conservancy as a tradeland. Under the tradeland agreement, the island was sold by the conservancy to raise funds for the non-profit, but not before a conservation easement was put in place that prohibits further development of the island. John and Mary Kostecki purchased the island in 2002 and operated it as a vacation resort with three rental cottages for a few years, but the island was back on the market in 2006 with an asking price of $2.2 million.

For a larger map of Pipe Island Lighthouse, click the lighthouse in the above map.

Pipe Island Lighthouse is best seen from the water, but a distant view is possible by taking Sims Street north along the shoreline from De Tour Village.