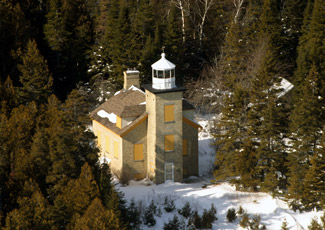 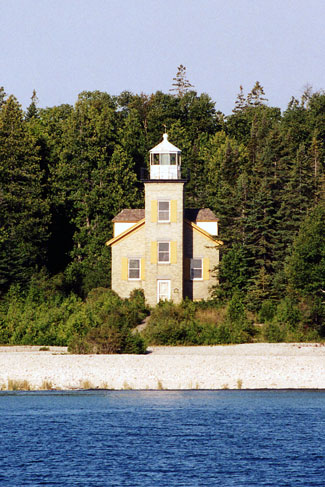 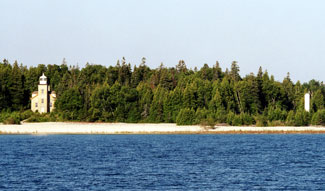 Located along the eastern approach to the Straits of Makinac, twelve-mile-long and six-mile-wide Bois Blanc Island was ceded to the United States on August 3, 1795 by Chippewa chief Matchekewis as part of the Treaty of Greenville. Bois Blanc is French for white wood, and likely refers to the islands stands of basswood tree whose white underbark was used by Native Americans and French fur traders as cordage for sewing up canoes and making webbing for snowshoes.

On May 23, 1828, Congress appropriated $5,000 for a lighthouse on Bois Blanc Island, and on March 9 of the following year, a $4,695 contract was awarded to Philo Scovill of Cleveland for building a light-house and dwelling-house on the island and fitting up the light-house with patent lamps, reflectors, &c. The outer end of a peninsula extending from the northern side of Bois Blanc Island was selected as the site for the lighthouse, which would serve as a guide for mariners sailing through the Straits of Mackinac.

A circular stone sixty-five-foot-tall tower and a detached dwelling were completed in 1829, and Keeper Eber Ward placed Bois Blanc Lighthouse, the second U.S. lighthouse to be built on Lake Huron, into service in the spring of 1830. Stephen Pleasonton, who was in charge of the nations lighthouses, described the early years of Bois Blanc Lighthouse in an 1842 report:

This light-house, when located, was considered perfectly secure, but the extraordinary rise of the waters of the lake, in 1836 and 1837, brought the water to its base; and in 1837, for the first time, Mr. Wendell, the superintendent, informed me it was in danger. He was immediately directed to protect it either by a wall or a wharf in front; but before anything could be done in this respect, a storm arose, in December, 1837, and, forcing the water upon the base of the light-house, it was undermined and fell.

Keeper Ward was absent from the island when the lighthouse toppled over, having been detained on Mackinac Island by bad weather, but Emily, his daughter, witnessed the event. The following is Emilys account of that day as recorded in the book Grandmothers Stories:

Early in the forenoon I had seen that the water surrounded the building, and later on, as the storm increased in violence, every great wave would dash itself to foam against its brawny sides.

About five oclock I saw that if I was to save the lamps and the great reflectors I must begin at once. So putting a warm hood on my head to protect it from the rain, I started, first telling Bolivar not to stir from the house, but to stand at the window and watch for me. The poor child burst into tears and begged me not to go, but I thought it was my duty to save the government property.

I had no sooner got out of the house than the wind, with a sudden dash, nearly took me off my feet, the rain half blinded me, and the spray wet me through; but I ran quickly, and in a moment was in the light-house, climbing its hundred and fifty steep steps with all the speed I could. It took all my strength to carry those great lamps and reflectors down the winding stairs; and sometimes when I would stop to take breath, and would hear the beat of the waters and feel the shock it gave the tower, it would give me a momentary spasm of terror; but it would be but momentary, for my work must be done, and I had no time for fear.

I think I climbed those stairs five times before I got everything movable down, and each time Bolivar would implore me, with tears streaming from his eyes, not to go again,  that I would surely be killed.

After I had got everything down I changed my wet clothes for dry ones, and we ate our supper, and then took our places by the window to watch for the light-house to fall. Suddenly we saw a long zigzag line run from the towers base to its top. I said to Bolivar, Put on your overcoat and hat, and I put on my warm shawl and hood. Still we stood by the window; another line shot up and around, and the tower tottered.

Now, said I, Bolivar, come! He took my hand, and we went out the back way, shutting the doors behind us, and ran for the woods, a few rods off. We had scarcely got there when, with one mighty crash, down went the huge pile of masonry, and the waves washed over the place where the light-house once stood.

We could see that the house had not been injured; so with thankful hearts we went back, and Bolivar was soon in bed and asleep.

On July 7, 1838, Congress allocated $5,000 for rebuilding the lighthouse on Bois Blanc Island, if a suitable sitecan be found on said island. The second lighthouse, built farther from the lake, consisted of a thirty-five-foot stone tower, which tapered from a diameter of eleven feet, five inches, to five feet, ten inches. Stone steps led up the tower to the lantern room, where an array of nine lamps, set in fourteen-inch reflectors, produced a fixed white light. In 1857, a fourth-order Fresnel lens was installed in the lantern room.

The lighthouse was built on a site some rods farther from the lake than the former site, and on much higher ground. This was surely true, as the second tower had a focal plane of 112 feet above the lake. A new stone keepers dwelling, measuring thirty-four by twenty feet, was built for Keeper Ward.

In 1833, before the collapse of the first lighthouse, Eber Brock (E.B.) Ward left his father on Bois Blanc Island to work for his uncle Samuel Ward, who had a shipbuilding business in Newport, Michigan. The timing was perfect for E.B. as steamship travel was expanding rapidly. With hard work and wise investments, E.B. Ward became a wealthy and powerful man and was able to secure his fathers transfer to Fort Gratiot Lighthouse in 1843. When his uncle passed away in 1855, E.B. received a sizable inheritance, which, coupled with his own fortunes made in shipping and the lumber industry, was sufficient to make him Detroits first millionaire.

While Stephen Pleasonton saw to it that lighthouses were built in a very economical manner, the resulting structures didnt always last. An 1866 report noted that Bois Blanc Lighthouse was of a defective style and pattern and in a very dilapidated condition. The Lighthouse Board requested $14,000 for a new lighthouse, and this amount was granted by Congress on March 2, 1867.

Work on the third Bois Blanc Lighthouse, the one that remains standing today, began on July 1, 1867 and wrapped up later that year. Unlike its predecessors which had a detached tower, the 1867 lighthouse consisted of a yellow-brick, one-and-a-half-story dwelling with a square tower attached to its lakeward end.

In 1884, the stations boathouse was moved to a more sheltered location on the south side of the island, where a new landing dock was built. A brick cistern was placed in the dwellings cellar in 1891, and the lighthouses downspouts were extended to it. A well was also sunk in 1891 near the beach east of the lighthouse and equipped with a pump and rubber house to augment the dwellings water supply and to provide fire protection.

On April 20, 1922, Keeper Metivier was returning to Bois Blanc Island on the first trip of the season for the wooden passenger steamer Colonial, when the vessel became jammed in ice floes and started drifting down Lake Huron, leaking badly. A Coast Guard crew rescued all aboard the steamer and transported them to Bois Blanc Island, leaving the steamer to be claimed by the lake.

No longer needed, Bois Blanc Lighthouse was sold to Earl J. Coffey on August 24, 1925. The Jahn family purchased the lighthouse after it had been allowed to fall into disrepair and have returned the dwelling to a livable condition.

Located at the end of a long peninsula, jutting into Lake Huron from the northern side of Bois Blanc Island.
Latitude: 45.8111, Longitude: -84.4208

For a larger map of Bois Blanc Island Lighthouse, click the lighthouse in the above map.

Being privately owned, Bois Blanc Lighthouse is best viewed from the water. You can see the lighthouse on eastbound lighthouse cruises offered by Shepler's. Seasonal ferry service to Bois Blanc Island is available.