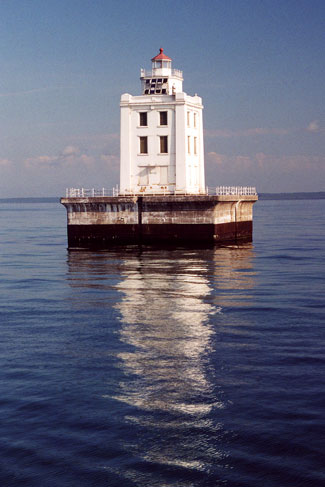 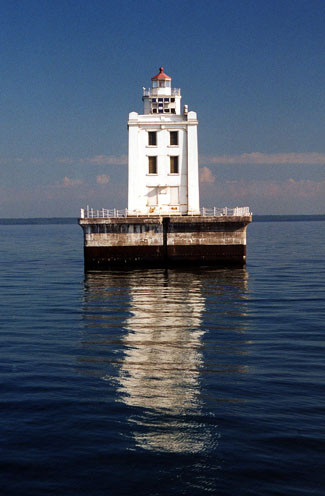 Lying near the track of vessels sailing between Detour Passage and Mackinac Island, Martin Reef is a rocky shoal that has patches with a covering of as little as three feet of water. The steamer Muskegon, which ran aground on the shoal with a load of lumber in November 1908, was one of many vessels that was snagged by the reef before it was properly marked. A gas buoy was placed on the dangerous hazard until Lightship 89 was anchored five-eighths of a mile south of Martin Reef on the opening of navigation in 1909. Built at Muskegon, Michigan by the Racine-Truscott-Shell Lake Boat Company in 1908, the steel-hulled lightship displayed a fixed white light from a cluster of three oil lens lanterns raised to a height of thirty-five feet, and during periods of low visibility, it sounded a six-inch steam fog whistle to keep mariners away from the reef. On April 22, 1915, a submarine bell, which was struck three rapid blows every fifteen seconds, was installed on the lightship.

In 1923, the Lighthouse Service requested $100,000 for establishing a permanent lighthouse on Martin Reef, using the following Note as justification for the expense:

A first-class light and fog-signal maintained in a fixed structure on the shoal would be a better guide for vessels, and the annual cost of maintenance would be about $4,450 less than the lightship now costs. With the construction of a station as is proposed, once authorized and then provided for, light vessel No. 89 now at Martin Reef could be at once released for assignment elsewhere and the relief light vessel placed on her station temporarily during the new construction. This would avoid the necessity for building a new lightship, at a cost of about $200,000, to replace lightship No. 56, which is in such condition that it must be replaced within two years. Thus, for an expenditure of $100,000, the shoal can be better marked, there will be a saving of about $100,000 over the cost of a new vessel for the Lakes, and also an annual fixed saving of about $4,450. The matter is an urgent one from the standpoint of economy.

Allotments of $16,000 and $34,000 made respectively on December 31, 1924 and March 19, 1925 allowed work to begin on the lighthouse during the 1925 season. A work site was established on Government Island just off Cedarville, and a timber crib for the lighthouses foundation was built there using twelve-by-twelve-inch timbers and fitted with a seven-foot-wide belt of one-half-inch-thick steel ice plating. Late in the summer of 1925, the crib was hauled out to the reef, sunk, and its pockets were filled with rocks and cement.

Additional allotments of $10,000 in December 1925 and $40,000 in May 1926 allowed work to continue the next season. During the summer of 1926, the crib was topped with a concrete pier, and the work camp was then moved from Government Island to the lighthouse pier, giving workers ready access to the site.

The following description of the lighthouse was published by the Lake Carriers Association in 1927:

The structure stands in about six feet of water and is founded on hardpan and boulders. The foundation is of concrete, 60 feet square, that portion below water being placed inside of a timber crib. Heavy ice plating of steel protects the structure at the water line and an overhang at the deck line, 18 feet above the water, serves to keep the seas from boarding the pier. Vaulted rooms inside of the pier above water, provide storage for coal, oil, and miscellaneous supplies, also space for storage batteries, heating plant, water pumping system, etc. The structure proper is rectangular and is of steel throughout with back-up walls and partitions of masonry. Ample accommodations are provided for three or four keepers in the second and third stories. The first story houses the fog signal machinery, electric generating equipment, air pressure tanks, etc. The main body of the structure is surmounted by a steel-encased watchroom on top of which is a 4th-order lens lantern.

The fog signal is a type F diaphone operated by compressed air and the light is electric, giving a candlepower through a 4th-order lens of about 8,000 candlepower. The structure and equipment are thoroughly modern throughout and all work has been planned with a view to durability. Total allotments for the building of this structure amounted to $112,000, which represents the approximate cost. Work was started early in 1925 and the station was placed in commission upon the opening of navigation of 1927.

Wallis G. Cogswell was serving on Martin Reef Lighthouse in early April 1954 when he fell down a flight of stairs and injured his back. A helicopter stationed on the icebreaker Mackinaw was dispatched to the lighthouse, where it hovered about twenty-five feet above the lantern deck while a web sling was lowered to retrieve Cogswell. Once on board the Mackinaw, Cogswell was taken to Cheboygan where he was treated at Community Hospital.

On May 1, 2013, the General Services Administration announced that Martin Reef Lighthouse was excess to the needs of the Coast Guard and was being made available at no cost to eligible entities defined as federal agencies, state and local agencies, non-profit corporations, educational agencies, or community development organizations, for education, park, recreation, cultural, or historic preservation purposes. Interested entities were given sixty days to submit a letter of interest. After no qualified steward was found, the General Services Administration initiated an online auction for the lighthouse on July 2, 2018 with a starting bid of $25,000. Six bidders particiapted in the auction, which ended on October 1, 2018 with a high bid of $52,777.

For a larger map of Martin Reef Lighthouse, click the lighthouse in the above map.

Martin Reef Lighthouse is best viewed from a boat. A very distant view is possible from Highway 134, 6.5 miles east of Port Dolomite. The lighthouse can be seen on Les Cheneaux Lighthouse Experience offered by Shepler's. A fourth-order Fresnel lens used at the lighthouse is on display at Point Iroquois Lighthouse.