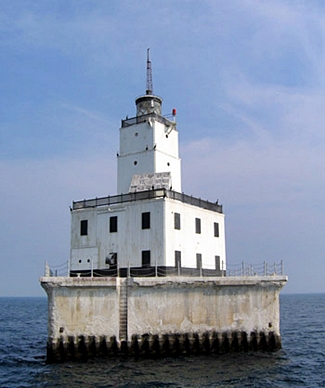 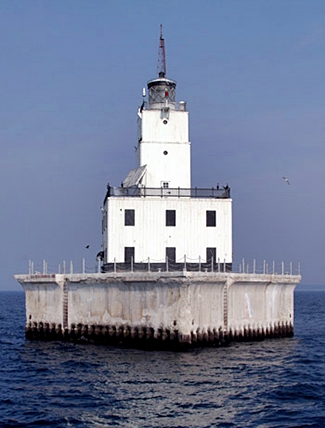 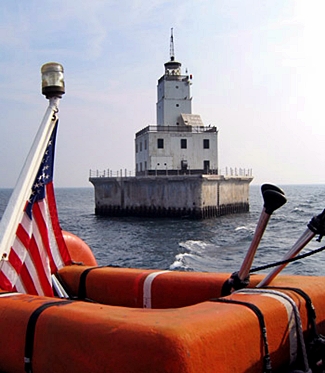 In 1892, the Lighthouse Board noted that there were three different passages linking Green Bay and the Straits of Mackinac: As the passage mariners used depended on weather conditions, it was imperative that each be well lighted. To better mark the third passage, the Lighthouse Board requested $20,000 for a light and fog signal on the north end of North Manitou Island.

Congress authorized the desired amount on March 2, 1895, and work on the island began in August 1896. While the initial request by the Lighthouse Board called for the station to be built on the northern end of the island, it was built on the islands southeast point, known as Dimmicks Point, so it could also guider mariners between the island and the mainland. The fog signal building was finished in October, allowing for the boilers and machinery to be installed therein and placed in operation on November 20, 1896. The brick keepers dwelling was completed in November, and by the following month the stations fences, sidewalks, and oil house were in place, completing the contract.

A metal light tower had been planned for the station, but instead, in July 1898, four brick piers were placed on a leveled site to support a pyramidal, wooden tower topped by a fourth-order lantern. North Manitou Island Light, an alternating red and white flash seen every ten seconds, was placed in operation on September 15, 1898 at a focal plane of seventy feet above the lake. The fourth-order, L. Sautter and Cie. Fresnel lens used in the tower had six bulls-eye panels, with a vertical red screen secured in front of alternate panels.

The months of May and June were called the fog months by lighthouse keepers and rightly so, because the water was still very cold from snow and ice and the sun was getting warmer each day. This condition created fog. I remember one spring when the fog signal never stopped sounding for more than twenty days.

I think the interesting part for me was to listen to the various sounds and try to picture what was happening out there in the fog. I would listen for the lightship and South Manitou whistles and all the various whistles of the vessels using the Manitou Passage. There was the deep-throated whistles of the large steamers as they sounded the required three short blasts, the lighter toned whistles of others, and the sound of a motorboat engine. They also periodically would sound three blasts on their hand held mouth-operated horns. Occasionally you could hear a siren and bells ringing that indicated that there was a vessel out there towing barges. Once in a while, out of the main channel area, you could hear a ship ringing a bell rapidly every minute or so to indicate that the captain got tired of that mess and had pulled over to anchor and rest awhile.

The lightship that Glenn could hear was North Manitou Shoal Lightship, that was anchored two miles off Dimmicks Point. In 1909, the Lighthouse Board noted that a shoal had developed southeast of Manitou Island in recent years and requested a lightship be placed on the easterly end of the shoal to help mark the six-mile-wide channel between Dimmicks Point and Pyramid Point on the mainland. When White Shoal Lighthouse was finished in 1910, the lightship formerly used there was transferred to North Manitou Shoal. Three lightships served on the station: LV-56 from 1910 to 1926, LV-89 from 1927 to 1933, and LV-103/WAL-526 from 1934 to 1935. Of the three lightships, only LV-103 survives, and it can be toured in Port Huron, Michigan, where it is dry docked.

As the lightship was often compelled by ice conditions to be off its station in the early spring and late fall, in 1923 the Lighthouse Service proposed replacing the lightship by a fixed station on a crib that would allow the fog signal on North Manitou Island to be discontinued and the light there to be made an unattended acetylene light.

Funds for construction of North Manitou Shoal Lighthouse were provided by the Public Works Administration, and construction started early in the fall of 1933. The following description of the structure, which commenced operation in 1935, was published by the Lighthouse Service:

This light station replaces the North Manitou Lightship No. 103 and North Manitou Island Light Station, and serves as an improved mark for the outer end of the shoal projecting southerly from the south end of North Manitou Islands. A substantial saving in annual maintenance cost will be effected. The crib on which the structure is built stands in 22 feet of water, on a hard sand and coarse stone bottom. The crib is 65 feet square by 22 feet deep, and is filled with conveyor stone. The voids around the stone in the 20 outer pockets were pumped full of Portland cement grout. Arch web steel sheet piling driven 24 feet into lake bottom encloses and protects the crib.

The crib supports a hollow pier of reinforced concrete 62 feet square and 20 feet above water, with deck overhanging 2 feet on all sides. This hollow space is occupied by the steam heating plant, coal and oil storage, laundry, etc. Above the pier rises the steel building 37 feet square, two stories high, surmounted by a square tower of three stories additional height. On the top of the tower is a third-order lantern, with its focal plane 79 feet above water. The building and tower are constructed of steel channels 12 and 15 inches wide, standing vertically with flanges turned in and bolted together on the inside. Exterior walls of building and the roof are insulated with rock wool and lined with Portland cement plaster on metal lath.

The illuminating apparatus is a four-panel, 36-inch diameter revolving lens, fitted with a 1,000-watt electric lamp producing a flashing red light of 240,000 candlepower. Current is supplied from 4-kilowatt Diesel engine-generators with storage batteries. An unattended winter light operated by acetylene gas is provided for use during the close season.

Two diaphragm horns, one facing up and one facing down the channel, sound, simultaneously, a characteristic of one blast every 20 seconds, of 2 seconds duration. The radiobeacon is synchronized with the sound signal for distance-finding purposes.

The first story of the steel building provides a boat room and power room. In the second story is a large living and watch room, one end of which is occupied by kitchen equipment. The radio transmitter occupies the other end. Four bedrooms are also located on the second floor. The quarters are equipped with electric lights and modern plumbing facilities. The station was constructed at a total cost of $152,186.

After an automatic blinker light was installed atop North Manitou Island Lighthouse in September 1932 and the stations steam fog signal was discontinued, the resident keepers were soon transferred elsewhere. William R. Angell, who would later become president of Continental Motors, joined two Chicago businessmen to form Manitou Island Syndicate, which started buying up land on North Manitou Island. Angell later bought out the other members of the syndicate and renamed it the Manitou Island Association. In 1938, Angell purchased the North Manitou Island Lighthouse property at auction and added it to his island land holdings, which were being used as a deer hunting preserve. The wooden tower, fog signal building, and keepers dwelling were neglected and eventually lost to erosion. The lighthouse crashed to the ground in October 1942, after being undermined by the lake.

Known locally as The Crib, North Manitou Shoal Lighthouse was typically manned by a three-person crew, each of whom served two weeks at the station followed by a week off. To pass time, the men watched television, read books and magazines, played board games, and chatted with passing ship captains by radio. One coastguardsman perfected his rappelling skills by using ropes to descend from the gallery outside the lantern room to the concrete deck below. When the station was automated in 1980, it was one of just a handful of staffed lights in the Great Lakes and the last offshore light to lose its crews. The unique four-sided lens formerly used in The Crib is on display in Glen Haven at the Cannery Boat Museum, part of Sleeping Bear Dunes National Lakeshore.

In December 2000, concerned citizens from Glen Arbor, Maple City, and Walled Lake, Michigan, met to form North Manitou Shoal Light Preservation Society (NMSLPS), a nonprofit organization whose goal was to promote the preservation and restoration of North Manitou Shoal Lighthouse. After determining that the dollar amount for restoring the lighthouse to an acceptable standard would be considerable, the group abandoned its effort.

In May 2015, North Manitou Shoal Lighthouse was declared excess to the needs of the United States Coast Guard and made available to eligible organizations under the provisions of the National Historic Lighthouse Preservation Act of 2000. Qualified entities were given sixty days to submit a letter of interest and were required to obtain a conveyance from the State of Michigan for the bottomlands on which the lighthouse stands. When a new custodian was not found, the General Services Administration initiated an online auction for the lighthouse on July 15, 2016 with an opening bid of $25,000. Four bidders participated in the auction, which ended on September 27, 2016 with a high bid of $73,000. The winner of the auction was later identified as North Manitou Light Keepers, Inc., which lists Daniel Oginsky as its resident agent and president.

North Manitou Light Keepers spent roughly two million dollars to rehabilitate the lighthouse and managed to open the restored structure for the first public tour on June 19, 2021, two weeks before their goal of July 4, 2021. Jake Kaberle, one of the Keepers, which has members in several Michigan cities, said, We all have young families and we're all looking for our future and to leave a legacy behind. We all thought this is something that our children will really look at and say wow, these guys did something.

Located in the water roughly midway between the southern end of North Manitou Island and the mainland.
Latitude: 45.02091, Longitude: -85.95706

For a larger map of North Manitou Shoal Lighthouse, click the lighthouse in the above map.

The lighthouse is privately owned. Tower open during tours.