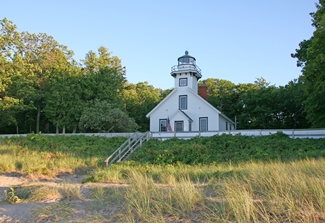 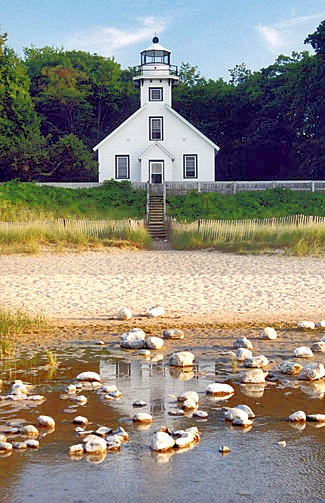 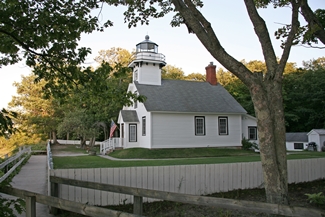 Nineteen-mile-long Old Mission Peninsula, which divides Grand Traverse Bay into a west arm and an east arm, was first settled by Peter Doughtery, a Presbyterian minister sent by the Presbyterian Board of Missions to establish a church and school for Native Americans. Doughtery originally selected Elk Rapids for the site of his mission, but in 1842, at the behest of Chief Ahgosa of Grand Traverse Band of Ottawa and Chippewa Indians, Doughtery relocated to the harbor near the northern tip of the peninsula. Ten years later, Doughtery moved across Grand Traverse Bay to Omena, on the Leelanau Peninsula, where he established a New Mission, and the former site was known forever after as Old Mission. Still standing, Doughterys 1842 residence at Old Mission is now run by the Peter Dougherty Society. With its weather moderated by the surrounding waters, Old Mission Peninsula rarely has frost during the growing season, making it an ideal agricultural area. Dougherty planted the first cherry tree on the peninsula in 1852, and cherry farming eventually surpassed the lumber industry as the main source of income for inhabitants of the peninsula. Today, the peninsula is known for its wineries, several of which are open to the public.

In October 1863, a committee, assigned by the Lighthouse Board to visit potential sites for lighthouses along the Great Lakes and in New England, recommended that a lighthouse be built at the tip of Old Mission Peninsula to guide maritime traffic in Grand Traverse Bay. The following report from the committee appeared in the Annual Report of the Lighthouse Board:

It appears from the notes of Colonel Graham, furnished to this committee, that there is an extensive trade in the two arms of this bay, the coasts and back country of which are quite thickly settled. At the heads of both these arms there are excellent harbors and good anchorage, and vessels should be aided in reaching them. At their very heads at least three fathoms of water are found, and below from four to twenty fathoms.

The trade in both now consists of lumber, amounting to about eighteen millions of feet, of 10,000 cords of wood, of $100,000 worth of furs, and $50,000 worth of agricultural products, per annum, altogether about $378,000 per annum. Traverse City, situated at the head of the west arm, is the terminus of an extensive railroad, which will probably be completed within two years.

Congress had appropriated $6,000 for a lighthouse at the northern tip of the peninsula on March 3, 1859, but a decade later, land for the structure still had not be purchased due, in part, to the intervening Civil War. In 1868, the Lighthouse Board noted: The necessity for the construction of the light-house never having been at all urgent, the money has not been expended. Further examination into the matter will be made, and if it does not appear that the station is required the appropriation will be transferred to the surplus fund.

The examination into the matter must have determined that the lighthouse was needed, as land for it was purchased in 1869. Construction was carried out during 1870, and the lighthouse was lit for the first time on September 10 of that year by Jerome M. Pratt, who had previously served as keeper of Skillagalee Lighthouse. On the first page of the journal Keeper Pratt kept during his six years at Mission Point, he wrote, This journal was delivered 15th August, 1870, to J.M. Pratt first light-keeper of Mission Point lighthouse. Each day, Pratt meticulously recorded the weather, wind direction, and the number of ships passing the point. Over the years of his service, it is easy to see the rise in steamships. In October 1870, sixty-nine sailing ships were noted passing the lighthouse along with fifty-one steamers, but five years later, things had reversed, as there were 101 steamers and seventy-five sailing craft. Only once did Keeper Pratt record anything except official station business. This was on October 8, 1876, when the following cryptic note was made in the left margin of page twenty-one: Eddie Died: 7:00 p.m. Eddie was the adopted infant son of Jerome and Araminta Pratt.

Keeper Pratt was removed from office in 1877, reportedly for political reasons, and replaced by seventy-one-year-old John M. McHarry. Four years later, Keeper McHarry drowned after jumping over the side of the steamer City of Traverse on August 1, 1881. John Lane, the lights third keeper, had lost both of his parents by the time he was fourteen, and subsequently served on a whaling ship and as captain of a Great Lakes steamer before entering the Lighthouse Service. Keeper Lane passed away on December 12, 1906, and Sarah, his wife, looked after the light until the following March, making her the only female keeper of the light. Though Sarah was the official keeper for just a short period, for at least eight years preceding her husbands passing, she had total charge of the tower and light due to her husband's failing health. While Sarah minded the light, John looked after the books.

Mission Point Lighthouse consists of a one-and-a-half-story frame dwelling, measuring thirty by twenty-eight feet, with a square tower protruding from its lakeward gable. The center of the lantern room is thirty-five feet above the ground, but the bluff on which the lighthouse stands gave the fixed white light, produced by the towers fifth-order Fresnel lens, a focal plane of forty-eight feet above the bay.

Over the years, a few additions were made to the lighthouse. In 1889, a 200-foot-long and 4-foot-high crib was built and filled with stone to protect the shore in front of the lighthouse. That same year, a brick cistern was built, and a pump was placed in the kitchen to draw the water. A new woodshed was put up in 1894, and in 1898, a brick oil house was added to store the volatile kerosene, which was being used as the illuminant at that time.

In 1911, a bell buoy, painted with red and black horizontal stripes, was established off Mission Point to mark the northern end of the shoals that extend from the peninsula. Though its importance had been reduced, Mission Point Lighthouse continued to be staffed until June 30, 1933, when Emil C. Johnson, its last keeper, left. An automated acetylene light was installed in the lantern room and continued to server mariners.

In 1938, the offshore bell buoy, which by then was lit, was replaced by a new structure known as Mission Point Light. This modern light took over the function of Mission Point Lighthouse, which was deactivated. The following description of the new navigational aid was given in the Annual Report of the Lake Carriers Association:

Mission Point Light was established in 19 feet on the shoal spot previously marked by Mission Point Lighted Bell Buoy 1. The structure is a circular black cylinder of interlocking steel sheet piling filled with stone and capped with concrete. On the pier thus provided is erected a skeleton steel tower and small steel house elevated above the pier deck on four circular cylinders for protection from ice and wave action. The light is a 200 m.m. lantern fitted with a battery operated electric light showing a white flash of 330 c.p., 1 second duration every 10 seconds.

The steel skeletal tower atop the circular pier has since been replaced by a cylindrical tower.

Mission Point Lighthouse Reservation originally consisted of 142 acres, but in March 1931, all but 5.38 acres of it were transferred to the State of Michigan for public park purposes. The remaining piece of the reservation, which included the lighthouse, was declared surplus on September 24, 1938. Residents of Peninsula Township collected funds and purchased the lighthouse and remaining piece of the reservation for $1,001 in 1948. Forty-three people, now known as the founding families, donated an average of forty-five dollars to raise the needed money. The acquired property was incorporated into the surrounding park, all of which is now owned by the township.

Between 1933 and 1948, vandals removed the Fresnel lens and a beautiful hand-carved mahogany railing from the lighthouse. After the township acquired the property, Ed Andrus took up residence in the lighthouse and worked on restoring the structure. By 1955, the stations shed was being used as a refreshment stand.

In 2011, a fifth-order Fresnel lens, the same size of lens that was used at Mission Point, was loaned to the lighthouse by the Coast Guard. The lens was formerly used near Milwaukee and had been in storage at Sleeping Bear National Lakeshore.

As part of projects to celebrate the 150th birthday of the lighthouse in 2020, fifteen sets of new green shutters, which had been missing from the windows for ninety years, were installed, a new white fence was erected around the lighthouse, and two windows and a door were returned to the south and west sides of the lighthouse for historic integrity.

Located in Peninsula Township Park, at the tip of the peninsula separating the east and west arms of Grand Traverse Bay.
Latitude: 44.9911, Longitude: -85.47963

For a larger map of Mission Point Lighthouse, click the lighthouse in the above map.

From Highway 31 in Traverse City, take Highway 37 north for 18 miles to the tip of the peninsula, where you will find Mission Point Lighthouse. The lighthouse opened to the public starting in June 2008. Hours are 10 a.m. to 5 p.m. daily, May through October, and noon to 4 p.m., Friday through Sunday, in November. To confirm these times, call (231) 645-0759.

The lighthouse is owned by Peninsula Township, and short-term keepers are allowed to live in the lighthouse. Grounds open, dwelling/tower open in season.


A sign notifies visitors to Mission Point Lighthouse that they are standing on the 45th parallel or halfway between the north pole and the equator.