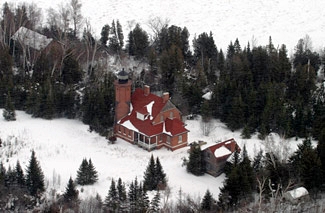 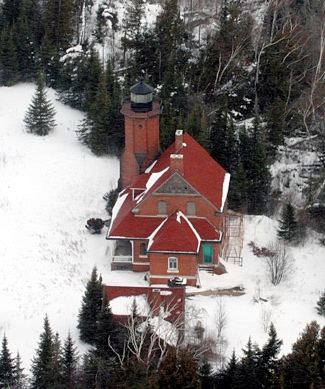 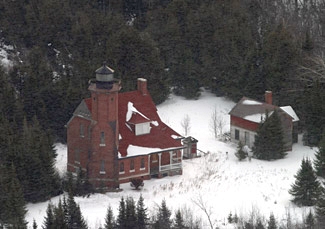 Squaw Island is just a half-mile long, north to south, and three-eighths of a mile wide, but being the northernmost island in the Beaver Island archipelago, it seemed a natural location for erecting a lighthouse. In 1880, the U.S. House of Representatives considered a bill providing for the construction of a lighthouse on Squaw Island, but when the Committee of Commerce consulted the Lighthouse Board regarding the necessity of the light, the board replied that the needs of commerce did not justify the establishment of a light there.

Seven years later, the Lighthouse Board had changed its mind as steamships were quickly becoming the dominant type of vessel on the Great Lakes. In its 1887 annual report, the Board noted: The passage to the westward of Beaver Island is being generally used by steam-barges from Chicago and Milwaukee and other ports on the lakes, during fall and spring, when the northwest winds prevail. It would be used at all times but for the shoals and dangers on the north shore of Lake Michigan. An appropriation has already been made for a light at Pointe Seul Choix, and with another at Squaw Island the passage can be made at all times with greater safety.

Congress authorized the establishment of a light and fog signal on Squaw Island on March 2, 1889 but failed to provide the requested $25,000 until March 3, 1891. The entire island was purchased from James Donner and Stephen ODowd for $2,000 in February 1892, and later that spring, the northern portion of the island was cleared of its evergreen and birch. A contract for the necessary metalwork was signed on April 22, and the metalwork was delivered in June. Meanwhile, the tender Amaranth landed workmen and construction supplies on the island in May, and work quickly began on the lighthouse.

The station plans called for a combination lighthouse and dwelling along with a fog signal house, oil house, barn, boathouse, landing, tramway, and well. The following description of the stations structures comes from the 1892 Annual Report of the Lighthouse Board.

The lighthouse and keepers dwelling are located about 350 feet from the most northerly point of the island. The tower is built of red brick and measures 11 feet square at its base, with three projecting buttresses. It is octagonal at the top and is surmounted by an octagonal cast-iron deck with gallery railing, and a fourth-order octagonal lantern. The height from base to focal plane is 48 feet. The tower is attached to and forms the northwest corner of the keepers dwelling. The dwelling is a two-story structure, having a vestibule and service room and a porch on the west side. It is covered by the continuation of the main roof. There is a one-story kitchen extension 15 feet square. The exterior of the building is red pressed brick, with limestone table and window sills. The roof is of shingles, painted bright red.

The fog-signal house is some 200 feet nearer the point and is about north by east from the center of the tower. It is a one-story red pressed-brick building measuring 22 by 40 feet, with a pitched roof covered with asphaltic slag roofing. This building contains duplicate fog-signal machinery, which consists of boilers, engines, and 10-inch steam whistles. The oil house is 75 feet eastward of the tower and is a square brick structure, provided with shelving to accommodate 350 gallons of oil in 5-gallon cans. The barn is about 40 feet in the rear of the dwelling. The lower part is of boards and battens; the upper part is shingled and the roof is shingled and painted red. The boathouse landing and tramway is located at the east side of the island, about 900 feet from the tower and dwelling. The boathouse is 16 feet by 36 feet in plan, of 1-inch boards and battens, has a shingle roof, and is painted red. Connected with it are boatways with oak rollers and a 4-ton winch. The landing is a log crib, and south of this there is a small boat landing, consisting of a crib 8 feet square with a bridge leading to the shore. A tramway extends from the boat landing westerly to the light-house, thence northerly to the fog signals. The entire length of the track is 1,176 feet. Walks of 2-inch plank are laid between the rails of the tramway, from the dwelling to the various buildings.

The lantern room housed a fourth-order, Sautter, Lemonier & Co. Fresnel lens that was placed in service on October 10, 1892. The lens revolved to produce a red flash every fifteen seconds, while the steam whistle gave five seconds blasts separated by alternate silent intervals of twenty and forty seconds, when necessary. The drop tube for the weight that revolved the lens was twenty-eight feet long, and the weight had to be wound up every three hours and forty minutes.

Two keepers were initially assigned to Squaw Island, but a third was added in 1893, making living conditions crowded. To improve the situation, the barn was converted into a five-room residence for an assistant keeper in 1895. Some 324 running feet of old plank walks were removed in 1905 and replaced by concrete. After Lansing Shoal Lighthouse was established roughly five miles north of Squaw Island in 1928, the islands light and fog signal were discontinued, allowing the stations personnel to be assigned elsewhere.

During the thirty-six years it was staffed, Squaw Island Lighthouse only had two head keepers, William Shields and Owen McCauley, and both of these men were the only survivors of a horrific accident in 1900.

The shipping season on Lake Michigan typically ran from April through mid-December, allowing the keepers on Squaw Island to spend the winter months elsewhere. After closing up the station, the keepers prepared to leave the island on December 14, 1900. Keeper Shields, his wife Mary, and his wifes niece Lucy Davis along with assistant keepers Owen McCauley and Lucien Morden boarded the stations twenty-two-foot sailboat and set off for Beaver Island. During the journey, the sailboat was struck by a sudden squall that tossed all of its occupants into the frigid lake. Everyone managed to reach the upset boat, and all but Morden, who refused to do so, were lashed to the craft. The two women perished later that day as darkness set in. Morden lasted a few more hours before he lost his grip, fell overboard, and drowned.

By the following morning, the sailboat had drifted into the steamer channel and was spotted by the Manhattan, bound for Manitowoc, Wisconsin with a load of coal. A small boat was lowered, and the two keepers, along with the bodies of the two, ice-covered women, were taken aboard the steamship and transported to Manitowoc. The men were treated at Holy Family Hospital, and Keeper McCauley was able to return home to Beaver Island later that month. Keeper Shields didnt fare as well. He remained in the hospital for six months, and his right leg had to be amputated at the knee.

Keeper Shields was subsequently appointed keeper of the new lighthouse depot at Charlevoix, while McCauley took charge of Squaw Island Lighthouse and remained there until it was discontinued in 1928. Between 1916 and 1919, Keeper McCauley and his assistants were recognized on five occasions for rendering assistance to a disabled vessel near the station. Having the opportunity to help someone in distress must have been gratifying for Keeper McCauley after his own ordeal years earlier.

Keeper McCauley spent the final eight years of his lighthouse service caring for the lights at St. Joseph, Michigan.

The government attempted to divest Squaw Island Lighthouse in July 1936, and renewed its efforts the next April, when bids for the property were accepted at Milwaukee, Wisconsin. At some point, the lighthouse did pass into private hands. The island and lighthouse were on the market for $3,200,000 in 2013, but in 2016, ninety-seven-year-old Tom Child, who had owned the lighthouse since about 1964, decided to restore the property. Child, who was aboard a warship at Pearl Harbor during the surprise Japanese attack in 1941, returned to Squaw Island Lighthouse, along with two of his daughters, in 2016 for the first time in nearly twenty years. In early September 2016, a bulldozer, excavator, generators, refrigerators, and construction material were towed to Squaw Island aboard a barge. Over the next three weeks, roughly a dozen workers from McDonough Construction camped on the island while they placed a new roof on the lighthouse, restored its exterior, and cut back trees and vegetation to open up the space around the lighthouse. A half-hour special entitled Saving the Lighthouse on Squaw Island was aired on Thanksgiving Day that year to share the work with the public.

For a larger map of Squaw Island Lighthouse, click the lighthouse in the above map.

As vegetation limits views from the water, Squaw Island Lighthouse is best seen from the air or by landing on the island. Fresh Air Aviation offers Lighthouse Air Tours that allow aerial photographs of this lighthouse, and Bonadeo Beaver Island Boat Charters offers tours to the island.

The fourth-order Fresnel lens used in Squaw Island Lighthouse is on display at the National Museum of the Great Lakes in Toledo, Ohio.

The lighthouse and island are privately owned. Grounds/dwelling/tower.