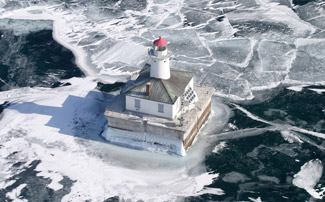 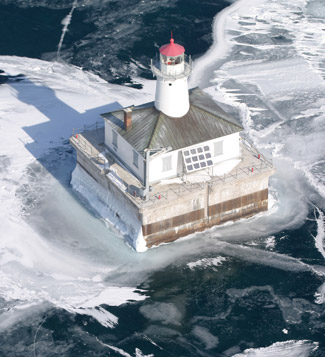 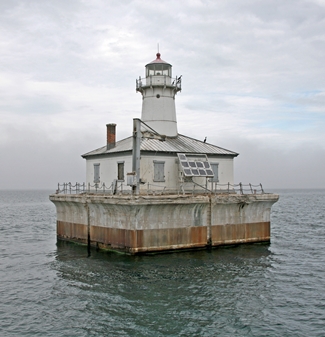 Cheboygan Lighthouse was built in 1851 to guide mariners through the South Channel that passes between the northern end of Michigans Lower Peninsula and the southern side of Bois Blanc Island. As vessels with deeper drafts became more common on the Great Lakes, shoals in the South Channel started to pose a significant threat, especially during storms. Two of these shoals were Poe Reef, located off the southeast tip of Bois Blanc Island, and Fourteen Foot Shoal, situated about a mile northwest of Cheboygan Lighthouse.

In 1913, the Lake Carriers Association requested a permanent lighthouse and fog signal to replace the lightship stationed at Poe Reef, but it wasnt until 1926 that the Commissioner of Lighthouses requested funds for such a project. After considering several options for improving navigational aids along the South Channel, it was decided to place a manned lighthouse on Poe Reef and a remotely controlled lighthouse on Fourteen Foot Shoal, which would allow Cheboygan Lighthouse to be discontinued. A gas buoy was anchored on Fourteen Foot Shoal on April 15, 1925, replacing a can buoy that had formerly marked the hazard.

Congress made an initial appropriation of $78,000 in early 1927 that allowed work to begin that summer on the new navigational aids. A site on Cheboygan River, two miles from Fourteen Foot Shoal, was leased as a base for operations during the project, and the construction camp on Government Island used for building Martin Reef Lighthouse was moved there. The forty-six-foot-square timber crib for Fourteen Foot Shoal was constructed onshore in July 1928 and then towed out into the lake the following month and filled with rock and cement.

A temporary light was used to mark the manmade obstruction, and work on the cement deck began in May 1929. This photograph taken on September 6, 1929, shows that the concrete deck was finished and significant progress had been made on the metal superstructure. By October 3, 1929, the lantern room had been installed atop the tower, and work was underway on the lighthouses hip roof.

Poe Reef Lighthouse was placed in operation on August 15, 1929, but Fourteen Foot Shoal Lighthouse was not finished before the end of that shipping season and instead went into service on April 18, 1930. The following description of the structure was published in the Annual Report of the Commissioner of Lighthouses:

Structure: The outer pockets of the crib are filled with mass concrete placed by the tremie process. The pier is protected by a belt of steel ice plating, and that portion of the pier above the timber crib is solid concrete with reinforced projection at deck similar to Poe Reef. The superstructure consists of a 1-story steel house rectangular in shape with sloping copper roof. A conical cast-iron tower rises from the center of this structure and houses the fog-signal diaphone and tanks as well as supporting the lantern and lighting equipment. Quarters are provided for one or two attendants. A boat crane, electrically operated, is provided on one corner of the pier.

Fog signal: The fog signal is a small-type diaphone operated by compressed air from motor-driven compressors which are in turn supplied with current from 5-kilowatt gasoline-engine generating units or from a storage battery.

Other equipment: Oil-engine generators are provided for battery charging. All mechanical equipment is in duplicate. The air compressors are pressure controlled, and the entire gasoline-engine generator set is controlled by radio from Poe Reef Station. Radiotelephone communication both with Poe Reef and the Cheboygan Range Light Station on shore is provided. The building is electric lighted and heated by hot air. At the close of the fiscal year the work was practically complete. Total cost, $73,000.

The Lighthouse Service felt confident that having a fog signal on Fourteen Foot Shoal out near the path of vessels would prevent some of the strandings that had occurred near Cheboygan Point caused by the inability to hear or properly locate the onshore fog signal. The radiotelephones improved life at an offshore station by relieving the keepers of any anxiety with regard to their family and facilitating their return to the station after shore leave.

Fourteen Foot Shoal Lighthouse was designed to be radio controlled from Poe Reef Lighthouse, located just four miles away, but until this system could be thoroughly proven, an observer was stationed at Fourteen Foot Shoal. In 1935, the system was no longer considered experimental, and the observer was withdrawn, as noted in that years Annual Report of the Lake Carriers Association:

Up until the opening of navigation in 1935 a single keeper was retained at the Fourteen Foot Shoal Station, his duties being merely to observe the operation of the equipment and keep up the station, having nothing whatever to do with its functioning. As a matter of fact, extreme precautions were taken to make sure that there was no hand manipulation of apparatus, the controls being all kept under lock. During the season of 1934 there was no time at which the controls failed to operate the station properly, and on the basis of this experience the service felt justified in removing the single keeper at the opening of navigation 1935, and it was operated throughout the entire season with equally satisfactory results with no keeper in attendance.

The Lighthouse Service anticipated an annual savings of $7,500 by having replaced a lightship, the most expensive type of navigational aid, and a two-keeper onshore station with two offshore lighthouses under the care of four men.

In 2002, the crew of the USCGC Mackinaw repainted and refurbished the lighthouse.

On May 16, 2012, Fourteen Foot Shoal Lighthouse was made available under the National Historic Lighthouse Preservation Act of 2000 to eligible federal, state, and local agencies, non-profit corporations, educational agencies, and community development organizations for educational, recreational, cultural, or historic preservation purposes. Interested entities were given two months to submit a letter of interest expressing their desire to submit an application for ownership. The new owner must obtain a private use agreement for the bottomlands beneath the lighthouse, which are owned by the State of Michigan.

After no group was found to assume responsibility for the lighthouse, the General Services Administration initiated an online auction for the structure on July 25, 2017. Five bidders participated in the auction, which ended on September 30, 2017 with a high bid of $133,333. The winning bid was over $20,000 more than that for nearby Poe Reef Lighthouse that sold at auction just nine days earlier.

For a larger map of Fourteen Foot Shoal Lighthouse, click the lighthouse in the above map.

The lighthouse is best viewed by boat and can be seen on eastbound lighthouse cruises offered by Sheplers. Fair views are available at Lighthouse Point near the ruins of Cheboygan Main Light Station in Cheboygan State Park and from Cheboygan Crib Light.