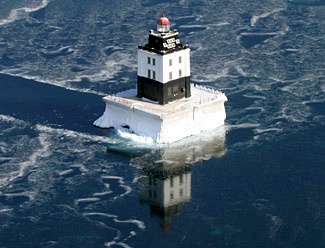 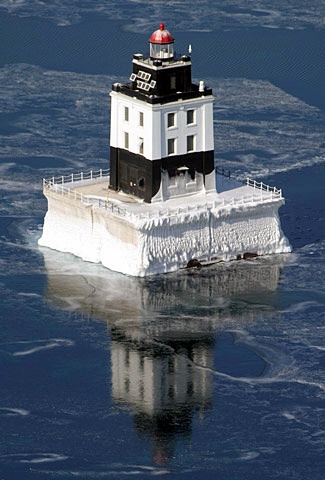 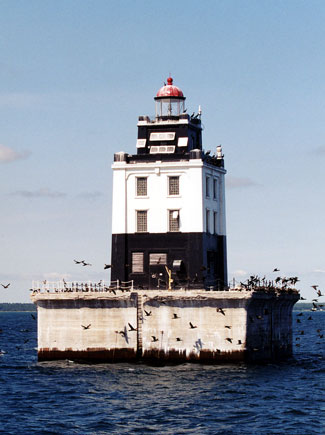 Cheboygan Lighthouse was built in 1851 to guide mariners through the South Channel that passes between the northern end of Michigans Lower Peninsula and the southern side of Bois Blanc Island. As vessels with deeper drafts became more common on the Great Lakes, shoals in the South Channel started to pose a significant threat, especially during storms. From the southeast point of Bois Blanc Island, a spit covered with fifteen feet of water extends a mile into Lake Huron, and five-eighths of a mile beyond this spit lies dangerous Poe Reef, a detached shoal, with a least depth of just twelve feet. In 1892, the Craig Shipbuilding Company of Toledo, Ohio was contracted to build four lightships for use on the Great Lakes. LV 62, a wooden-hulled vessel with a length of just over eighty-seven feet, was placed on Poe Reef on September 29, 1893, while her three sister ships LV 59, LV 60, and LV 61 were stationed, respectively, on Bar Point (Lake Erie), Eleven Foot Shoal (Lake Michigan), and Corsica Shoal (Lake Huron). With a red hull and POE REEF stenciled on its sides in white letters, LV 62 displayed a fixed white light from her foremast to mark the north side of the eastern entrance to South Channel.

LV 62 served Poe Reef, which is named after Orlando M. Poe, who served as the chief engineer of the eleventh lighthouse district, through the 1910 season, and then swapped stations with LV 59. In 1915, Poe Reef received a steel-hulled lightship, when LV 96 replaced LV 59. LV 96 marked the reef through the 1920 shipping season, and the following spring LV 99 started its service at Poe Reef.

The Lake Carriers Association had requested a permanent lighthouse and fog signal for Poe Reef as early as 1913, but it wasnt until 1926 that the Commissioner of Lighthouses requested funds for such a project. Besides being less costly to maintain, lighthouses had an additional advantage over lightships: they could remain on station throughout the year rather than having to be withdrawn when ice started to form on the lakes.

Congress made an initial appropriation of $78,000 in early 1927 that allowed work to begin that summer on a timber crib to serve as the lighthouses foundation. A site on Cheboygan River, seven miles from the reef, was leased as a base for operations, and the construction camp on Government Island used while building Martin Reef Lighthouse was moved there. A district force under the direction of Foreman John Sellman built the crib using twelve-inch-square timbers, and when it was complete, the crib was towed out into the lake by the tenders Marigold and Aspen and sunk in twenty-four feet of water on the southeast end of Poe Reef. Once the deck was completed and the frame for the lighthouse was erected, a bunkhouse was hoisted atop the crib on September 13, 1928 so the men could live on-site. Before the lighthouse was completed, several tyfon and diaphone fog horns were mounted outside the structure and tests were conducted on June 28 and 29 of 1929.

Poe Reef Lighthouse commenced operation on August 15, 1929, and LV 99 was withdrawn and transferred to the twelfth district. The following description of the new lighthouse was printed in the Annual Report of the Commissioner of Lighthouses:

Structure: The foundation is a pier 60 feet square rising about 18 feet 6 inches above water with a projecting coping all around at the deck level. A timber crib extending to a height of 1 foot below low water rests directly on the bottom previously prepared by leveling. The outer pockets of this crib are filled with tremic-placed concrete forming a wall about 9 feet thick of mass concrete around the entire pier within the crib work. The inner pockets of the crib are filled with stone. A belt of steel plating ½-inch thick and 7 feet wide is secured to the crib and extends about 3 feet 6 inches above water level to serve as protection from ice. This plate is secured to the concrete by anchors imbedded as the work proceeded. The entire pier above the crib top is of mass concrete with steel reinforcing in the overhang and elsewhere as needed. Basement and storage vaults lighted from the deck are provided within the pier.

The superstructure is of steel with masonry backing. The tower is rectangular with buttressed corners supporting a watch room with gallery and a third-order lens and lantern; focal plane, 71 feet above water level. The tower proper comprises three floors. The first floor houses the mechanical equipment and the second and third floors provide living accommodations which are adequate for three keepers.

Illuminating apparatus: The light is electric in a third-order fixed lens giving a candlepower of about 24,000. The double-flashing characteristic is produced by motor-driven flashers.

Fog signal: The fog signal is an air diaphone of powerful type supplied with air from oil-engine-driven air compressors. A low power radiobeacon forms a part of the equipment. The entire fog-signal and radiobeacon equipment is in duplicate, including the electric generating equipment.

Additional equipment: The building is heated by steam and is provided with a pressure plumbing system and electric lights. Radiotelephone communications with Fourteen Foot Shoal Light Station and with Cheboygan Range Light Station is provided. The gasoline launch is handled by air-operated cranes placed on two corners of the pier.

This station operates the new Fourteen-Foot Shoal Light Station, about 4 miles distant, by the assignment of one of the four keepers to duty at that point, and through the medium of radio remote-control apparatus capable of operating the mechanical equipment at the latter station at will as weather conditions may require.

In 1929, Poe Reef Lighthouse and Cape Henry Lighthouse became the first in the United States to be equipped with synchronized radiobeacons and fog signals. When these two signals are sent simultaneously, a mariner can note the time interval between the arrival of the radio signal and sound signal and calculate the vessels distance from the lighthouse.

A diver sent down to examine the foundation of the lighthouse in 1931 found that all four corners had been considerably undermined, with the greatest scouring having occurred on the northwest and southeast corners. The voids under the corners were filled with concrete using the tremie process, and, after the concrete had set, 1,952 tons of riprap were placed about the entire crib in 1932.

The establishment of lights on Poe Reef and Fourteen Foot Shoal allowed Cheboygan Lighthouse to be discontinued, and Fred Kling, the last keeper of Cheboygan Lighthouse, was appointed the first head keeper at Poe Reef. Kling served as a gun captain on the U.S.S. Texas during the Spanish-American War, and was one of twelve navy officers chosen to accompany to Washington the bodies of 153 sailors who lost their lives when the battleship Maine blew up in Havana Harbor.

Keeper Kling entered the Lighthouse Service in 1901 and served as an assistant keeper and head keeper at both Cheboygan Lighthouse and Spectacle Reef Lighthouse before being placed in charge of Poe Reef Lighthouse. Kling ended his thirty-year lightkeeping career in 1930, and during his retirement, he picked up the hobby of whittling gavels, which he gave to circuit judges and masters of Masonic lodge. A man of huge physique, Kling was a natural for playing the role of Paul Bunyan in Cheboygans homecoming celebration.

In 1934, business at Robert Westvelds service station in Fenville, Michigan was at a standstill, so he took the advice of a friend and inquired about a notice of civil service examinations for lighthouse keepers. Being mechanical and able to swim, Westveld easily passed the test and, after a shorty stay at the training school in Detroit, he was assigned to Poe Reef Lighthouse. From Poe Reef, Westveld was sent to Michigan Island in Lake Superior and Round Island in the Straits of Mackinac before returning to Poe Reef for the final eight years of his career.

Westveld elected to remain a civilian keeper when the Coast Guard took charge of lighthouses in 1939. During his second stint at Poe Reef, he was in charge of a five-man crew. Things are a lot more complicated now than they were in the old days, said Westfeld shortly after his retirement in 1954. A station used to have just a horn and a light, with an engine to run each. Now at Poe Reef we had four diesel engines, four gas-operated generators and an eight-foot long pane of radio instruments. It kept us hopping all the time. If our clock got three seconds off, we got a quick telegram from Washington, telling us about it. And if we got five seconds off, we had 24 hours to send them a letter explaining why. Those boats used to depend on out timing to find their way  so it was plenty important.

Keeper Westveld felt safe at the offshore station even in the spring when the current would push great masses of ice against the lighthouse, making hanging lamps swing violently in the upper floors of the tower. During severe storms, waves would break on the lighthouses concrete deck, twenty-three feet above the lake, and send spray nearly fifty feet higher where it would strike the fourth-story windows with enough force to drive water inside.

On May 1, 2013, the General Services Administration announced that Poe Reef Lighthouse was excess to the needs of the Coast Guard and was being made available at no cost to eligible entities defined as federal agencies, state and local agencies, non-profit corporations, educational agencies, or community development organizations, for education, park, recreation, cultural, or historic preservation purposes. Interested entities were given sixty days to submit a letter of interest. If the lighthouse is not transferred, it will be sold at auction.

For a larger map of Poe Reef Lighthouse, click the lighthouse in the above map.