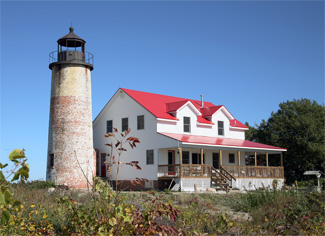 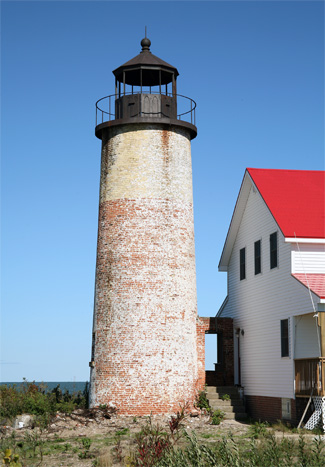 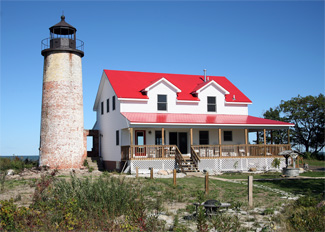 Michigans Charity Islands are located in the middle of Saginaw Bay, offshore from Caseville on the thumb and Au Gres on the opposite side of the bay. Made up of 230-acre Big Charity Island and Little Charity Island, its four-acre sister, the islands were named by early fisherman who believed Gods charity had placed them in the bay as a refuge from storms. While the islands might afford some protection, they were also a navigational hazard, being ringed by flats in all directions to a distance of two miles.

In 1837, Lieutenant G.J. Pendergrast, having been appointed to examine and select sites for lighthouses in the Great Lakes, reported that as the trade of Saginaw increases, there will be a light required on Charity island. The following year, Lieutenant James T. Homans added his recommendation for the light:

The navigation of Saginaw bay, from its great extent, is oftentimes as boisterous as that of the adjoining lake; and on its surface, the considerable commerce using it requires some additional aid from [the] Government to make the traverse secure. With a light-house on the northeastern part of the outermost of the Charity islands in that bay, which may be seen soon after leaving that on Point-aux-Barques, and form a connecting link with the one at the mouth of Saginaw river, the bay navigators will feel themselves more secure.

On August 18, 1856, Congress appropriated $5,000 for a lighthouse on Charity Island, and the structure was built in 1857 on the northwest point of the island. The lighthouse consisted of a thirty-nine-foot-tall, cylindrical, brick tower connected to a one-and-a-half-story keepers dwelling by a covered passageway. The brick tower had a diameter of eight feet and was surmounted by a decagonal, cast-iron lantern room that housed a fixed, fourth-order Fresnel lens. Built of wood and topped by a shingle roof, the keepers dwelling measured twenty-four by twenty-eight feet and had an attached twelve-by-thirteen-foot kitchen. The lighthouse cost $4,819.35, and Colin Graham was hired as its first keeper.

Lighthouse Board records carry little information regarding improvements to Charity Island Lighthouse. In 1868, it was noted that the plastering in the keepers dwelling had fallen in many places and that a new kitchen floor was required along with new sails and oars for the stations boat. The cribwork, which formed a small harbor and protected the stations boathouse, was damaged by ice during the winter of 1881  82, but was thoroughly repaired the next summer. A brick oil house, capable of storing 360 gallons of fuel, was erected near the lighthouse in 1900.

Charles McDonald served over thirty years as head keeper of Charity Island Lighthouse, far longer than anyone else, but his life was in danger on at least one occasion during that period. On July 6, 1900, Keeper McDonald was returning to the island with the four men who were building the oil house, when a squall struck their sailboat, cutting the canvas to ribbons and carrying away one of the masts. The men were thrown into the water but managed to hang onto the overturned boat and finally get back inside the vessel. After twenty hours, the men were spotted by some boys on the beach twelve miles east of Casveille and were soon rescued by the steamer Sprite.

Prior to becoming keeper at Charity Island, Captain McDonald had been in charge of the lifesaving station at Pointe aux Barques. For the first several years on the island, Keeper McDonalds wife and children lived with him, but when the children were school age, he purchased a farm near Caseveille for his family. The lighthouse could be a lonely place after his loved ones moved to the farm for the school year. Ill confess it, Mc Donald said. Ive prepared many a meal for myself, put it on the table, sat down to eat  and then let the tears roll down my cheeks till I couldnt see the food that stood before me.

On the night of December 4, 1885, the steamer Oconto was crossing Saginaw Bay in a blinding blizzard with twenty-two passengers and twenty-five crew aboard. As the seas increased, the Captain decided to turn his boat around and head for shelter in Tawas Bay. While bucking the waves, the starboard bulwarks were stove in and all the light freight on the hurricane deck was washed away. To make matters worse, a number of frightened horses and cows broke from their stalls and stampeded about. Around midnight, a light was spotted and the captain attempted to find the entrance to the bay. The light, however, proved to be Charity Island not Tawas Point, and the steamer was soon hard aground.

The boat remained intact through the remainder of the night, and the following morning, the steamer started blowing its whistles. Keeper McDonald and his assistant soon appeared on the south shore of Charity Island, and a lifeboat was launched to reach them. Everyone aboard was soon transferred to the island, where the men found shelter in two fish huts, and the two women and a child were taken to the lighthouse. Charles Brown, a colored cook who died of fright during the storm, was buried on Charity Island. When the weather improved, a detachment was sent ashore, and the lifesaving crew at Tawas was dispatched to bring the others to the mainland.

Keeper McDonald was intimately familiar with the flora and fauna of the island and was a great resource for naturalist N.A. Wood, who wrote a paper on the mammals and breeding birds of the islands. For example, when a pair of killdeer nested near the lighthouse in 1911, Keeper McDonald was certain it was the first time the species had bred on the island in the thirty years he had been there. The only mammals observed by Keeper McDonald on Charity Island were the red fox, American hare, cottontail, Says brown bat, silver-haired bat, red bat, and a single muskrat, all of which had likely crossed the ice to reach the island.

During the winter of 1902  03, a pair of red foxes took up residence on Charity Island and thrived on the hares and cottontails, before the supply started to run out in the spring. When the foxes started to target the keepers poultry, a hunter and hound were brought in from Caseville. The male fox was soon shot, and the female was later dug out of her den.

The light atop the tower was a magnet for June flies. Captain McDonald reported that one morning he filled over six bushel baskets with flies that had collected on the lighthouse gallery overnight. During the spring migration of 1910, Keeper McDonald picked up 174 brightly colored dead birds that had struck the lantern in just one night. McDonald observed that the birds never struck the light unless it was misty or foggy and very dark.

On June 3, 1916, the characteristic of the light on Charity Island was changed to a white flash every ten seconds, after an automated acetylene light was installed in the tower. Joseph Singleton, the last keeper on Charity Island, was transferred to Two Harbors Lighthouse, and later finished up his career at Crisp Point Lighthouse.

The government sold Charity Island to the Gillingham Fish Company in 1926, retaining just the lighthouse reservation. When Gravelly Shoal Lighthouse was established a few miles east of the island in 1942, Charity Island Lighthouse was discontinued. Five Saginaw businessmen acquired the island in 1963 from the Fish Company for development as an island resort, complete with a landing strip, bridle paths, and a biking trail. Also in 1963, the General Services Administration received a top bid of $15,500 for the lighthouse reservation on the island.

In 1986, Charity Island was listed for sale for $750,000 by its then owner Reed Draper, and in 1992, Standish real estate broker Robert Wiltse and other investors purchased it. Using 60,000 pounds of dynamite, they blasted a square-shaped harbor out of the island over a sixteen-week period and had soon received deposits from fifteen people interested in building homes on the island. Wiltse then had a change of heart regarding the development of the island and sold most of it to the U.S. Fish and Wildlife Service and a few acres to the Nature Conservancy, while retaining five acres that included the collapsed keepers dwelling for himself.

After architects told him the dwelling could not be saved, Wiltse removed it in 2003 and built a new structure atop the old foundation. His plans were originally to rent the dwelling, but he and his wife decided to live in their island home and offer sunset dinner cruises that allow the public to visit their island paradise.

For a larger map of Charity Island Lighthouse, click the lighthouse in the above map.

Cruises to the island provide an opportunity to see the lighthouse. The restored keeper's dwelling is privately owned. Arenac County Historical Society (Charity Island Preservation Committee) is working to restore and preserve the Charity Island Lighthouse tower. Distant views of the lighthouse can be had from US 23 in a few locations south of Alabaster and north of where US 23 makes the large turn to the west toward Au Gres.

The tower is owned by the Nature Conservancy, while the dwelling is privately owned. Grounds open, tower closed.


We took our first boat ride out to Charity Island on Memorial Day, 2003. What started out as a clear day, quickly turned foggy as we approached the island. We had to use a shallow draft boat in order to enter the harbor on the east side of the island, since the channel is quite shallow. As we approached the lighthouse after a short hike from the harbor, the two gentlemen who had provided our transportation were rather shocked to see that the keeper's dwelling had been torn down and burned. All that remained was the cylindrical tower, and the brick foundation where the dwelling once stood.

Shortly after our trip, I learned that the owner of the dwelling was responsible for its demolition. He saved some of the oak flooring and beams and plans to use them when he reconstructs the dwelling following the dwelling's original blue prints.

The Charity Island Preservation Committee of the Arenac County Historical Society is currently working towards restoring the tower and operating it as a "tourist and educational facility."