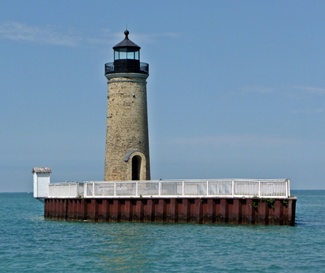 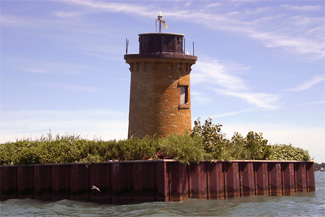 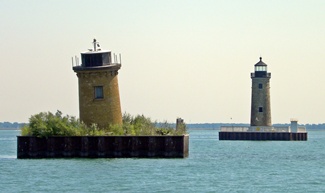 After having been appointed by the Board of Navy Commissioners to examine and select lighthouse sites in the Great Lakes, Lieutenant G.J. Pendergrast embarked on a lengthy voyage during the summer of 1837 and included the following on Lake St. Clair in his report:

At its head, [Lake St. Clair] becomes very shoal, particularly at the mouth of St. Clair river, where extensive flats make out, on which there is but ten feet water. The channel is exceedingly crooked for three or four miles, and in some places very narrow. These flats are dreaded by all persons, and are regarded as the most vexatious impediments they have to encounter. Vessels have been known to be two, and even three weeks in getting over them. I was unable to make any examinations at this place, and therefore do not feel qualified to propose any plan for its improvement. I may be permitted to remark, however, that I think the subject deserves the immediate attention of Government, and that no expense should be spared in removing the obstruction.

Not daring to enter St. Clair River from Lake St. Clair at night, mariners were forced to anchor and wait for daylight in what is still known today as Anchor Bay. On March 3, 1853, Congress appropriated $10,000 for making the foundation of two light-houses, one to be a beacon light, on the Saint Clair Flats; the places to be selected and the work executed under the direction of the Topographical Bureau. John James Abert, head of the Corps of Topographical Engineers, informed the Lighthouse Board that the foundations for the proposed structures would cost much more than $10,000 and recommended an additional $20,000 be obtained. Congress provided $20,000 for completing the lighthouse foundations on August 3, 1854, but the structures were not placed in operation until November 1, 1859.

At the time the range lights were built, St. Clair River emptied into Lake St. Clair through seven principal mouths, and the range was built to mark the South Channel, which was the most used. The rear range light consisted of a cylindrical tower connected to a two-story dwelling by a covered passageway. Built with yellow brick, this lighthouse stood on a pier foundation, and its fourth-order fixed white light shone from a height of thirty-seven feet above the pier and forty-four feet above the lake. The front tower, also known as the beacon light, was constructed of yellow brick on a pier located 1,000 feet south west of the rear light. A sixth-order Fresnel lens installed in the lantern room of the front tower produced a fixed white light at a height of twenty-three feet above the pier and twenty-eight feet above the lake.

After completing the lights, the engineer in charge of their construction noted: It is to be regretted that there is not a sufficient balance on hand to construct a suspension foot-bridge between the two lights. It would enable the keeper to perform his duties more regularly in stormy weather.

In 1867, the Lighthouse Board noted that the timber crib for the beacon light had settled some, but that no damage of any importance was expected as a result. Two years later, the Board reported that the settling cribs had indeed led to some damage as both towers were slightly cracked and the plastering of the dwelling was off in several places. Making repairs, however, was not deemed important as a cut across the flats was being dredged nearby and $60,000 had been appropriated for range lights to mark the new improved channel.

The new St. Clair Flats Canal Range Lights were put in operation in 1871, but the old range lights, known officially as the St. Clair Flats Range Lights, remained in operation. A survey made on May 18, 1873, found that the north corner of the crib for the front light of the old range was 1.51 feet lower than the south corner and that, at its focal plane, the front tower was five-and-a-half inches out of plumb. Two-and-a-half months later, another survey found that the north corner was now 1.665 feet lower than the south corner, and the tower was 5.95 inches out of plumb. To correct this growing problem, Congress allocated $10,000 on June 23, 1874 for rebuilding the crib and tower at the Saint Clair Flats lightstation. The crib and front tower were rebuilt in 1874, and the following year, it was found that the heavy masses of ice of the past winter had not disturbed the new crib in the least. The rear crib received some attention in 1889, when it and its deck were repaired.

In 1899, the lighthouse tender Amaranth delivered materials for rebuilding the boathouse on each pier and for repointing and cement-washing the exterior of both towers and the dwelling. The entire superstructure of the rear foundation crib was rebuilt and its deck planking renewed. Ten iron plates that protected the crib were taken off, straightened, and then put back in place. A fence was built around the top of the rear crib, and the boat crane was moved from the front crib to the rear crib.

St. Clair Flats Range was discontinued at the close of navigation in 1907, but on August 27, 1915, the range was re-established with the front light showing a white flash every second, and the rear light displaying a white light that was alternately on for one second and off for one second. By 1921, only small craft and tugs towing rafts were using the old channel as it had a depth of just twelve feet. The range lights were discontinued in 1934, and the dwelling at the rear light was torn down around this time.

While boating with his wife on Lake St. Clair in 1989, Chuck Brockman noted the poor condition of the range lights and thought that someone should really do something about that. Later that year, Brockman helped form Save Our South Channel Lights, (SOSCL) a non-profit, all-volunteer organization, focused on protecting and restoring the range lights. The group originally proposed a three-phase plan. First, the front tower, which was leaning and in danger of toppling over, would be secured and protected with a new foundation. Second, the rear light would receive a new foundation, and third, the keepers dwelling would be rebuilt.

In 1990, a temporary seawall was built around the threatened front tower, and the interior space was filled with limestone to shore-up the eroded foundation. This stop-gap measured succeeded in saving the front tower until a permanent seawall, measuring forty-two by forty-nine feet, was completed in 1996.

Armed with matching grants from the State Historic Preservation Office and Michigan Department of Environmental Quality and over $100,000 of its own money, SOSCL awarded a $599,000 contract to Mihm Enterprises in 2005 to build a new arrowhead-shaped foundation around the rear tower and rehabilitate the lighthouse. In recognition of this restorative work, SOSCL and Mihm Enterprises were given the 2009 Governors Award for Historic Preservation. A white fence was installed around the perimeter of the rear towers foundation in 2008 as part of an Eagle Scout project. Evidence of the much improved state of the rear lighthouse is the fact that two weddings were held on its grounds in 2011.

It took Brockman nearly twenty years to get the lighthouses to a state where they are in fair condition and protected from winter ice floes, but he and his organization arent done yet. You want to finish what you started, Brockman said. You know how they say, If I knew then what I know now? Well, now I know, but there's nothing I can do but finish it.

Chuck Brockman passed away in 2015 at his home on Harsens Island. Though SOSCL had lost its founding and only president, the organization was in good hands with the team Brockman had put together, and a new president was soon appointed to carry on the restoration effort.

The front tower is once again an active aid to navigation, showing a white flash every four seconds.

For a larger map of St. Clair Flats Range Lighthouse, click the lighthouse in the above map.

The St. Clair Flats South Channel Range Lights are best seen from the water, and Save Our South Channel Lights can help arrange transportation for you. A distant view of the lights is also possible from Harsens Island. To reach the island, take the ferry from Algonac, and proceed south on Highway 154 to its end at Clays Landing. From that point, continue further south on S. Channel Drive to its end, where the lights will be visible offshore.

The lights are owned by Save Our South Channel Lights. Towers closed.