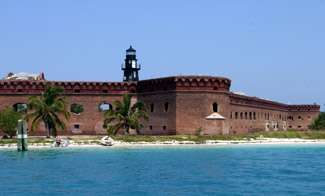 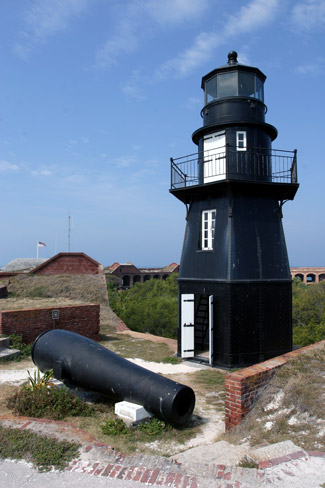 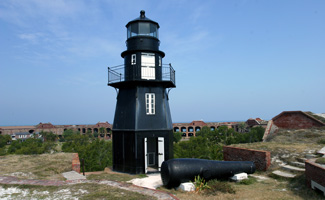 The Dry Tortugas, a small cluster of reefs, islands, and shoals seventy miles from Key West, are the terminal link in the Florida Keys. Juan Ponce de Leon anchored here on June 13, 1513, and due to the abundance of turtles on the islands, christened the area Las Tortugas. Later, the islands appeared on maps as the Dry Tortugas, alerting mariners that the area offered no fresh water. The collection of islands includes Loggerhead Key, Bush Key, Garden Key, Middle Key, Hospital Key, Long Key, and East Key. In 1819, Spain ceded Florida to the United States, although the treaty was not officially ratified until 1821. Shortly after gaining control of the territory, the federal government dispatched Commander Matthew C. Perry to survey the Floridian coastline. Recognizing the danger posed by the reefs surrounding the Florida Keys, Perry recommended the construction of lighthouses at Cape Florida, Key Largo, Sand Key, and at the Dry Tortugas. Congress appropriated $8,000 for the construction of Dry Tortugas Lighthouse on May 7, 1822, but this sum reverted to the treasury, and the same amount had to be reappropriated on May 26, 1824.

The site selected for the lighthouse was Garden Key, located near the center of the Dry Tortugas. From Garden Key, the light would cover all the islands and also mark the fine harbor just north of the island. En route to Florida, the ship carrying the building supplies was lost at sea, delaying the start of construction on the lighthouse until 1825. The conical brick tower rising to a height of sixty-five feet was completed in March of 1826, however the appointed keeper didnt arrive for several more months.

A U.S. revenue cutter was sent to transport John R. Flaherty, along with his family and belongings, from their home near Baltimore to the Dry Tortugas. The cutter was unable to accommodate all of the familys baggage, which should have been the first sign that this appointment to an isolated station just wasnt going to work. On July 4, 1826, Garden Key Light, consisting of fifteen lamps set in metal reflectors, was first exhibited by Keeper Flaherty.

Flahertys wife Rebecca strongly disliked the heat, boredom, and mosquitoes associated with her new environs and communicated her discomfort to the wife of President John Quincy Adams. Flaherty was described as a lazy and incompetent keeper whose mismanagement of the light led to the buildup of a thick coat of soot on the lantern glass, which greatly reduced the effectiveness of the light. After fourteen months at Garden Key, Flaherty swapped positions with the keeper of Sand Key Lighthouse near Key West, where he and his wife would be closer to civilization.

Even after the departure of Flaherty, mariners continued to complain about the inadequacy of the light. Captains claimed that a vessel would run aground on shoals and reefs before seeing the light. The original fifteen lamps were replaced by twenty-three new lamps and reflectors in 1838, however, this improvement did not stop the complaints.

The lighthouse at the Dry Tortugas was critical for all vessels transporting goods from the Mississippi River or the western shore of Florida, as they had to round the islands before heading up the eastern seaboard. The U.S. military also realized early on that any power, foreign or domestic, that controlled the Dry Tortugas would also control navigation in the Gulf of Mexico. Accordingly, work on Fort Jefferson, which would become known as the "Gibraltar of the Gulf," began in 1846 at Garden Key. The brick walls of the six-sided fort stand forty-five feet high and are eight feet thick and enclose most of the sixteen-acre island. The lighthouse was located inside the walls near the angle of Bastion C.

Work on the fort continued for three decades, but it was never completed. Although the fort was not involved in any battles, it did house over 2,200 prisoners over a ten-year period, with a peak of 900 prisoners in 1864 during the Civil War. The most noteworthy prisoners were four individuals convicted of complicity in the assassination of President Abraham Lincoln. Edman Spangler, who worked at Ford Theater, was convicted of aiding John Wilkes Booths flight from the murder scene. Both Samuel Arnold and Michael OLaughlen were sentenced to life for conspiring with Booth on an earlier plan to kidnap the President. Dr. Samuel Mudd was found guilty of conspiracy and harboring Booth during his escape, at which time Mudd set and splinted Booths leg that was broken in his jump from the State Box onto the theaters stage. The four prisoners arrived at Fort Jefferson in the summer of 1865.

An outbreak of yellow fever struck the fort in 1867, and among those who died from the disease were the forts physician and OLaughlen. Dr. Mudd, though he also contracted the disease, assumed a leadership role in caring for the sick. A petition in support of Mudd was later signed by noncommissioned officers and soldiers at the fort and sent to the federal government. In early 1869, the three surviving prisoners at Fort Jefferson connected to Lincolns assassination were pardoned by President Andrew Johnson.

To answer the call for a better light, a 150-foot-tall tower was built on Loggerhead Key, three miles west of Garden Key, in 1858. After the completion of the new lighthouse, the one on Garden Key was downgraded to a fourth-order harbor light and renamed Tortugas Harbor Lighthouse. A hurricane in October of 1873 delivered a devastating blow to the Dry Tortugas. Garden Key Lighthouse was badly damaged, and although repairs were made, the lighthouse inspectors recommended the tower be torn down and replaced by an iron structure erected on the walls of the fort. Congress appropriated $5,000 for the new structure on March 3, 1875, and the hexagonal, three-story tower made of boilerplate iron was in place atop Bastion C for its first lighting on April 5th of the following year. Thew new tower was ninety-three feet east of the original lighthouse. Three red sectors were added to the fixed white light in 1893.

A massive fire on Garden Key in 1912 destroyed the keepers dwelling and led to the installation of an automated acetylene light that same year. The light was discontinued in 1921, although a decorative light was later placed in the tower. The remote grouping of islands was designated the Fort Jefferson National Monument by President Roosevelt in 1935, and became Dry Tortugas National Park in 1992.

Garden Key Lighthouse was one of five Gulf Coast lighthouses featured on postage stamps released by the United States Postal Service in 2009.

In October 2020, the National Park Service initiated a $4.5 million restoration of Garden Key Lighthouse. The three-phase project will see a crew from Stone and Lime, Inc. dismantle the iron lighthouse piece-by-piece and transport the components to the mainland. Robinson Iron in Alexander, City, Alabama will perform metal conservation and repair of the lighthouse structure in phase two, and in phase three, Jablonski Building Conservation will reassemble the lighthouse in its original location.

For a larger map of Garden Key (Fort Jefferson) Lighthouse, click the lighthouse in the above map.

Dry Tortugas National Park can be reached by seaplane or by the Yankee Freedom ferry. You can walk around the top of the fort and get a good view of Garden Key Lighthouse, however, the lighthouse itself is not open to the public.


A voyage out to Dry Tortugas is a great day trip from Key West. Learning of Fort Jefferson's history from a ranger dressed (notwithstanding the heat) in a full Civil War uniform, watching the migrating birds soar overhead and dart about above nearby Bush Key, and snorkeling in crystal clear waters surrounding the fort are all activities that can be enjoyed along with the obligatory climb to the top of the fort to get a close-up view of the lighthouse. The foundation of the earlier brick lighthouse can still be seen inside the fort walls below the iron lighthouse.