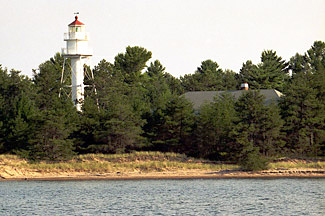 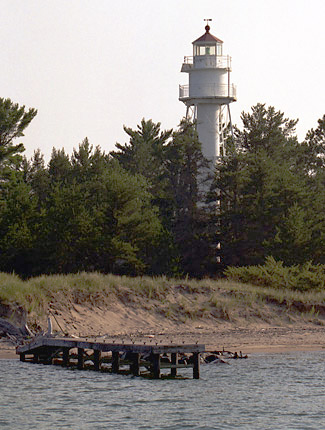 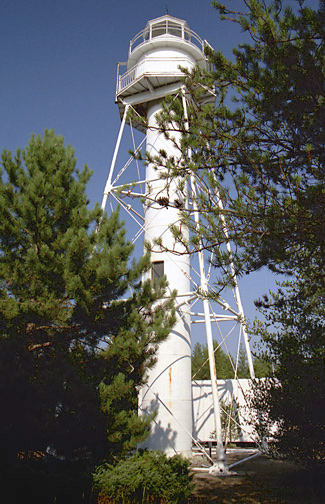 With a length of thirteen miles and an average width of three, Madeline Island is the largest of the Apostle Islands, and before the founding of Superior in 1853 and Duluth in 1854, the settlement of La Pointe, on the islands southwest shore, was the primary port on western Lake Superior. Originally established as a French trading post, La Pointe later became an outpost for the American Fur Company. In 1851, Congressman Orasmus Cole presented a memorial to the U.S. House of Representatives praying for a lighthouse for La Pointe. Congress appropriated $5,000 for the project on March 3, 1853, and the following month, the Lighthouse Board secured title to 152 acres on Long Island from Joseph LeBel. Captain Lorenzo Sitgreaves, a Lighthouse District Engineer, had recommended that the light be placed on Long Island as it would guide vessels approaching La Pointe from Lake Superior using the South Channel. Long Island hasnt been an island since the mid-1970s, when it became part of a peninsula stretching nearly eight miles into Lake Superior.

Sweet, Ransom, and Smith of Milwaukee were selected as the contractors for the lighthouse, and when their workers arrived in the area, they were directed to Michigan Island by Abraham Smolk, a local representative of the Lighthouse Board. The men dutifully erected a stone dwelling with attached tower only to have the work rejected by Captain Sitgreaves because it had been built on the wrong site. The contractors protested Sitgreaves rejection but were eventually forced to build a lighthouse on Long Island as well.

Rather than construct a second stone lighthouse, the contractors hastily erected a frame, one-and-a-half-story dwelling with a six-foot-square tower rising from one end of its pitched roof. A fourth-order Fresnel lens, installed in the towers nine-sided lantern room, went into service in 1858, sending forth a white light at a focal plane of forty-two feet. Michigan Island Lighthouse was discontinued with the establishment of LaPointe Lighthouse.

A stone pier foundation was placed beneath LaPointe Lighthouse in 1864 as the wind had removed much of the sand from around the structures foundation timbers, jeopardizing the integrity of the lighthouse. In 1868, stone brought in from Raspberry Island was crushed and placed around the lighthouse to prevent the shifting of the sand.

The influential Cleveland Vessel Owners Association petitioned the Lighthouse Board for a fog signal at LaPointe in 1887. The Board requested a $5,500 appropriation from Congress for a steam fog signal the following year, and the amount was granted on March 2, 1889. The machinery and boilers for the ten-inch steam fog signal were constructed under contract and then shipped from Detroit to LaPointe, where work on the fog signal commenced in October 1890 and was completed three months later. Located three-fourths of a mile east of the lighthouse, the signal commenced operation with the opening of shipping in 1891 and was active anywhere from 150 to 695 hours per season, while consuming between 8 and 35 tons of coal.

When Ashland Harbor became an important port for ore in the late 1880s, a light was needed on Chequamegon Point, the western tip of Long Island, to guide vessels into Chequamegon Bay. After being petitioned by the Lighthouse Board each year since 1890, Congress appropriated $10,000 on March 2, 1895 for establishing a light and fog bell on Chequamegon Point and for replacing LaPointe Lighthouse with a new tower near the steam fog signal. A construction foreman and work party arrived at the station on July 15, 1896, and worked throughout the summer at erecting two iron towers for the new lights. With funds expended, work stopped for the season on October 30, 1896 and did not resume until August 1897, after $1,500 had been appropriated for completing the project.

The new LaPointe Lighthouse, cast by Chamblin S. Scott of Richmond, Virginia at a cost of $3, 912, consisted of a pyramidal, skeletal tower built around a cylindrical stairwell. Topped by a circular watchroom and an octagonal lantern room, the tower stood just over sixty-five feet tall and commenced displaying a fixed white light from a Henry-Lepaute, fourth-order, Fresnel lens on October 11, 1897, the same day Chequamegon Point Light was established.

As the keepers at LaPointe were now responsible for two lights and a fog signal, the original lighthouse was raised, a brick first story was added, and the rooms were arranged to create two separate dwellings that would allow a second assistant keeper to be assigned to the station. The wooden tower and lantern were removed from the dwelling as part of the renovations.

Joseph Sexton was appointed head keeper at LaPointe in 1889 and served at the station until his retirement in 1921. He witnessed the completion of the fog signal and the addition of the two new lighthouses and occasionally commented about these changes and other happenings in the stations logbook. For example, on August 31, 1897, Keeper Sexton noted that he helped hoist two cast iron deck plates, which weigh 1,100 pounds apiece, to the top of the new LaPointe Lighthouse.

Here is a sampling of some of his other entries:

August 5, 1894: Returned with my wife. Married Sunday the 5th, 8 A.M. This was Sophia, Keeper Sextons second wife, a niece of Mary, his deceased first wife. Mary bore five children, and Sophia would have six while at the station.

November 30, 1896: SSW smoky on the water. Still cold and thick. The bay is mostly froze over. Tonight will finish it. One steamer went out 5 P.M. Thur. at AM 15 below zero. At 12:30 PM just zero. 5 PM zero. This month has been a hard one. The steam at fog signal was not below 40 # since the first of November. We close the month well and the old whistle a-booming. Good bye November.

July 21, 1897: Chopped the timber down across the point to get the wind to drive the flies away for they are very bad.

December 8, 1898: In hope to leave station today. Discontinued light this day. All well. Have not seen a steamer for some days. Glad to shut down. Very nasty. The snow is very deep.

October 24, 1899: Packed up the berries and fruit for town. The first nice day I will bring my folk to town so that the children can go to school. N.E. moderate fog. Barometer 29.18.

May 27, 1909: Lightning struck the tower at the fog signal & put out the light 9:10 P.M. & tore up the slab walk some for about 300 feet and run around the signal. A lightning rod was placed atop the tower the following November, and its cable was buried eight feet deep in the sand.

October 4, 1910: Worked at the walk. Heard today that Ed Sexton was drowned. Hope not. Ed Sexton, son of Keeper Joseph Sexton, was serving as first assistant keeper at Split Rock Lighthouse in Minnesota when he and Second Assistant Keeper Roy Gill drowned on October 2, 1910 while going for mail in the stations rowboat.

The following article from the Bayfield County Press of December 12, 1919 shows how difficult leaving the station at the close of the season could be:

Light keeper Joe Sexton and assistants Anderson and Lewis had a most strenuous trip in coming over from the station on Long Island. They started out from the island to cross the channel on the ice to Houghton Point. Owing to the fact that they were pulling a heavy sled well laden, the trip was necessarily slow with the result that assistant Anderson froze four of his toes. The men were put up at Houghton Point by residents on Wednesday evening, and came on to Bayfield by train yesterday afternoon.

On April 18, 1925, a powerful air diaphone, the first to be used in the Apostle Islands, replaced the stations steam whistle, and on October 20, 1927 a radiobeacon was erected as an additional aid for mariners. The fog signal and radiobeacon were synchronized in 1931. LaPointe Lighthouse was electrified on August 3, 1937, and over the following two years a triplex was built near the tower and fog signal building using Public Works Administration funds.

After several years as an assistant at the station, Benjamin Hudak became head keeper in 1948 and served in that role until the station was automated in 1964.

The skeletal tower, triplex, and an oil house remain standing on Long Island today, along with ruins of the 1858 lighthouse and the foundation of the fog signal building.

For a larger map of LaPointe Lighthouse, click the lighthouse in the above map.

LaPointe Lighthouse is best seen by landing on the island. Boat tours that pass by the island are offered by Apostle Islands Cruise Service. The Lighthouse Celebration, held annually in September, provides an opportunity to to see many of the lighthouses of the Apostle Islands.