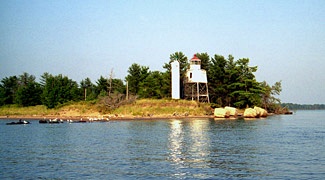 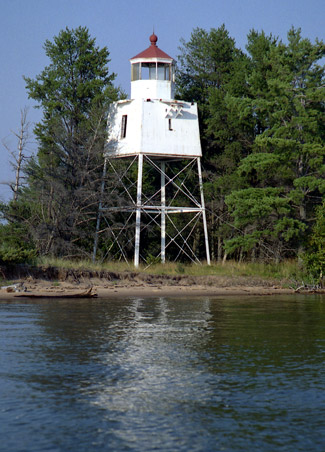 Derived from an Ojibwe word meaning long sand bar, the name Chequamegon has been applied to the large bay protected from Lake Superior by Long Island. Though once an island, Long Island is now part of a peninsula that stretches nearly eight miles out into Lake Superior, creating a natural breakwater for Chequamegon Bay.

LaPointe Lighthouse was established on Long Island in 1858 to guide vessels to LaPointe, on the southwest side of Madeline Island, but after Ashland became the dominant port in the area in the late 1880s, another light was needed to mark the western extremity of Long Island known as Chequamegon Point. In 1890, the Lighthouse Board requested funds to move LaPointe Light one mile east, where it would serve next to a new fog signal for which $5,500 had been appropriated on March 2, 1889, and to establish a harbor light and fog bell at Chequamegon Point. An estimate of $7,500 was submitted for relocating LaPointe Light and $2,500 for a light and bell at Chequamegon Point.

The requested funds were approved on March 2, 1895, and negotiations for a site on the point were opened in July 1895 and finished on March 18, 1896. Joseph Le Bel was paid $600 for 1.8 acres on the point and a ten-foot-wide right-of-way to LaPointe Lighthouse. After the Wisconsin Legislature gave their consent to the project, work on the point began during the summer of 1896. Four concrete piers, measuring five inches square and five feet deep, were placed for the towers corner posts, and a central three-foot-square pier was laid to support the shaft that encased the weights for powering the fog bell striking mechanism. Workers then raised the iron frame, sheathed the watchroom, and installed glass panes in the octagonal lantern room. Fulton Iron and Engine Works of Detroit, Michigan cast the tower and shaft for $862.

Work ended on October 30, 1896 due to a lack of funds. After an additional $1,500 for relocating LaPointe Light and establishing Chequamegon Point Light was appropriated on June 4, 1897, work resumed in August 1897, and a fixed red light and fog bell were placed in operation on the point on October 11, 1897. The fourth-order lens used in the old LaPointe Lighthouse was transferred to Chequamegon Point.

The new LaPointe fog signal, a ten-inch steam whistle was commissioned at the opening of navigation in 1891, and the LaPointe Light, relocated to a new, skeletal tower erected near the fog signal building, was established on October 11, 1897, the same day as Chequamegon Point Lighthouse.

The pyramidal, iron tower at Chequamegon Point stood forty feet tall and was painted white, except for its lantern room, which was black. A plank walk connected the tower to the dwelling at LaPointe Light Station, which was 2,700 feet to the east. Maintaining Chequamegon Point Light was added to the responsibilities of the keepers at LaPointe. After a concrete path replaced the plank walk, the keepers would occasionally use bicycles to cover the distance.

Chequamegon Points 1,200-pound bronze fog bell was suspended from brackets on the west side of the watchroom and struck one blow every twenty seconds by a Stevens striking machine, whose weights had to be wound up every four hours. The fog bell is now on display on the grounds of the Madeline Island Historical Museum.

In 1904, three cribs, measuring twelve feet wide and thirty-two feet long, were placed on the point to protect the site from further erosion. The log cribs, filled with stone and decked with three-inch planks, were spaced 100 feet apart and rose three feet above the water.

The lights at Chequamegon Point and LaPointe were electrified in 1937 and then automated in 1964, which allowed the station to be de-staffed. The characteristic of Chequamegon Point Light was changed from red to green in 1947. The Coast Guard established a new light atop a D9 cylindrical tower at Chequamegon Point in 1987, and the old iron tower was relocated approximately 100 feet inland to protect it from the eroding shoreline. A helicopter, brought in to move the tower, ended up dragging it across the ground, causing damage to its legs, cross braces, and access ladder.

Long Island was added to Apostle Islands National Lakeshore in 1986, and between 2006 and 2008, the Park Service hired Nelson Construction to straighten the bent legs and place the tower on new concrete footings. The Park Service plans to work with the Coast Guard to return the light to the historic tower and to reestablish open views of the tower from the water.

For a larger map of Chequamegon Point Lighthouse, click the lighthouse in the above map.