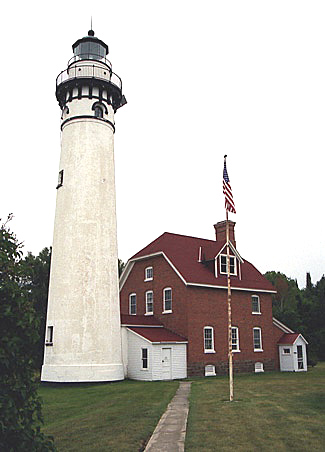 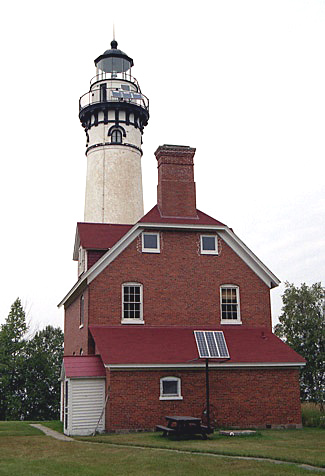 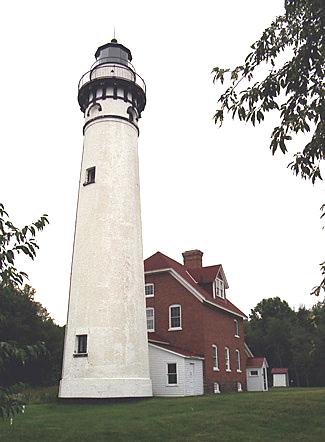 The Apostle Islands are a collection of twenty-two islands in Lake Superior, situated off the Bayfield Peninsula in northern Wisconsin. Twelve of the islands are over 1,000 acres in size, with the largest of the remaining ten being 788 acres and the smallest just four acres. Pierre François Xavier de Charlevoix, a French Jesuit traveler and historian, named the collection of islands after the twelve apostles. Michigan Island Lighthouse was commissioned in 1857 to guide vessels to the settlement of La Pointe, located on Madeline Island, the largest of the Apostle Islands. At that time, La Pointe was the principal port on western Lake Superior, but it soon lost that title to Duluth, Minnesota. In 1871, the Lighthouse Board requested funds for a lighthouse on Outer Island, the easternmost and northernmost island in the group, to guide vessels around the islands.

The through commerce to and from the western end of Lake Superior, increasing so rapidly as the railroads having their termini at Du Luth are extended to the westward, all passes outside of the Apostle Islands, and is greatly in need of a Light-house on the northern end of Outer Island. This should be a Light of the third order, and will cost $40,000, which sum is respectfully recommended to be appropriated.

Congress appropriated the necessary funds on March 3, 1873, and work commenced on the island that August under the supervision of Louis Lederle. Bad weather forced the crew to leave the island in early October, by which time they had completed the boat landing and laid the foundations for the dwelling and tower.

Work resumed in May 1874 but stopped soon thereafter when it was discovered that the station was being built on the wrong site. Four news acres, located about 1,300 feet away, had to be cleared before work could start anew. A circular, brick tower was built that was linked to a two-and-a-half-story, brick keepers dwelling by a covered passageway. The impressive lighthouse incorporated such details as a cut-brownstone foundation for the dwelling and sixteen ornate brackets to support the large gallery, situated just above a series of arched windows that circled the top of the tower.

Army Quartermaster General Montgomery Meigs praised the Italianate architectural style used in the lighthouse, writing, I rejoice to see that the Board is paying some attention to architectural design in the newer lighthouses, and that there is a prospect that hereafter the Bald towers which for so many years have offended all persons of taste will give place, at very little increase of original cost, to buildings which it will be a pleasure to regard.

Besides the lighthouse, the station was also equipped with a fog signal building, privy, and a boathouse. Construction work on Outer Island was completed in September 1874, allowing a third-order, L. Sautter & Co. Fresnel lens to be installed in the lantern room. The lens had six bulls-eye flash panels and revolved once in nine minutes to produce a white flash every ninety seconds. The tower has a unique feature: a wooden shelf, which during daylight hours could be inserted into the towers double walls to hold the clockwork mechanisms weight and reduce the strain on the support cable.

Outer Island Lighthouse was placed in service on October 20, 1874, with Keeper Orator K. Hall noting in the stations log: It gives a splendid light. The tower had a height of just over eighty-six feet, but thanks to the bluff on which it stood, its focal plane was a lofty 130 feet above Lake Superior. A head keeper, two assistants, and their families shared the dwellings nine rooms.

A steam fog signal, located at the base of the bluffs near the tower, commenced operation on November 5, 1874, and was the first fog signal in the Apostle Islands. The structure was destroyed just a few weeks later when part of the bluffs collapsed on the building. A replacement fog signal was built atop the bluff the next year, and in 1878, a second fog signal building was built 100 feet from the first to house a duplicate, ten-inch, steam fog whistle.

The steam whistles were fed by well water held in a cistern, but as the well would often run dry, a steam injector was installed in 1886 to pump water from the lake to the fog signals and dwelling. The fog signals were in operation roughly 275 hours per year, consuming around thirteen tons of coal. A steam hoisting engine was added in 1887 to facilitate the delivery of coal to the station. In 1901, the second fog signal house was relocated and attached to the original one. A diaphone fog signal replaced the steam fog signals in 1929.

Robert Carlson was appointed second assistant keeper at Outer Island in 1891, the same year he married Anna Maria Palmgren. A city girl, Anna at first had a hard time adapting to life on an isolated island as she told a reporter years later.

I had three persons to talk to: my husband, who was assistant keeper, the head keeper (John Leonard), an old man with but one eye, and a fisherman who came that summer and lived in a shack down the shore.

Oh! The loneliness of those days on Outer Island! There was nothing to see but water, with the dim outline of other islands of the Apostles group behind the haze, and an occasional steamer way out on the lake. When my housework was done, my husband used to take me down the shore to the fishermans shack, where we would visit for a while. Or we would walk out into the woods.

That was my life, day in and day out. Going ashore to the mainland, 40 miles away, meant riding in a sailboat, which always frightened me. Nights I would look out of the window and see nothing but the dark water; no lights anywhere, not even in the fishermans shanty, which was too far away.

My husband has said many times, since those lonely years, How did you ever endure it! There is just one answer to it all. I loved him.

A daughter was born to the Carlsons in October 1892, and they transferred to Michigan Island the following year. They would later serve at Marquette Lighthouse and Whitefish Point Lighthouse.

When built in 1900, the three-masted, 338-foot-long, schooner-barge Pretoria was the largest wooden vessel in the world. On September 2, 1905, the Pretoria, loaded with iron ore, was being towed by the steamer Venezuela, when a terrible storm, the worst on Lake Superior in over thirty years, disabled the Pretorias steering gear and caused its tow line to part. John Irvine was keeper on Outer Island that day and recorded the following in the stations log:

Cleaning, Trimming Lamps and Lens. Tending Signal. A Terable gale blowing from the NE, the Biggest Sea that I have seen since I have been at the Station which is eight years. About 2:30 PM, sighted a Schooner at anchor about too miles NE of Station. About 4 PM seen [a] small boat leaving Schooner. I, the Keeper, hurried down the beach with a white flag in my hand, and a piece of rope to render what assistance I could. I helped to pull five men ashore, pretty well eshausted.

The following account of the tragedy appeared in newspapers throughout the country:

It was definitely learned here tonight [at Duluth] that the sunken schooner near Outer Island is the Pretoria. Five of her crew of 10 were drowned by the capsizing of the yawl in which the crew took refuge when the boat began to founder.

The crew lost control of the yawl and were spilled into the lake. Five were drowned, but the others clung to the overturned boat. They were 500 feet from shore. John Irvine, observing the plight of the sailors, launched his own boat in the boiling sea with the help of his assistant and saved them at great risk.

Keeper Irvine housed and fed the survivors for two days, until the Venezuela returned looking for her consort and picked up the men. In August 1892, Henry Crump, the district lampist, replaced Outer Islands lard oil lamps with kerosene lamps. A brick oil house, with an iron door, was built sixty feet southwest of the dwelling in 1895 for storing the more volatile fuel. The intensity of the light was increased from 18,000 to 110,000 candlepower in 1913 by changing the illuminant from kerosene to incandescent oil vapor. The light was electrified in May 1942.

The Coast Guard assumed responsibility for Outer Island Lighthouse in 1939 and staffed it with a three-man crew until the light was automated on October 5, 1961. At that time, the Fresnel lens was removed and replaced by a solar-powered optic. Outer Island Lightstation retains its dock and tramway, a fog signal building with intact diaphone horns, and oil house and privy.

With the establishment of the Apostle Islands National Lakeshore in 1970, the National Park Service assumed responsibility for the islands lighthouses, including the one on Outer Island. During 2004 and 2005, an erosion control project was carried out at Outer Island to stabilize the bluff, whose gradual loss was threatening the lighthouse. The base of the cliff was armored with a massive stone wall, and drainage on the station grounds was improved to prevent runoff from eroding the clay bank. Vegetation was also to be planted to anchor the slope, but a depletion of funds prevented completion of this part of the project.

Outer Island Lighthouse stands atop the northernmost point in Wisconsin, but few are the number of residents of the Badger State who have ever stepped foot there. Those that do make the effort are rewarded with a spectacular view of Lake Superiors clear, aquamarine waters from atop one of the states most picturesque lighthouses. Park Service volunteers live in the lighthouse during the summer.

For a larger map of Outer Island Lighthouse, click the lighthouse in the above map.

Outer Island Lighthouse is best by going ashore on the island. Boat tours that pass by the island are offered by Apostle Islands Cruise Service. The Lighthouse Celebration, held annually in September, provides an opportunity to land on the island and visit the lighthouse.

The third-order Fresnel lens from Outer Island Lighthouse is on display at the Coast Guard Museum in New London, Connecticut.

The lighthouse is owned by the National Park Service. Grounds open, dwelling/tower open in season.