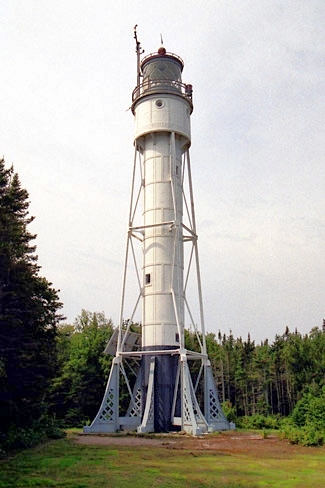 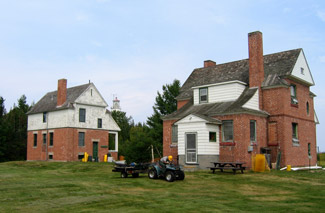 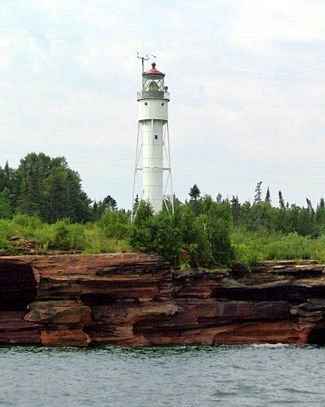 When Devils Island Lighthouse was finally activated in 1901, it became the eighth and final lighthouse to be built in the Apostle Islands. F. Ross Holland, a park historian for the National Park Service, made this bold declaration in one of his lighthouse books: Within the boundaries of Apostle Islands National Lakeshore is the largest and finest single collection of lighthouses in the country. Built in diverse styles and with a wide variety of materials, the lighthouses of the Apostle Islands truly are a prized collection, and its almost as if they were built to be a national park showcasing lighthouses. On March 2, 1889, Congress appropriated $15,000 for a lighthouse on Devils Island, the most northern island in the Apostle Island archipelago. When finished, the lighthouse would serve as a coastal light, splitting the gap between the lighthouses on Sand Island and Outer Island. Deciding that the island would need a fog signal as well, the Lighthouse Board asked for and received an additional $5,500 for this purpose in 1890.

In 1891, realizing an additional $22,000 would be needed to complete the station, the Lighthouse Board erected a four-story, pyramidal, wooden tower on the northern end of Devils Island to display a temporary, fixed red light of the fourth order. The light went into service on September 30, 1891, along with a ten-inch steam whistle housed in a one-story frame structure covered with heavy sheathing and corrugated iron outside and smooth iron inside. The wooden tower was twenty-four feet square at the base, and nine feet six, six inches square at the top of the enclosed watchroom, which was surmounted by an octagonal lantern room.

In addition to the fog signal and temporary tower, ten acres of land were cleared so the light could be seen from all points of approach. A brick oil house and the first of two, stunning, redbrick, Queen Anne style keepers dwellings were also erected in 1891, along with a landing and the stations boathouse, situated at the southern end of the island. A covered stairway, just north of the fog signal building, provided access to the lake.

Title to the island was secured for $1,600 in 1895 through condemnation, and the State of Wisconsin ceded jurisdiction to the federal government. On March 2, 1895, Congress appropriated $22,000 for constructing a permanent tower, but as a second dwelling was also needed, the act was modified on June 11, 1896 so $4,000 of the sum could be used for the dwelling.

A work party arrived on Devils Island on July 1, 1897 and commenced construction of the assistant keepers dwelling. The metalwork for the tower was delivered in June 1898, and the permanent lighthouse was completed on October 17, 1898. The third-order Fresnel lens, ordered from Henry-Lepaute of Paris, France, finally arrived at the station on June 22, 1901 and was placed in operation on September 20, 1901. The lens had eight flash panels, and while completing one revolution every eighty seconds, it would alternately produce red and white flashes every ten seconds.

The work crew in 1901 also built a fuel storage building for the fog signal, cleared about 1,000 feet of roadway to connect the boathouse to the tower and other buildings, and built a brownstone building for a hoisting engine on the northern end of the island.

Built of half-inch-thick steel plates, the cylindrical tower stands eighty feet tall and was originally braced at its base by eight latticed buttresses that stood thirteen feet high. A similar tower was also erected in 1898 at the entrance to the Sturgeon Bay Ship Canal in Wisconsin, and it was soon found that the design had a major flaw: the tower would shake violently in high winds. In 1914, four of the buttresses were moved out from the tower and connected to vertical columns, linked with cross braces, that ran up the tower and connected to the watchroom. Also in 1914, the illuminant was changed to incandescent oil-vapor that increased the intensity of the red and white flashes.

The temporary frame lighthouse was taken down in 1903, and its lens and lantern room were placed in storage before being used atop Crisp Point Lighthouse, which was completed in 1904.

Alexander McLean was serving as head keeper at Devils Island when the permanent tower was erected. Keeper McLean spent nearly three years on Menagerie Island as an assistant before being made head keeper at Michigan Island. His stint there lasted just four months, before McLean was transferred to Devils Island in October 1898. The isolated life on islands in Lake Superior somehow didnt prevent Keeper McLean from finding a wife, and in 1903 he married Cecelia Carlson.

Cecelia spent her honeymoon on Devils Island and the next thirty years as the wife of a lighthouse keeper, but she never developed a liking for life at a lighthouse. On Devils Island in storms the spray used to dash against my living room windows, 600 feet from the cliffs, and ooze through the windows and flood the floors so that I would have to take rags and sop it up, she recalled. I spent six years on the island. Tourists used to come from Bayfield and that was all the social contact I had. We always seemed to be on lonely outposts.

A radiobeacon was established on Devils Island on October 30, 1925. A powerful air diaphone fog signal replaced the steam whistle on April 13, 1927, and in 1928 the light was electrified.

The September 1928 edition of the Lighthouse Service Bulletin noted a visit to Devils Island by President Calvin Coolidge and his wife during an eighty-eight-day vacation in northern Wisconsin.

The presidential party arrived at noon on the yacht Nellwood from Bayfield, Wis., with a party of about 50 on board, the yacht being convoyed by the Coast Guard cutter Crawford, the steamer Madeline, and two speed boats. Lunch was served on the east dock at the light station, and the Nellwood left at 2 p.m. for Madeline Island.

The light keeper states that the President and Mrs. Coolidge expressed themselves as well pleased with the visit to the lighthouse and hoped they would be able to make another visit next year.

It is believed that this is the first time in a long while that a light station had been honored by a visit from the President.

After lunch, the President toured the lighthouse and signed the stations logbook. Hans F. Christensen, who was head keeper at the time, said, Its the first time in my four years here or my 12 years at Eagle Harbor, that anything so great has happened. The keeper declared the he was going to inform his inspector that Devils Island Lighthouse had been inspected and OKd by the President of the United States himself.

James Bard served as first and second assistant keeper at Devils Island between 1929 and 1934 prior to returning to serve as head keeper at Devils Island from 1939 to 1941. In the interim, he had been in charge of Passage Island Lighthouse followed by Whitefish Point Lighthouse. Marjorie Bard, the sixteen-year-old daughter of Keeper Bard, was scrubbing the stairway in the keepers dwelling on Devils Island, prior to going to the mainland to enter Bayfield High School, when she tripped and fell on September 30, 1939. Marjorie fractured her hip in the fall and lost consciousness two hours later. Keeper Bard had lost a daughter to pneumonia at Whitefish Point before doctors could reach her, so he didnt want to waste any time getting Marjorie off the island. A strong northwest wind had kicked up waves too large for the islands twenty-six-foot boat, forcing Bard to use the stations radiotelephone to call for help.

The message from Devils Island was relayed to the lighthouse tender Diligence, and it altered course and arrived off the island at 11 p.m., roughly two hours after the fall. Marjorie was lashed to a bedspring and then carried across the island to the waiting tender, a journey that took five hours instead of the usual twenty-five minutes. A tarp was rigged up on the Diligences deck, as the bedspring was too large to be carried below deck. The Diligence arrived at Bayfield two hours later, and Marjorie was taken to the hospital in Ashland by ambulance for x-rays. Marjorie recovered from injuries, and in 1997, she was able to return to her childhood home on Devils Island with her husband, one year before she passed away.

Despite protests from local citizens and the Park Service, the Coast Guard removed the third-order Fresnel lens from Devils Island Lighthouse in 1989 after replacing it with a modern beacon mounted on the gallery railing. The lighthouse on Devils Island was the only one in the Apostle Islands still using a Fresnel lens. Local residents sued the Coast Guard for removing the lens from the tower, which had been placed on the National Register of Historic Places in 1977, without proper notification.

Just three years later, the Park Service decided it would be fitting to return the lens to its original lantern room. After a Park Service conservator had spent three weeks restoring it, the lens was crated up and flown to Devils Island on a National Guard helicopter. On September 1, 1992, a tractor provided the power to hoist the 600-pound pieces up to the lantern room, where Robert Bolen, of Crescent City, California, reassembled them. Though inactive, the lens is at least back home where it had served mariners for over seventy-five years.

The station retains its fog signal building, oil houses, and two brick Queen Anne keepers dwellings. The northern end of Devils Island is ringed with sea caves seen here below the keeper's dwellings, and here below the tower.

For a larger map of Devils Island Lighthouse, click the lighthouse in the above map.