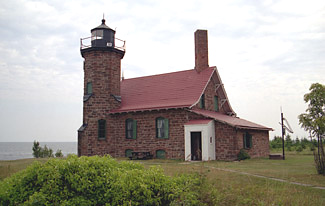 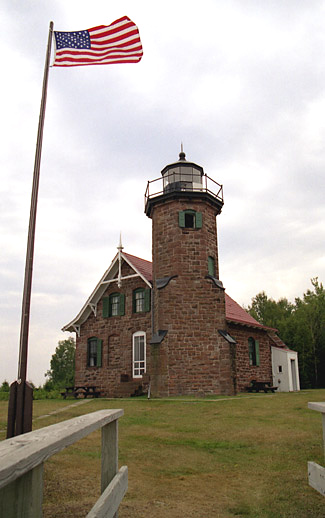 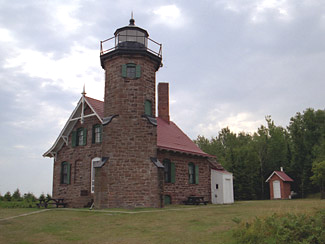 In 1871, the Lighthouse Board requested funds to establish lights on Outer Island and Sand Island to mark, respectively, the eastern and western extremities of the Apostle Islands. Lighthouses had earlier been established on Michigan Island, Long Island, and Raspberry Island to help vessels navigate through the islands, but by this time most maritime traffic was bypassing the islands, headed for the booming port at Duluth, Minnesota. Outer Island Lighthouse was activated in 1874, and three years later the Lighthouse Board renewed its plea for a light on Sand Island:

In-coming from Duluth the Raspberry Island light is not visible until abreast of Sand Island, and there being no coast-light in this distance of 80 miles, causes much distress and danger to the increasing commerce of the west end of Lake Superior. An appropriation of $18,000 for the building of this station is recommended.

Congress finally funded the lighthouse in 1880, and work on the island commenced on June 6, 1880, under the supervision of Louis Charles Lederle. The plans for the lighthouse, a Norman Gothic design consisting of a tower rising from one corner of a one-and-a-half-story keepers dwelling, had been used elsewhere in the Great Lakes  Chambers Island and Eagle Bluff (1868), McGulpins Point (1869), Eagle Harbor and St. Clair Flats Canal (1871), and White River (1875)  but this would been the first time that sandstone was used for constructing the dwelling and tower rather than brick.

By the end of the 1880, working season, all needed materials had been landed, shanties for the workers had been erected, and protection cribs were sunk in eight feet of water to form a make-shift harbor.

On July 2, 1881, the Bayfield County Press noted the ongoing work on Sand Island.

Supt. Lederle has cleared about ten acres of ground and opened a fine quarry of red sandstone, which will be used for the government buildings. The Light House proper will be thirty-eight by twenty-eight feet in size, and the light will be placed about fifty feet above the water level.

Bob Mackreth, a former park ranger in the Apostles Islands, noted: No structure could have a more profound connection to its environment than the exquisite little lighthouse on Sand Island, constructed from the same stone as the promontory on which it sits. It is as if the builders simply reshaped the fabric of the island into lighthouse form.

The dwellings gables feature gingerbread ornaments, and the tower transforms from a square in its lower half to an octagon in its upper half. A fourth-order, Henry-Lepaute Fresnel lens was installed atop the forty-two-foot tower and commenced showing a fixed white light on September 25, 1881.

Sand Island Lighthouse only had two head keepers during the forty years it was staffed: Charles Lederle (1881  1891), who stayed on after supervising the construction of the station, and Emmanuel Luick (1892  1920), but it would have sixteen assistants, after that position was added in 1902.

On September 12, 1885, the steamer Prussia bound for Duluth caught fire off Sand Island. The crew of ten men and one woman abandoned the 138-foot vessel and took to two lifeboats in high waves and gale-force winds. Keeper Lederlee witnessed the events, rowed the stations small boat out into Lake Superior, and rescued the entire crew. After being sheltered overnight at the lighthouse, the crew was taken to Bayfield the following day. The captain and crew of the Prussia later sent a letter to Keeper Lederlee thanking him for going to the rescue of the yawl boats and crew who otherwise would most likely have been lost.

Emmanuel Luick witnessed the end of another vessel, the 373-foot, iron-ore carrier Sevona, on September 2, 1905, but he was unable to assist its crew. The steamer struck a reef off Sand Island and shortly thereafter broke in two. Those on the aft half of the vessel took to two lifeboats and made it to shore, but the captain and six other men on the forward portion had no boat in which to escape. In desperation, they constructed a crude raft, but it was torn apart by mountainous waves, and all drowned. Sam Fifield used the hatch covers from the wreck to build Sevona Memorial Cottage, which still stands on Sand Island today.

The following is Keeper Luicks account of the wreck of the Sevona:

Sept. 2. At 5:45 am a steamer whistled a distress, not visible, but for fog and heavy raining. We were unable to see or tell where the steamer was, only knew she was NE of the station. At 10 am, it clear up some so we could see a steamer drifting in/out the East side of the station where she soon struck bottom. We could see no life on board or see any distress signal. We patrolled the beach from 10 to 12 but found nothing.

Ella Gertrude Richardson, who had been working as a newspaper correspondent, was only sixteen when she married twenty-nine-year-old Emmanuel Luick in Rhode Island in 1886. Emmanuel entered the Lighthouse Service in 1889 as an assistant keeper at Outer Island and was promoted to head keeper at Sand Island three years later. Ella kept the stations log for her husband on Sand Island and also served as his assistant from October 1903 to May 1905, when she abruptly left the island and her husband for good.

Here is a sampling of the stations logbook entries (all but one by Ella):

November 23, 1898: This forenoon Mr. Luick went to the boat house and brought home from the shanties a pair of skees, belonging to Mr. Louis Moe. He made a poor Norwegian though, but after practicing awhile he decided that he could manage them. So he put our four chickens in a bushel basket, and the basket in a bag, and the skees on his feet, and with the bag on his back he started for East Bay. He got home three hours later and says skees are better than walking in 18 of snow, but not as easy as snow shoes. In the evening he worked at making a hand sled. I havent anything whatever to do and time goes slowly.

July 4, 1899: After attending to the lamps and the housework Ella and I proceeded to celebrate by firing off some fire crackers and torpedoes and having as good a time as possible. The best however is a very poor imitation of a fourth.

September 18, 1900: Nothing happened until about one oclock this afternoon when as I was sewing at the machine I run the needle through the end of my second finger on my left hand tearing about half the nail off and cutting my finger in two places. It was not very painful, but I fainted twice from nervousness.

October 15, 1900: A hawk stole one of my young pullets this afternoon.

October 16, 1900: About ten oclock I went out to see if all was right. Not a chicken was in sight, but there in the duck yard was Mr. Hawk feasting on one of my nice fat ducks. He has a very dainty appetite and chicken was not delicate enough. I came in and got the gun. I was very careful to pick out the lightest load I could find, for I was afraid the gun would kick. Going carefully back I got within ten yards of him and fired - and hit him. I was very much surprised, as it is the first time I ever shot at anything.

After Ella left in 1905, Keeper Luick went through a string of thirteen assistants over the next sixteen years. Luick married Oramill Buck in 1911, and they had four children during their days at Sand Island. Luicks second wife never served as his assistant.

My only neighbors were the wives of fishermen, remembered Oramill Luick. But we stuck together. We organized a sewing circle and we sewed for the Red Cross and other things. We met twice a month at each others houses, and got up nice little parties, besides. We made much of our birthdays, and baked birthday cakes, and made most of everything we had.

In 1902, a crib, sixteen feet wide, thirty-two feet long, and seven feet high, was placed near the shoreline, filled with stones, and connected to the landing wharf by a twenty-five-foot-long log bridge. A sixteen-foot-long walk was also built, leading from the crib to the top of the bluff, and a brick oil house was constructed near the stations outhouse.

On April 23, 1921, an acetylene gas apparatus started emitting a white flash every ten seconds from the lantern room, and Sand Island became the first lighthouse in the Apostle Islands to be automated. Keepers at Raspberry Island subsequently kept an eye on the light. A forty-eight-foot, steel, skeletal tower was erected near Sand Island Lighthouse in 1933, and the light was transferred to it.

Gertrude Wellisch, a Minnesota school teacher, leased the lighthouse from 1925 to 1942, and John B. Chapple, editor of the Ashland Daily Press, was a tenant after Wellisch moved out. By the time A.D. Hulings obtained a lease for the lighthouse in 1953, the interior of the structure was in poor condition. Hulings put in new floors and installed plasterboards on the walls and ceilings. Sand Island Lighthouse fell under control of the National Park Service after the Apostle Islands National Lakeshore was created in 1970, but Hulings kept his lease until 1975.

Over the years, the Park Service has performed needed renovations of the lighthouse, which houses volunteers during the summer to welcome visitors. The Coast Guard removed the steel tower in 1985 and returned the light to the lighthouses lantern room.

For a larger map of Sand Island Lighthouse, click the lighthouse in the above map.

The lighthouse is owned by the National Park Service. Grounds open, dwelling/tower open in season.