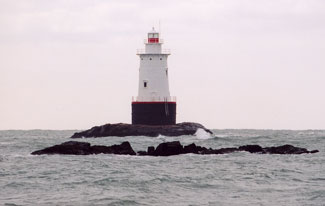 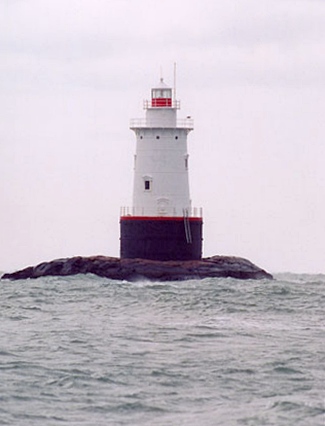 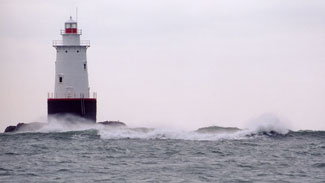 Congress approved $20,000 in 1882 for a lighthouse on Little Cormorant Rock at the entrance to the Sakonnet River, 800 yards off Rhode Islands Sakonnet Point. Construction began in early 1883. After a break at the end of the year due to harsh winter weather, work resumed the following spring, and the beacon was lighted on November 1, 1884.

Sakonnet Lighthouse is a cylindrical, cast-iron tower that sits atop a cast-iron, concrete-filled caisson foundation. Situated beneath the lantern room, the top deck of the tower functions as a watchroom, while the four lower decks serve as living quarters and storage. The first beacon was a Sautter fourth-order Fresnel lens that produced a fixed white light for thirty seconds, followed by thirty seconds during which three equally spaced red flashes were seen. The lens was rotated by a clockwork mechanism, powered by weights that dropped through a central tube and had to be rewound every three-and-a-half hours. In 1891, the light was changed to a kerosene-powered lamp, and the following year, fourteen steps, seven on the east side and seven on the west side, were carved into the rock to aid boat landings.

Sakonnet Lighthouse wasnt the easiest duty for a keeper. Lucius E. Chadwick battled a constant series of steep swells as he struggled to row his small boat 800 yards in the bitter January cold to his new post. The cramped accommodations in the tower were not to his liking, and after climbing the wooden staircase to the lantern room, he looked out at the ice-cold waters and promptly returned to land and resigned the appointment that he had accepted just two days previously.

While the keepers did not always appreciate the lighthouse, it was definitely appreciated by mariners relying on the beacon in foul weather. The following poem by Lydia Avery Coonley, published in The New England Magazine of August 1897, captures the importance of the lighthouse.

Our boat is out upon the sea;
The winds blow soft, the sails are free;
Her white bow tosses diamond spray
Upon the swell that glides away.
Across a royal road the sun
into the west his course doth run;
Far out, a boat with shining sail
Calls to the sun farewell and hail;
The waves shake out their flags of white
And evening signals to the night.
The billows strong and stronger grow,
The white keel beats them into snow;
We rise upon the seas high crest
And dip into her deep curved breast.
The lighthouse, like a soldier dressed,
Looks out into the glowing west,
With shining helmet, coat of mail
By day, by night, he greets each sail,
And, Hail, Sakonnet! each replies
Across the waves, neath arching skies.
If on these rocks you did not stand,
Death signs would mark the peaceful strand.
So hail! bright beacon of the night,
Hail, and thrice hail, Sakonnet Light!

Getting to and from the lighthouse was often difficult and sometimes impossible due to the heavy seas. The tower was cold and damp during winter. A violent storm in August 1924 swept the stations boats away, damaged the boat dock, and broke the windows in the tower. William Durfee, the keeper on duty at the time, saw waves breaking on the main galleys roof, and spray easily reaching above the top of the lantern room, seventy-five feet above sea level. The force of the waves shook the station to its foundation.

Nils Nelson, an assistant keeper at Sakonnet Lighthouse, received a gold lifesaving medal for rescuing a man from drowning on nearby West Island on July 24, 1903. The details of the rescue were detailed by the Coast Guard:

It appears that on the afternoon of the day above named, George H. Child, an employee of the West Island Club, was sent in a gasoline whaleboat to the Sakonnet Point steamboat landing for the club mail. Though a heavy sea was running he experienced little difficulty in reaching the landing and obtaining the mail, but on his return, and when near to the Sakonnet light-house, an immense wave boarded the boat, swamped it, and dashed it to pieces against the rocks. Child swam to a rock and managed, by lying flat and clinging to the crevices, to prevent himself from being swept away by the angry seas. Two boats were sent from the clubhouse to his rescue, but, being unable to get anywhere near the rock, because of the heavy sea breaking on the underlying rocks, gave up the attempt.

The man had now been clinging to the rock for more than half an hour, and was in imminent danger of being washed off and drowned, when Nils Nelson, assisted by the light keeper, launched the lighthouse supply boat, and, while the keeper remained at the light-house and directed him by signals, Nelson manned the boat and with great difficulty pulled clear of the jagged rocks to the vicinity of the imperiled man. He then told Child to throw himself toward the boat when the next wave passed and that he would take him in. Fortunately this plan succeeded, Child reaching the boat, which was carried by the wave completely over the reef into a sheltered spot of much smoother water, and, a few minutes later, both men landed safely on the island.

The evidence and circumstances show that, beyond all question, Mr. Child would have perished but for the gallant action, at the peril of his life, of Nils Nelson.

Just a few years later, while serving at the lighthouse on New Haven Breakwater, Nils Nelson slit his own throat in January 1908.

Like many lighthouses in New England, Sakonnet Lighthouse was damaged during the great hurricane of September 1938. Over seventy homes on Sakonnet Point were destroyed, and thirteen lives lost. Four men tried to escape the rising water by perching on the roof of a two-story home. The wind lifted the entire roof off the house and dropped the four men into the water near the lighthouse. Fortunately, all four survived as a boat was able to pick them up before they were carried out to sea.

The lighthouse also somehow survived the hurricane, but a large crack was later found in the towers base. The Coast Guard made the necessary repairs, including replacing the beacon with an incandescent vapor lamp, again powered by kerosene. A foghorn was also installed at that time.

In 1954, Hurricane Carol severely damaged Sakonnet Lighthouse. The estimated cost of tearing the structure down and rebuilding it was $100,000. The Coast Guard decided the repairs were too expensive, and the station was deactivated the following year. The Coast Guard planned to blow the tower up, but the citizens of Little Compton objected and fought for its preservation. Ownership of the light was transferred to Little Compton with the proviso that the station was maintained and left permanently unlighted.

In April 1961, the taxpayers of Little Compton rejected a proposal to maintain the lighthouse as a historical monument, and the following August, the government invited bids for the discontinued lighthouse with two restrictions: that no light be exhibited from the towers lantern room and that any salvage operations at the site be directed by the Armys Corps of Engineers. Carl and Carolyn Haffenreffers bid of $1,111 was enough to win them a lighthouse. The couple maintained the tower for several years and then in 1985 offered to donate the lighthouse to any nonprofit group that could raise the estimated $75,000 needed to renovate and restore the station. The Friends of Sakonnet Lighthouse was formed in response, and in a little more than a year was able to raise $100,000.

The lighthouse has since been fully and beautifully restored, although it is not open to the public. Sakonnet is one of about thirty surviving spark plug lighthouses, so called because of their appearance. (Most of the spark plugs were built before the gasoline engine came into common use, and so were originally referred to as coffee pots or sometimes bug lights.) The sparkplug lights were typically prefabricated on shore, barged to the site, and put into place with floating cranes. They are usually located offshore, and most of them are found in the Northeastern and mid-Atlantic states.

After the station was restored, the Coast Guard made an offer to reactivate Sakonnet Lighthouse, but as owners of the light, the Friends of Sakonnet Lighthouse had concerns about possible liability should a shipwreck occur near the lighthouse. Eventually these issues were resolved, and on March 19, 1997 Sakonnet Lighthouse was relighted as an active aid to navigation during a ceremony that attracted several hundred people.

In 2007, a campaign was launched by the Friends of Sakonnet Lighthouse to raise funds to refurbish the lighthouse, which is listed on the National Register of Historic Places. The Friends obtained an $844,323 grant from the Rhode Island Department of Transportation in 2009 and coupled this with nearly $200,000 they had raised to start the restoration. The project was put out to bid in early March 2010, and a few weeks later a contract was awarded to the Joseph Gnazzo Company of Union, Connecticut, which specializes in restoration of seaside structures.

An inspection of the tower made a few years earlier revealed that the bolts holding the towers large cast-iron plates together were starting to fail. In June 2010, a three-level platform was constructed on the rock adjacent to the lighthouse to support a crane and needed equipment, and scaffolding was put in place around the tower. Starting at the top and working down, a crew of from seven to ten workers sandblasted the plates to remove rust and replaced the old bolts with new stainless steel ones. The required work was estimated to take just ninety days, but unexpected weather interruptions spread the project out over roughly five months. Before the restoration work was finished, Friends of Sakonnet Lighthouse launched a fundraising campaign to cover future maintenance costs.

Located just offshore from Sakonnet, on the eastern side of the entrance to the Sakonnet River from Rhode Island Sound.
Latitude: 41.45317, Longitude: -71.20247

For a larger map of Sakonnet Lighthouse, click the lighthouse in the above map.

From the junction of Highways 24 and 77 south of Fall River, go south on Highway 77 for fourteen miles to Sakonnet, from where you can see the lighthouse.

A portion of the fourth-order Fresnel lens from the Sakonnet Lighthouse is on display at the Maine Lighthouse Museum in Rockland, Maine.

The lighthouse is owned by Friends of Sakonnet Lighthouse, Inc. Tower closed.