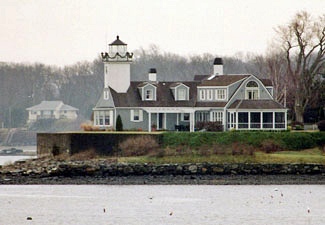 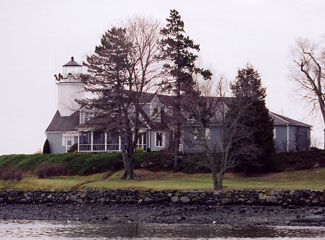 Poplar Point Lighthouse is an excellent example of an integral lighthouse  that is one in which the light tower is incorporated into the keepers living quarters. Integral lighthouses were appealing as they cost little more to build than a regular house, but the keepers dwelling was also more susceptible to fire, being attached to the tower. The earliest integral lighthouse in the United States was built in Plymouth, Massachusetts in 1769.

On March 3, 1831, Congress approved $3,000 for a navigational beacon at Wickford Harbor, and Poplar Point, at the southern entrance to the harbor, was selected as the site for the lighthouse. Three acres of land were purchased from Thomas Albro for $300, Charles Allen of Kingston, Rhode Island was hired to build the lighthouse for $1,889, and Winslow Lewis was contracted to supply the lamps and reflectors for $375.

The octagonal tower was built of wood and attached to the eastern gable of a one-story, rubblestone keepers dwelling. Access to the tower, whose interior was initially left unfinished with its studs exposed, was through a small, windowless bedroom, which during the winter, was unlivable as its unlined walls freely admitted cold and snow.

Poplar Points first keeper was Samuel Thomas, Jr., who received his appointment in November of 1831 at an annual salary of $350. Lieutenant George M. Bache included the following details on Poplar Point Lighthouse in an 1838 report:

The light is shown from a wooden tower placed over the keepers dwelling and is elevated forty-eight feet above high-water mark.

The lighting apparatus consists of eight lamps with concave reflectors, so disposed around two circular rims or hoops as to throw their light over the portion of the bay and harbor included between the S.E. by E. and N.W. by W. points.

The lamps are in good order. The reflectors average in weight nearly three pounds; their diameters are 14 1/2 inches. A portion of the silver has been rubbed from their concave surface at the upper hole, through which the glass tube should pass; they are otherwise in good condition.

The dwelling-house, of stone, built in 1831, is in good repair, and the establishment appears to be well kept.

It seems Poplar Point Lighthouse did little to help vessels coming through Narragansett Bays West Passage, as it was located within a shallow bay, two miles from the middle of the channel. The lighthouse did, however, serve as an entrance light for Wickford Harbor, but few ships would attempt to enter Wickford Harbor after dark, instead waiting for daylight at the well-protected anchorage between Dutch and Conanicut Islands.

A sixth-order steamer lens and single Argand lamp replaced the array of eight lamps and reflectors in 1855, but still showed a fixed white light. In 1870, the inside of the tower was finally finished, a dormer window was installed in the attached bedroom, a partition was put in place to separate the bedroom from the tower, and a new lantern with an iron deck was installed atop the tower.

After Poplar Point was discontinued, the land and buildings were sold at auction to Albert R. Sherman of Pawtuxet, Rhode Island for $4,000 on October 15, 1894. Two wings have been added to the lighthouse, creating a rambling structure laid out in the shape of a Y. The exterior of the stone keepers dwelling is now covered in shingles, and a large bow window has been placed on the north gable of the lighthouse to provide a commanding view of Wickford Harbor from the first floor.

The property has been resold a number of times over the years, and has been used as both a summer home and a year-round residence. A plaque embedded in a stone in the middle of the driveway tells of the role Poplar Point played in the Revolutionary War, long before the construction of its lighthouse: On this point during the Revolution stood a cannon protecting Updikes Newton now Wickford against enemy excursions on the main. It was manned by the Newton rangers, whose charter was granted April 17, 1777.

In 2011, the lighthouse residence, which includes a swimming pool, was on the market for $6.45 million.

Located on Poplar Point, at the southern side of the entrance to Wickford Harbor from Narragansett Bay.
Latitude: 41.57107, Longitude: -71.43915

For a larger map of Poplar Point Lighthouse, click the lighthouse in the above map.

The lighthouse is best viewed from the water or from across the mouth of the harbor on the breakwater at Sauga Point. Rhode Island Bay Cruises offers a 10 Lighthouses of Narragansett Bay cruise that passes Poplar Point Lighthouse. Save the Bay offers lighthouse cruises that pass the lighthouse.