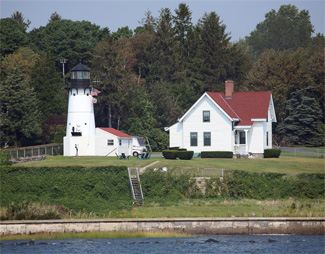 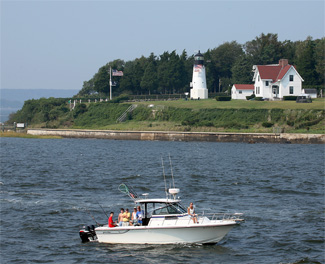 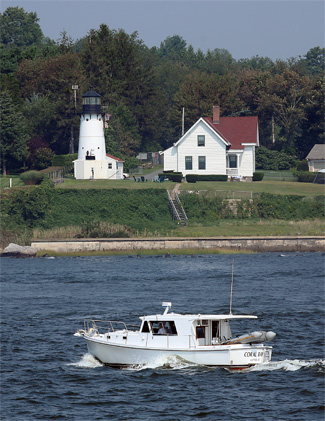 The first lighthouse at Warwick (sometimes known as Warwick Neck or Warwick Point Lighthouse) was completed on the southern tip of Warwick Neck in 1826, after Congress had provided $3,000 for its construction. Three acres for the station were purchased from the Green family on May 15, 1826. The stone tower stood thirty feet tall with a small, 120-square-foot stone house attached and was described as an odd-looking structure, more like a windmill than a lighthouse. In 1833, a three-room wooden addition was added to the keepers dwelling. Two years later, a lime and pebble covering was applied to the structure. The original beacon was a collection of eight lamps and nine-inch reflectors arranged around three-fourths of the circumference of a circular table. In July 1831, Daniel Waite arrived at Warwick Lighthouse to begin his first day of duty, only to find that Elisha Case, the man he was replacing, refused to leave. Case, the lights first keeper, wanted assurance from the government that he would be able to care for and harvest some crops he had already planted at the station. Case also demanded compensation for a barn he had put up on the grounds. In the early days of American lighthouses, facilities for horses and other farm animals were usually not provided, leaving the keepers to build any extra buildings they needed. The federal government allowed this practice, but also insisted that the keepers be responsible for the removal of any such technically unauthorized buildings. Elisha Case was allowed to come back and harvest his crops, but he received no money for his barn.

Keeper Waite died in November 1832, during his second year of service, but his wife Abby took charge of the light and remained on the point for several more years.

A fourth-order Fresnel lens was installed in the lantern room on Warwick Neck in 1856. In 1889, a one-and-a-half-story, wood-framed house was built, which still stands today, and a couple years later the addition was moved away from the tower and converted into a barn.

Keepers at Warwick Lighthouse were treated to an excellent view of Narragansett Bay. Vessels traveling to and from Providence, Rhode Island could use the east channel or west channel when passing through Narragansett Bay, and Warwick Lighthouse marks the western channels northern entrance, which is three-quarters of a mile wide and defined by Warwick Point and the northwest tip of Patience Island.

After Warwick Light was established, mariners were given new instructions to follow after passing Dutch Island Lighthouse: Steer N. E. 14 miles, for the light to Warwick Neck, leaving it on the larboard (left) hand one-quarter of a mile, where you anchor in 3 fathoms of water. This was followed by warnings that the channel from that point was only marked with wooden stakes, and not to proceed without a pilot with local knowledge. Even though a lighthouse was established at nearby Nayatt Point two years later, it was another half century before the busy Providence River channel was well marked.

In 1890, not long after the new keepers dwelling was built, the Lighthouse Board noted another new structure was needed on the point: A steam fog-signal in duplicate is needed here. It can be established at an estimated cost of $5,000. After many requests, funds were finally approved for a fog signal, and a blower siren was established at the station on June 1, 1900. The siren was powered by a two-and-a-half-horsepower engine and sounded a continuous blast during thick weather. The signals characteristic was changed in June 1901 from a continuous blast to three-second blasts separated by three seconds of silence. The siren replaced a fog bell that was placed in operation on the point in 1882.

By the early 1930s, erosion had put Warwick Lighthouse in danger of falling into the sea, and in 1932 a new tower was built farther inland. The old tower was left standing until the new thirty-one-foot steel tower was completed in June 1932. An electric lamp was used inside the fourth-order Fresnel lens in the new tower rather than an incandescent-oil-vapor lamp, and a new electric fog signal was installed. These changes reduced the stations workload, and when Assistant Keeper Edward Murphy was promoted to head keeper in 1933, the position of assistant keeper was eliminated.

Just six years after the new metal tower was erected, the New England Hurricane of 1938 tore another big chunk out of the bank. The storm left the tower just inches from falling into the water. The following year, a series of massive jacks lifted the thirty-five ton tower and moved it fifty feet farther inland to its present location. It was placed on an eight-foot-tall concrete base so that ships could see its beacon over the top of the keepers house. The move only took one day, and the light continued to shine during the relocation. The previous entrance door in the tower was sealed up, as access was now through the concrete base.

In a 1986 interview, May Bakken Chrietzberg shared her memories of the original lighthouse that was torn down in 1932. She was born in the house next to the old tower shortly after her father, Jorgen Bakken, was transferred to duty at Warwick from New Yorks Shinnecock Lighthouse. Bakken remained keeper at Warwick for twenty years. May Bakken was an eyewitness to the building of the new tower, the transfer of the Fresnel lens, and the destruction of the old lighthouse. It still saddens me to speak of it in the past tense, she wrote much later. May recalled that her father received several commendations, including one from President Herbert Hoover, for rescues performed at Warwick Neck. One of these rescues occurred in 1922 when Keeper Bakken saved two men who were clinging to their capsized canoe. Many rescues went unrecognized, but that didnt bother Bakken as he considered them merely part of his job.

During Prohibition, lighthouse keepers also had the unofficial duty of keeping an eye out for bootleggers. May Bakken recalled lying awake at night as a child with her sister Madeline and listening to the sounds of Coast Guard boats trying to catch rum-runners on Narragansett Bay. At some point, the notorious Redich gang was caught at their hideout  a nearby estate that had a hidden passage along the shoreline that illegal boats used to enter the property.

In 1985, a modern lens replaced the towers Fresnel lens, and Warwick Lighthouse became automated. The station is listed in the National Register of Historic Places. The lighthouse is owned by the Coast Guard and continues to be an active aid to navigation, showing a flashing green light. The keepers dwelling is still used as housing for Coast Guard personnel.

For a larger map of Warwick Lighthouse, click the lighthouse in the above map.

The best views of the lighthouse come from the water, but partial views can be had from the street near the lighthouse. From Highway 117 in Warwick, turn south on Warwick Neck Avenue and follow it for 2.6 miles to its end, where you will see the light.

The light station is owned by the Coast Guard. Grounds/dwelling/tower closed.