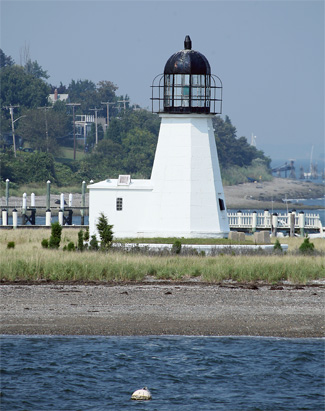 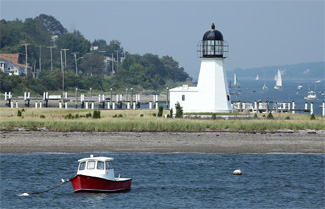 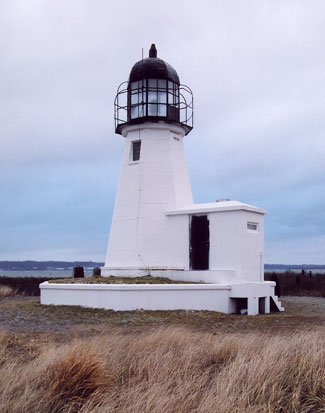 Known to local natives as Chibacoweda, meaning little place separated by a passage, Prudence Island lies just over a mile offshore in the upper reaches of Narragansett Bay. Roger Williams and Governor John Winthrop purchased Prudence Island from Sachem Canonicut for twenty fathom of wampum (a fathom is six feet) and two coats in 1637. Williams soon thereafter purchased two smaller islands nearby, and continuing a list of virtues, he named them Hope and Patience. Life must not have been exactly perfect, for a tiny island off Hope Island is named Despair. The thirty-foot-tall octagonal granite tower at Prudence Island is the oldest lighthouse in Rhode Island and one of the few lighthouses in the country to retain a birdcage lantern. On September 28, 1850, Congress appropriated $3,500 for a lighthouse on Prudence Island. Rather than build a new tower, the local lighthouse superintendent recommended that the old Goat Island Lighthouse, built in 1823 and discontinued in 1842, be moved to Sandy Point on the east side of Prudence Island. Horace Vaughn was accordingly awarded a $900 contract in October 1851 to dismantle the old tower and reassemble it atop a circular stone pier on Sandy Point. Vaughn wisely numbered the granite blocks as he took down the tower so it could be reconstructed in the same manner. After I.N. Stanley and Brother, an iron foundry in Newport, installed the deck and lantern room, Prudence Island Lighthouse was placed in operation on January 17, 1852.

A dwelling for the keeper was built about 190 feet west of the tower. The structure had six rooms, with a kitchen attached to its north side. As low-lying Sandy Point was prone to flooding during storms, an elevated plank walkway linked the dwelling to the tower.

Prudence Island Lighthouses original Winslow Lewis light apparatus, consisting of six lamps and an equal number of fourteen-inch reflectors, was replaced in 1855 by a fifth-order Fresnel lens that also produced a fixed white light. On August 10, 1884, a fog bell, tolled by an automatic striking mechanism, was established at the station. In 1924, the lights characteristic was changed to flashing white, with a weight-activated rotating mechanism.

A newspaper story in March 1856 noted that a two-and-a-half-pound wild duck had dashed through the lantern room glass on Prudence Island, furnishing Keeper Edward Spooner with Sunday dinner. Spooner was the third keeper of the lighthouse, arriving in 1855 after short terms of service by Peleg Sherman, the first keeper, and Henry Dimond.

The one-acre lighthouse grounds stood entirely on beach sand. Over the years, various keepers were allowed to keep a garden and some farm animals on land owned by neighbor Lewis Herreshoff. A rift developed at one point between Herreshoff and Keeper Thompson when some of the neighbors cattle wandered into the keepers garden and ate all the vegetables. The keeper threw stones at the beasts to frighten them away, and one of them was badly injured, later dying. Herreshoff asked that the keeper put a fence around his garden, but Thompson, who had a wife and four children, said he couldnt afford such an expense. The government purchased the one-and-a-quarter-acre garden plot in 1907 for $450, and a fence was erected around it to prevent future incursions.

On September 21, 1938, seventy-one year old Martin Thompson watched from the lighthouse dwelling as the winds picked up and the swells grew in the channel between Prudence Island and the mainland. Thompson, a former Keeper at Prudence Island who had twice been awarded the efficiency flag for having the model station in the district, owned a cottage near the lighthouse, but felt the keepers dwelling was the place to be in a storm. Two other guests, a James and Ellen Lynch, were also staying at the lighthouse with Keeper George T. Gustavus and his wife and son. Retired Keeper Thompson had seen a lot of powerful storms in his twenty years of service, but this one would top them all.

At some point, a tidal wave generated by the storm moved up Narragansett Bay, devouring everything in its path. The keepers house was smashed to pieces in an instant, although the stone lighthouse tower remained standing. The condition of the tower after the hurricane can be seen in the photograph at right. Keeper Gustavus happened to catch a wave going in the right direction and was pulled to safety by an island resident standing on the shore. Horrified onlookers watched as the keepers wife and son were swept away, holding on to a piece of the dwelling. The three lighthouse guests were nowhere to be seen, but their bodies were found washed up on the island about a week later. The body of Keeper Gustavus wife Mabel was later found on a beach near Newport, while the body of his thirteen-year-old son Edward was never recovered. Altogether, five lives were lost that day at the lighthouse, and an additional three people on Prudence Island perished. Two of the Gustavus children had taken the ferry to school that day and were unable to return to the island, while the other seven Gustav were grown and had left home.

Throughout Rhode Island, about 400 people were killed by the hurricane, including the keeper at the cast-iron Whale Rock Lighthouse at the entrance to Narragansett Bay, which was completely washed away.

Immediately after the hurricane, Milton Chase, general manager of the Homestead Utility Company, ran a cable to the damaged tower at Prudence Island and installed an electric light as an emergency temporary navigational aid. Chase received a letter of commendation for his prompt action.

The keepers dwelling was not rebuilt after the hurricane. Rather, the light was electrified the following year, and the revolving lens was replaced by a fixed, fourth-order lens, further simplifying the task of caring for the light. A few island residents looked after the light until it was automated in 1961. At that time, a diaphragm horn was mounted on the lantern rooms deck to replace the stations fog bell.

In an interview years later, George Gustavus said that his family and houseguests were caught like rats in a trap in the face of the record-high seas and winds. We all rushed up the stairs, [but] when the house broke up we were thrown in the rushing water, Gustavus said. Keeper Gustavus had joined the Lighthouse Service in 1910, serving at Tarpaulin Cove Light on Naushon Island, Nobska Point, Eastern Point, Thatcher Island off Cape Ann, Cuttyhunk Island, Bird Island, and Dumpling Rock (all in Massachusetts), before arriving at Prudence Island in 1937. After the hurricane and the death of his wife and son, Gustavus resumed his career in 1939, becoming keeper at Nobska Light on Cape Cod. Keeper Gustavus joined the Coast Guard and remarried in 1943. He finished his career at Chatham Lighthouse, retiring in 1945.

Prudence Island Lighthouse remains an active aid to navigation, with a modern beacon producing a green flash every six seconds. In 2000, the Coast Guard gave the American Lighthouse Foundation a twenty-year contract to take care of the light, however, after vociferous protests, the caretaker contract was transferred to a local group, the Prudence Island Conservancy, in August 2001. Conservancy members repaired the towers foundation and applied a new coat of paint in 2002.

In July 2020, the General Services Administration announced that Prudence Island Lighthouse was excess to the needs of the Coast Guard and was available for transer at no cost to eligible entities defined as federal agencies, state and local agencies, non-profit corporations, educational agencies or community development organizations under the National Historic Lighthouse Preservation Act of 2000. Letters of interest were due within sixty days. If it is not transferred to a public body or non-profit organization, the lighthouse will be sold at auction.

For a larger map of Prudence Island Lighthouse, click the lighthouse in the above map.

Prudence island can be reached via the Bristol - Prudence Island Ferry. Call (401) 683-0430 for the ferry schedule. From the ferry landing on Prudence Island, go south on Narragansett Avenue for just under a mile then turn left onto Landing Lane, where you will find the lighthouse. A distant view of the lighthouse can be had from across the bay near the Green Animals Topiary Gardens.

The lighthouse is owned by the Coast Guard and leased to Prudence Conservancy. Grounds open, tower closed.