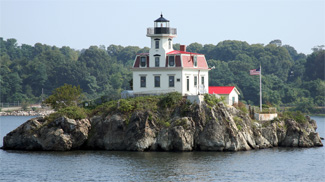 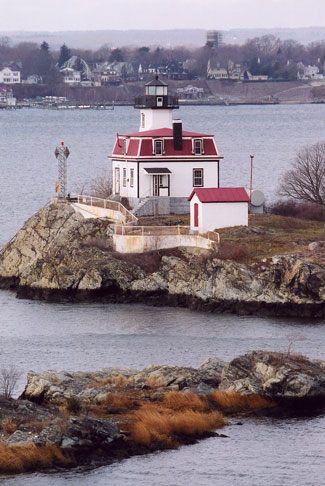 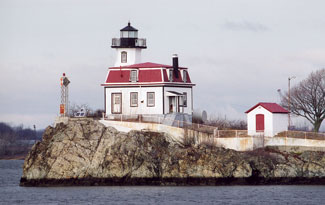 Pomham Rocks Lighthouse is located on a large rock on the east side of the Providence River, just three miles from downtown Providence. The square, two-story, wood-framed keepers residence is topped by a short tower that rises from the west side of dwellings mansard roof. The seven-room lighthouse is very similar in design to others built in the same era, including the now-gone Sabin Point Lighthouse in Rhode Island as well as Vermonts Colchester Reef Lighthouse. The corners of the square tower are beveled, making it appear to be almost hexagonal, and the window frames on the upper story have Victorian-influenced scrolling. The lantern room was reached by a wooden stepladder in the second-floor watch room. The small, separate stone building also found on the rock is the stations 1900 oil house. Pomham Rocks, also known as Pumham Rocks, are named after a Narragansett Indian sachem and consist of two rocky islets connected at low water by a bar. The rock on which the lighthouse stands reportedly boasts two profiles, one of which resembles the Old Man of the Mountain in Vermont.

An unlighted daybeacon in the form of a stone tower, surmounted by a vane and black ball, served to mark Pomham Rocks until Congress provided $20,000 on July 15, 1870 for three lights in the Providence River, including one on the westernmost islet at Pomham Rocks.

The forty-foot-tall Pomham Rocks Lighthouse went into operation on December 1, 1871 with a sixth-order Fresnel lens showing a fixed white light at a height of sixty-nine feet above the water. On October 1, 1872, the characteristic of the light was changed from fixed white to fixed red. A wharf and boathouse were added to the station in 1873 after Congress provided $1,200 for the work earlier that year.

The first keeper was C.H. Salisbury, who was in charge of the light for twenty-two years. Mrs. Salisbury was made assistant keeper in November 1872, but the appointment was revoked the following month. When her husband died in May 1893, Mary Salisbury was appointed acting keeper, but she resigned before the end of the year.

Although Pomham Rocks Lighthouse was less than a mile from shore, it had few of the comforts and amenities that mainland residents already took for granted at that time. There was no electricity, telephone, or running water at the station. The only light came from oil lamps, and for water, rain was collected from the roof and stored in a brick and concrete cistern. When Keeper William J. Howard retired in 1951 after fourteen years at Pomham Rocks, which he called his Little Alcatraz, he said there were three things the station lacked that he looked forward to enjoying: electricity, running water, and a bathtub. The Coast Guard finally brought electric power to the lighthouse in the 1956.

The short trip from the lighthouse to shore was difficult at times. In the middle of the winter, the river was frozen solid and the trip could easily be made on foot. At other times, the ice was too thin to walk on, so the keeper had to get into his small rowboat and laboriously cut his way through the ice.

In June 1900, a blower siren that emitted a continuous blast during limited visibility using a two-and-a-half horsepower oil engine and a trumpet was installed at the station. The noise was extremely bothersome to nearby residents, and a local newspaper ran a headline reading, THE GREATEST NUISANCE IN THE HISTORY OF THE STATE. The text of the article said that the signal had a sound to make the flesh creep, indescribably lonesome and cheerless, creepy and dreary. Besides the annoyance it caused the sleep-deprived locals, many ship captains and pilots felt that the signals uninterrupted blast was not that useful in fog. Others voiced resentment at what they considered unnecessary control by remote bureaucrats in the nations capital. One man was quoted as saying ,It beats the dutch how that Light House Board, sitting in Washington, and considered the fattest snap [with the most influence] in the navy, can tell what is best for the mariners and residents of Narragansett Bay, better than they can tell themselves.

Some urged installation of a fog bell as a replacement, but since a bell was already in place at nearby Sabine Point Lighthouse, it was feared a second bell would confuse mariners. On June 15, 1901, the characteristic of the Pomham fog siren was changed to a three-second interval followed by twelve seconds of silence. Those complaining should have been thankful that the fog signal at Pomham Rocks was used much, much less that the fog signals in the state located closer to the ocean. During the twelve-month period ending June 30, 1901, the siren at Pomham Rocks was in use just seventy-nine hours. A fog bell replaced the siren on October 1, 1902, and its melodious tones must have been welcomed by those nearby.

Adolf Aronson had the longest tenure at Pomham Rocks, serving from 1908 to 1937. Keeper Aronson began his career aboard the Hog Shoal Lightship in 1899, and then became assistant keeper of Hog Island Shoal Lighthouse when it replaced the lightship in 1901. Aronson was promoted to head keeper in 1903 and then transferred to Pomham Rocks in 1908.

When Keeper Adolph Aronsons daughter Marjorie had appendicitis, she was too ill to be moved in a small boat, so the doctor and his staff came out to the station and performed the emergency surgery right in the lighthouse. Typical leisure time for the Aronsons included reading and playing the piano. The piano had been brought to the station aboard a schooner  suspended above the ships deck, using lines tied between the two masts. When the ship pulled up next to Pomham Rocks, the crew all stepped to one side of the boat, and it tipped far enough over to lower the piano to the ground.

Several newspapers throughout the country carried an article in 1931 that told how Keeper Aronsons cat Tommy would perch motionless on a rock and then dive headfirst into the water to catch unsuspecting fish. Tommy didnt appreciate the rivers brackish water and would roll around in the grass to remove it, whereas after a rainstorm, he would lick himself dry. Many people didnt believe the story about Tommys fishing abilities until a local photographer captured pictures of Tommy in action.

When Congress was considering a bill in 1950 that would extend benefits to the widows of lighthouse keepers, Nellie Aronson, whose husband had died a decade earlier, sent a letter to her representative. In it, she explained:

I had to know how to handle a boat in good as well as nasty weather. Shortly after we were married in 1900 I learned that I, too, actively was in the lighthouse service, although I didnt get any money for it. One thing I had to learn was how to take care of the fog signal, which is a large bell struck by machinery  a double blow every 20 seconds. It has to be wound by hand  or did in those days.

I can assure you, sir, that winding a fog signal and winding a clock are entirely different. It was hard work  manual labor. When something went wrong with the machinery, and it often did, Id have to pick up a heavy sledge hammer and ring the bell that way  every 20 seconds.

Nellie Aronson noted that during her husbands thirty-eight years of service he had only ten days leave, though he was on sick leave once for two months after he was hurt in an accident while on an errand of mercy between lighthouse and shore. Keeper Aronsons foot was hurt in the accident and had to be amputated, but he was back on the job as soon as he was able to hobble about. In 1939, the light was upgraded through the installation of a fourth-order lens. This lens was removed in 1974 and is now located at the Custom House Maritime Museum in Newburyport, Massachusetts.

Pomham Rocks Lighthouse was retired in 1974, after being replaced by a twenty-foot-tall skeleton tower that continues to show a fixed red light to mariners. The three coastguardsmen serving there were assigned elsewhere, but the stations two dogs, Pooch-Pooch and Jennifer, remained on the island after being adopted by the Charbonneaus, caretakers that lived at the station under the direction of the Rhode Island Historical Society.

In 1980, the lighthouse and grounds were put up for public auction. The high bid of $40,100 was submitted by the Mobil Oil Company (now Exxon Mobil), which had a terminal nearby. A resident caretaker employed by Mobil lived on site to maintain the historic property, but the lighthouse gradually fell into disrepair.

In 2005, Exxon Mobil leased the structure to the American Lighthouse Foundation so it could be restored by its local chapter, the Friends of Pomham Rocks Lighthouse. The corporation also generously donated $55,000 towards the lighthouses restoration. Abcore Restoration Company, who had recently completed an overhaul of Rhode Islands Plum Beach Lighthouse, was contracted to implement the restoration plans that include installing a new roof, rebuilding the chimney, restoring the siding, and repairing water damage to the framing and rafters. The lighthouse was re-lit in 2006 after the restoration was complete. Several government officials attending the relighting ceremony, where Exxon Mobil announced it would give $75,000 to help fund additional work.

Recognizing the dedicated efforts of the Friends of Pomham Rocks Lighthouse, Exxon Mobil donated the lighthouse to the support group, and a private ceremony to celebrate the transfer was held on April 17, 2010.

For a larger map of Pomham Rocks Lighthouse, click the lighthouse in the above map.

The land on the east side of the Providence River with the best views of the lighthouse is part of the East Providence Pollution Control Facility. We stopped at the facility and received permission to enter the grounds to photograph the lighthouse. To reach the facility, take Highway 103 to Riverside, and then go south on Bullocks Point Avenue. Turn right on Crest Avenue to reach the water treatment plant.

If you would like a nice walk, proceed further south on Bullocks Point Avenue to Washington Avenue. At that intersection, there is a parking lot for the East Bay Bicycle Path. The path is open to walkers as well as bikers and extends from Providence to Bristol. Views of the lighthouse can be had by walking north on the bike path for about a quarter mile. You can also get a fair view of the lighthouse from the Stone Gate Apartments on Bullocks Point Avenue.

Friends of Pomham Rocks Lighthouse started offering boat trips to and tours of the lighthouse in 2020.

A Fresnel lens used in the Pomham Rocks Lighthouse is on display at the Custom House Maritime Museum in Newburyport, Massachusetts.

The lighthouse is owned by the Exxon Mobil Corporation and is leased to the American Lighthouse Foundation. Grounds/dwelling/tower closed.