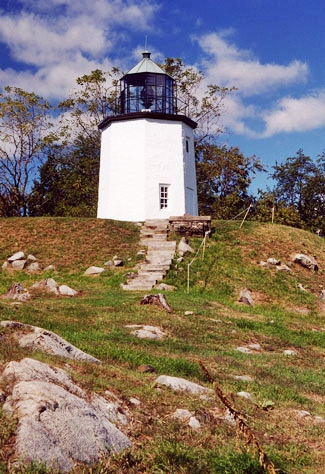 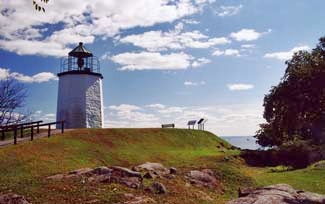 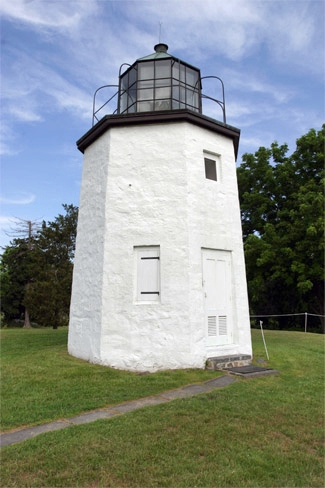 The wind howled through the dark night along the Hudson River on July 15, 1779, when at midnight, American troops, under the command of Mad Anthony Wayne, sprang a surprise attack on the British fort at Stony Point. This last major Revolutionary War battle in the North was victorious for the Americans, and though Washington abandoned the fort just three days later, it was a lasting victory for American morale. In 1826, the first lighthouse on the Hudson River was constructed at historic Stony Point to mark the southern entrance to the Hudson Highlands. The completion of the Erie Canal the previous year, which linked New York City to Americas heartland, increased traffic on the Hudson River dramatically, and the need for navigational aids was paramount.

The thirty-foot-tall octagonal Stony Point Lighthouse, built of blue split stone, was constructed by Thomas Phillips of New York City, at a cost of $3,350.

Keeper Cornelius W. Lansing lit the light for the first time on December 1, 1826. In 1838, Lieutenant George M. Bache provided the following information on Stony Point Lighthouse as part of a report on lighthouses around New York City:

Stony-point light, (stationary,) upon Stony point, on the west bank of the Hudson, is extremely useful to vessels approaching it from below, as it serves to point out a pass on the river which is difficult to be distinguished on account of the uniformity of the high land behind it. It was established in the year 1826; the tower from which it is shown is of stone, and at present is in a very bad condition. The mortar used in its construction has not hardened; the masonry over the cellar window is cracked; the stone lintel over the door is broken, and the timbers over the door-frame, and the beams and rafters of the floors, are very much decayed.

The lighting apparatus consists of seven lamps, with spherical reflectors, of the same construction as those at [Throgs Point] lightand arranged to throw the light across the channel and up and down the river.

The dwelling-house, containing six rooms, is of stone, and requires repairs; the oil is stored in the cellar of the dwelling.

Stone lintels and doors sills were substituted for the wooden ones in the keepers dwelling in 1841. In 1856, a fifth-order Fresnel lens, which also beamed a fixed-white light, replaced the array of lamps and reflectors. A more powerful fourth-order Fresnel lens was installed in 1902.

A wooden fog bell tower was added to the station in 1857, and this served until 1876, when the bell was removed from the decayed tower and suspended from a bracket affixed to the lighthouse. In 1890, another fog bell tower was built, this time 200 yards east of the lighthouse and near the waters edge. In 1902, a lens lantern was mounted on the roof of the bell tower to display a fixed red light, known as Stony Point Lower Light.

There have been three keepers dwellings at Stony Point. The original six-room stone dwelling was torn down in 1879 and replaced by a dwelling on the flat land just west of the lighthouse. The second house was razed and replaced by another structure, built closer to the river in 1938.

Just four years after he took over as keeper of Stony Point, Alexander Rose was carrying timber for the construction of the new bell tower when he ruptured a blood vessel and then passed away a few weeks later, leaving his wife Nancy alone to look after their six children.

Nancy rose to the challenge of caring for Stony Point Lighthouse as she raised her children, but sadly, only two of her six children survived to adulthood. Once during a dense fog, Nancy Rose remained at her post in the lighthouse for fifty-six hours, half frozen and without food, while she faithfully tolled the fog bell every thirty seconds.

A newspaper article in June 1903 reported that the seventy-something Nancy Rose was attacked while alone by an Italian lunatic, who began to tear up carpets and smash furniture. Nancy sized a poker and struck the intruder on the head. The man fled, and locked the door on the outside. Nancy tolled the fog bell to attract attention, and the man was soon apprehended.

Having the longest tenure of any keeper at Stony Point, Nancy Rose served forty-seven years until her passing in 1904 in her eightieth year. Shortly before her death, she was asked in an interview for a local newspaper if she had any interesting experiences from her years serving as keeper. She replied, Nothing ever happens up here. One year is exactly like another, and except for the weather, nothing changes. Her daughter, Melinda, shared her sentiments, stating, I cant remember anything that has ever happened, except once our cow died, and several times its been bad years for the chickens. But even the one wreck wasnt really what you might call a wreck, for nobody was hurt, and it wasnt mothers fault anyhow, for both the lights were beaming as brightly as ever.

Melinda must not have thought the lighthouse business too boring for in 1904, after her mothers death, she applied for the keeper position. She was told, at age fifty-three, that she was too old, but Melinda would not be deterred and sought help from her Congressman. Melinda served one year as keeper and then resigned because the annual pay of just $560 was too little for the amount of work and responsibility attached to the job. When the pilots on the Hudson River learned Melinda Rose was leaving her post, they would hail the faithful keeper and send their regrets through megaphones as they passed the station.

The one wreck recorded at Stony Point was the grounding of a passenger ship, the Poughkeepsie that left forty to fifty people stranded in the middle of the night. Seeking shelter from the driving rain, they knocked on the door of the keepers dwelling, and Nancy Rose graciously took them in and served them hot coffee and sandwiches and helped them dry their clothes before they caught a train to New York.

In 1914, a newspaper noted that Captain Frank Guyette, keeper of Stony Point Lighthouse was doing lighthousekeeping on his lighthouse without a lighthouse housekeeper. Mrs. Guyette deserted the keeper for a handsome policeman in the neighborhood, forcing the keeper to advertise for a housekeeper to help him. After hiring a new housekeeper, so many villagers were anxious to know who she was that Guyette invited them to view her on parade. The housekeeper refused to parade, and Keeper Guyette was forced to continue lighthouse keeping without a housekeeper.

Keeper Millard Caler extinguished the beacon atop the lighthouse for good in 1925, when a steel tower built near the shoreline replaced the lighthouse. The steel tower was manually operated until 1973, and was the last manned light on the Hudson River. In 1923, Keeper Caler rescued two men from drowning whose boat had overturned about twenty feet from shore. After providing them warm clothes and hot drinks, the keeper sent them home.

Through the efforts of the Stony Point Battlefield State Historic Site, the Palisades Park Interstate Commission, and New York State Office of Parks, Recreation, and Historic Preservation, restoration of the lighthouse began in 1986. The exterior was repaired and painted, and the lantern was reglazed. On October 7, 1995, restoration was complete, and the light was activated for the first time in seventy years. The automatic light, operated by solar power, beams a flash of light once every four seconds.

The lighthouse is open to the public with exhibits and a restored interior. A fourth-order Fresnel lens was placed in the lantern room in 1995, when the lighthouse was reactivated, but it was removed around 2011 and placed on display in the museum at Sonty Point Battlefield State Historic Site. The lighthouse no longer exhibits a light, but the Coast Guard does maintain a flashing light on a skeletal tower at the end of the point.

Located in Stony Point Battlefield State Historic Site, on the banks of the Hudson River in Stony Point.
Latitude: 41.24134, Longitude: -73.97174

For a larger map of Stony Point (Hudson River) Lighthouse, click the lighthouse in the above map.

To reach the park, take the Palisades Interstate Parkway to exit 15. Go east on Route 106/210 for 2.4 miles to Route 9W. Turn left on Route 9W and proceed north through the village of Stony Point for 0.8 miles and then turn right on Park Road. Stay to your left at the bottom of the hill, and the site entrance is straight ahead. Call (845) 786-2521 before your visit to confirm the hours and to see if the lighthouse can be opened for tours.

The lighthouse is owned by the Palisades Interstate Park Commission. Grounds open, tower open during tours.