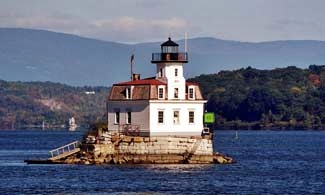 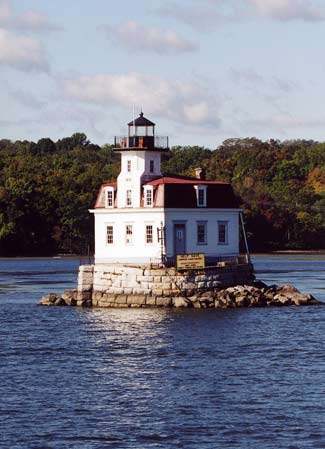 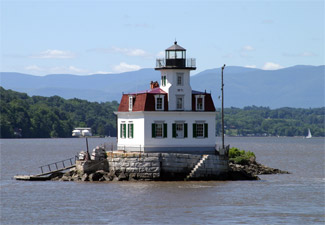 There was once a meadow in the middle of the Hudson River near Esopus, big enough for cows to graze on its green grass at low tide, but the river changed, and now the meadow is underwater at any tide.

Esopus Meadows Lighthouse , the Maid of the Meadow, was constructed in 1839 for a sum of $6,000 to warn mariners of this submerged mudflat and safely guide river traffic to the east side of the river to avoid the dangerous shallows.

On March 3, 1831, Congress appropriated $3,000 for a lighthouse at Esopus Meadows, but six years later, Stephen Pleasonton, the Fifth Auditor of the Treasury who was in charge of the countrys lighthouses, noted that construction had not started since the project would cost twice that amount as the site was inundated at high tides, rendering it necessary to place the building on a pier so strong as to resist the floating ice in the spring of the year.

Congress provided $3,000 on March 3, 1837 for commencing construction of Esopus Meadows Lighthouse and followed this up with a second appropriation of the same amount on July 7, 1838 to finish the work. The first Esopus Meadows Lighthouse was a twin to the original Rondout Creek Lighthouse and consisted of a thirty-four by twenty-foot stone dwelling, topped by an octagonal tower and lantern room, that rested on a nine-foot-high wooden pier measuring forty-one by fifty feet with an angular extension to the north that served as an icebreaker. Four lamps and reflectors were used in the lantern room atop the lighthouse to produce a fixed light that was first kept by Jeremiah Teerpenning. A sixth-order lens took the place of the lamps and reflectors in 1854.

Flood tides and ice floes eventually weakened the structure, which was described in 1867 as being in a ruinous condition. In 1869, it was noted that the keepers dwelling was unfit for occupancy in the winter and that the wooden pier was in such a dilapidated state that the lighthouse might be taken away by the ice and freshets during the coming winter.

Congress provided $25,000 on July 15, 1870 for rebuilding the lighthouse, but the money came so late in the season that work couldnt start until the following spring. The foundation for the second lighthouse, built 100 feet southeast of its predecessor, consists of 250 forty-foot-long piles that were driven into the riverbed and capped with twelve-inch-square timbers and a circular granite pier. The second Esopus Meadows Lighthouse, the only wood-frame lighthouse with a clapboard exterior on the river, sent forth its beam from a fifth-order Fresnel lens with a focal plane of fifty-eight feet above the river for the first time on August 26, 1872. The lighthouse was based on a design by Albert R. Dow that features a rectangular, two-story dwelling with a tower protruding from one end of its mansard roof, and similar lighthouses served at Colchester Reef in Vermont, Rose Island and Pomham Rocks in Rhode Island, and Barbers Point, Bluff Point, North Dumpling, Stepping Stones, and Hudson-Athens in New York.

A bell, struck by machinery every ten seconds when needed, was added to the lighthouse with the opening of navigation in 1891.

Keepers and their families lived at the station, which was accessible only from the water. The first floor of the lighthouse was a combination kitchen/dining room/living room, while bedrooms were located on the second level. A barnyard of pets kept Keeper John Kerr company at the lighthouse. Two deodorized skunks ran the rails of the lantern room, and when Kerr rowed to town, he always brought along his pet rooster which sat, head cocked, in the bow of the rowboat.

When the river froze over in the winter, the lighthouses along the river were shut down, and many keepers took part-time jobs on shore. In the summer, if the station was in order and the inspector was not due for a while, the keepers would join the fruit harvest to earn extra cash.

On September 14, 1903, an inspector did come calling and found Keeper George R. Humphrey away from the station. The inspectors report read: Station is in good condition. Lamps not cleaned & keeper absent from station & is evidently neglecting duty by being frequently absent. Dwelling needs painting. Keeper hereby directed to paint dwelling  and admonished to be more attentive to duty or will be probably transferred to less desirable station or discharged. Keeper Humphrey apparently did not like the admonition he received as he wrote out his resignation that same day to take effect on the third day of October, 1903.

A light was mounted on a metal tower adjacent to the lighthouse when it was automated in 1965. The Coast Guard planned to demolish the structure, but it was spared when the Hudson River Valley Commission expressed interest in preserving it and three other Hudson River lighthouses.

Boards were placed over the lighthouses windows and then painted to look like curtained windows. One of the paintings even had a black cat in the window, giving the lighthouse a lived-in look and hopefully discouraging trespassers. Left unattended, Esopus Meadows Lighthouse deteriorated quickly. Over the years, several barges slammed into the granite pier, and the continual force of flood tides and ice floes weakened the pier to the point where it developed cracks. Settling of the foundation also caused the east side of the lighthouse to droop sixteen inches.

Almost certain demolition was on the horizon when Arline Fitzpatrick, whose uncle Manny Resendes was lighthouse keeper from 1937 to 1944, leased the site from the Coast Guard and began the long task of restoring it with a team of dedicated volunteers. Arline used to stay at the lighthouse with her aunt and uncle in the summer, and when she returned to live in Port Ewen in the 1980s as an adult, she was devastated by the ruinous condition of the lighthouse.

In 1997, the Save Esopus Lighthouse Commission (SELC) was relaunched under the direction of Pat Ralston to complete the transformation of the lighthouse. Through much diligent work and many grants, the lighthouse has been placed on an I-beam frame, been put back into proper horizontal alignment, and had its interior painstakingly restored.

On September 22, 2002, under the National Historic Lighthouse Preservation Act of 2000 pilot disposal program, title of the lighthouse passed to SELC. The Coast Guard promised that if SELC restored the lighthouse, the light would be returned to the lantern room. True to its word, the Coast Guard transferred the light on May 31, 2003, and once again the signal beamed forth from the Maid of the Meadow. Stan Fletcher, one of three coastguardsmen on duty at Esopus when the light was extinguished in 1965, was given the honor of flipping the switch.

In May 2010, a floating dock was installed to permit larger vessels to call at the lighthouse, and in July, the lighthouse was opened to visitors arriving aboard the Estuary Steward. Ten tour dates were offered in 2010, and an enhanced schedule followed in subsequent years. Restoration will be an ongoing effort at the lighthouse, but the public can now visit Hudson Rivers only remaining wooden lighthouse thanks to the efforts of the dedicated members of the Save Esopus Lighthouse Commission.

For a larger map of Esopus Meadows Lighthouse, click the lighthouse in the above map.

Views of the lighthouse from the west bank of the Hudson River are possible from Esopus Meadows Preserve or the nearby Lighthouse Park. To reach the park, take Route 9W north from the west side of the Mid-Hudson Bridge. Continue for 10.3 miles, then turn right on River Road. The entrance to the park will be on your right after 1.3 miles.

Views of the lighthouse from the east bank of the Hudson River are available from the grounds of the Mills Mansion. The mansion is located in Staatsburg, NY, midway between Hyde Park and Rhinebeck off NYS Route 9.

The lighthouse is owned by the Save Esopus Lighthouse Commission.


We just happened to arrive in Kingston as a tour group was boarding the Rip Van Winkle for a cruise down the Hudson River. It wasnt a scheduled public cruise, but they gladly accepted our money and welcomed us aboard. The highlight of the cruise for us was, of course, great views of Rondout Lighthouse and Esopus Meadows Lighthouse, but we also enjoyed other magnificent sites in a colorful fall setting. Gracing the slopes above the river is the Mt. St. Alphonsus Seminary, a stately Gothic building. Further south, we passed the Vanderbilt Mansion, which was built by Frederick Vanderbilt and which is now a national historic site. Near the Vanderbilt Mansion is Springwood, Franklin D. Roosevelt's home and site for his Presidential Library. This cruise is definitely a good way to see Esopus Meadows Lighthouse ... all the other sites are an added bonus.