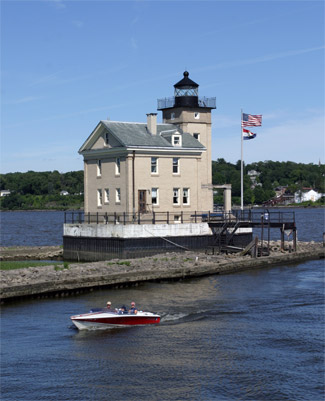 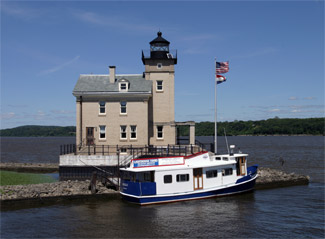 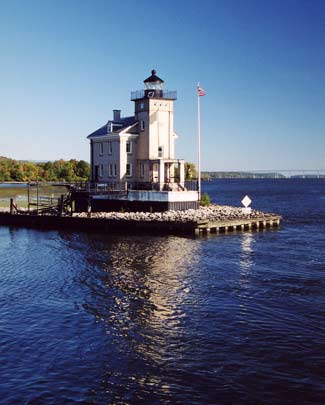 Rondout became a bustling port following the completion in 1828 of the 108-mile-long Delaware and Hudson (D&H) Canal, the first privately funded canal in the United States. The last several miles of the canal, which linked coal mines in northeastern Pennsylvania to the Hudson River and markets beyond, followed Rondout Creek to reach the Hudson River. Steamboats, sloops, schooners, and barges loaded with passengers and cargo regularly left the port bound for New York City, making the junction of Rondout Creek and the Hudson River a prime candidate for a lighthouse.

The first lighthouse to mark the confluence of Rondout Creek and the Hudson River was established in 1838 on the south side of the creek, warning mariners of the shallow tidal flats surrounding the creeks mouth. This wooden structure was built atop a ten-foot-tall, forty-two by fifty-foot pier at a cost of nearly $5,000 and consisted of a frame dwelling topped by a tower. Seven lamps with parabolic reflectors originally showed a light in every direction, but by 1850, when Josiah Warner was keeper, the number of lamps had been reduced to four. In 1855, a 300° Fresnel lens and a single Argand lamp replaced the five lamps and fifteen-inch reflectors that were then being used in the lantern room.

Ice floes and tidal currents wreaked havoc on the lighthouses wooden pier, and by 1855 the timbers in the cribwork pier along with the exterior plank covering were much decayed. The cribwork was strengthened in 1856, but it was soon apparent a new lighthouse and suitable pier were needed, and on July 28, 1866 Congress appropriated $22,000 for the project. A new bluestone lighthouse, built on a circular cut-stone base and known as Rondout I, was completed in 1867. Roundout I was a substantial lighthouse, consisting of a square tower built into the interior angle of a two-story, L-shaped dwelling. A parlor, dining room, and kitchen were located on the first floor, with three bedrooms and a watchroom on the second floor. Steps in the watchroom led to the lantern room.

In 1869, the government surveyed the harbor at Rondout Creek, which had a depth of just seven feet, and recommended that two parallel dikes be extended into the Hudson River in order to create a one-hundred-foot-wide channel with a depth of fourteen feet. Work on the dikes began in 1872 and was completed in 1880 at a cost of $90,000. The north dike measured 2,200 feet in length and had a branch running up the Hudson River for 1,000 feet to protect the work from running ice. The south dike was 2,800 feet long and had a 330-foot spur connecting it to the lighthouse. In 1880, three stake lights were established to mark the new dikes. A light was placed at the extremity of each of the two dikes, and a third light was placed at the bend in the north dike, just a short distance from the mouth of the creek.

Congressman George W. Fairchild introduced a bill in Congress in 1908 asking for funds to construct a new lighthouse at the mouth of Rondout Creek. This bill was prompted by a petition signed by local river boatmen, who desired a fog signal at this important junction and felt that Rondout I was too far inshore to properly mark the dikes.

On March 4, 1911, Congress appropriated $40,000 for establishing a light and fog signal station to more effectively mark the outer ends of the dikes at Rondout Creek. Work on this new two-story yellow brick lighthouse, dubbed Rondout II and located at the end of the north dike, began in March 1914 under the direction of L.H. Bannon Plumbing & Heating Construction Co. The lighthouse, which is the newest on the Hudson, was placed in operation on August 25, 1915 and cost $33,575.81. The lighthouses fixed red light was produced by a fourth-order Fresnel lens that had a focal plane of fifty-two feet, while its fog signal consisted of a 1,000-pound bell struck by a clockwork mechanism.

The iron lantern and deck were removed from the old lighthouse in 1916 and shipped to Rhode Island, where they were installed on the Bristol Ferry Lighthouse. The abandoned 1867 lighthouse was put on the auction block, but never sold as the new owner was required to remove the structure from the pier. After the lighthouses roof collapsed, the Coast Guard was fearful that children playing around the old building would be injured so Joseph Stephano, a local contractor, was hired to demolish the structure. Two charges of dynamite leveled the remains of the lighthouse on May 19, 1953, but its circular stone base can still be seen today.

The George Murdock family served as keepers at all three lighthouses.

After having been employed at Sing Sing Prison, George Murdock came to the first lighthouse in 1856 with his pregnant wife, Catherine, and two small children, George and Emma. Roughly a year later, George drowned as he was returning home from picking up supplies from town. Catherine later recalled that event.

It was a sore time for me  no one to help, but the light  taking care of that as I had to  did help me to bear up. I kept on for a month after the funeral cleaning and tending both lights, and in the winter, after navigation had stopped, some good friends gave me letters and on I went to Washington with this big boy here (pointing to her son James, the present keeper of the lighthouse) just a baby in my arms.

I wanted to be made lighthouse keeper at Rondout. At first the gentlemen at Washington told me it was impossible; the board didnt employ women, and besides, there was my infant. But I said: Gentlemen, Im a-going to bring him up to be a lighthouse keeper, and where could he learn it so well as in a lighthouse, and who could teach him better, dye think, than his own mother who knows well how to care for the light.

That settled all of em. I could see by their faces they took in the strength of the argument. But nothing was done then and they told me to go on back home and keep up taking good care of the lights. I done it, but I was fearful they wouldnt give me the light. But they did, and before navigation set in I was made the regular lighthouse keeper. Better even than that; along in April come a fine kitchen range, for I had told the gentlemen at Washington that was what I needed.

Catherine remained in charge of the light for fifty years, until her retirement in 1907, and served at both the first and second lighthouse.

One morning, as she was working in her waterborne castle (as the locals called the second lighthouse), she was greeted by a schooners bow crashing through a first-floor window and gliding halfway through the room. The schooner had been crowded out by a tug and had nowhere else to go. Repairs were quickly made.

Catherine recalled that her most nerve-racking night occurred in December 1878, when an unusually heavy snowstorm turned to rain. Locals had urged Catherine the day before to abandon the lighthouse and go to the mainland, but she calmly replied, The safety of the lives of many boatmen depend upon the lights being lit in the tower. I will never desert my post of duty. If the lighthouse does go down tonight, I go with it. The Eddyville dam upstream burst and the ensuing flood carried away houses, barns, barges, and boats. Catherine could hear the turbulent crashing river screaming through the darkness toward the lighthouse, but she continued to keep the light beaming and held firm in her castle. The next morning, she surveyed the damage and found the lighthouse had sustained little injury.

Her son James, who was born in the original lighthouse, became assistant keeper in 1880, and then head keeper upon her retirement in 1907. James B. Murdock served as keeper of both Rondout I and Rondout II, and the rescues he performed were often cited in the lighthouse service records. On May 12, 1912, Keeper Murdock rescued seven men from the wreck of the Geisha and cared for them during the night. The following year, he rendered assistance to three fishermen in distress. In 1915, Keeper Murdock assisted an exhausted swimmer, carried out of his course, and helped raise the sunken motorboat Natalie. When a Canadian seaplane had engine trouble in 1921 and was forced to land near the lighthouse, Keeper Murdock assisted its owner, Bishop Baker. The next year, Murdock rescued a man who had slipped off the dike into the icy creek and, after furnishing him dry clothing, rushed him ashore to receive medical treatment.

Besides his numerous rescues, Keeper Murdock was also awarded the lighthouse efficiency pennant on at least two occasions for having the model station in the district. The Murdock lightkeeping dynasty finally ended with James retirement in 1923.

Robert L. Howard kept the light from 1935 until he slipped and fell near the lighthouse in January 1945, while walking across the ice with a few other men to see the Coast Guard icebreaker anchored nearby. The men assisted Keeper Howard back to the lighthouse, but during the night his condition became worse, and he was taken to Kingston Hospital, where he died a few weeks later.

The last keeper, Herman Lange, who was quite popular among the locals, locked up the lighthouse when the light was automated in 1954. Warren Spinnenweber of Port Ewen monitored the light from land from 1954 until the 1990s.

In 1984, the Hudson River Maritime Museum entered into a thirty-year lease with the U.S. Coast Guard and took charge of the structure. Through the collaboration of the museum and the City of Kingston, both the interior and exterior were restored between 1984 and 1988. The interior décor is representative of the 1930s.

Under the provisions of the National Historic Lighthouse Preservation Act of 2000, the City of Kingston received ownership of Kingston-Rondout Lighthouse on June 19, 2002, in a ceremony that included local and national political leaders and representatives from the National Park Service, America Heritage Rivers, and Hudson River Greenway. Daily operation of the lighthouse is managed by the Hudson River Maritime Museum, and boat transportation to and tours of the lighthouse are offered during the summer months when possible.

For a larger map of Rondout Creek Lighthouse, click the lighthouse in the above map.

Boat trips to and tours of Rondout Creek Lighthouse are offered by Hudson River Maritime Museum. Hudson River Cruises offers trips that pass by both Rondout Lighthouse and Esopus Meadows Lighthouse. The lighthouse is also visible from the waterfront in Kingston.

The lighthouse is owned by the City of Kingston. Dwelling/tower open during tours.