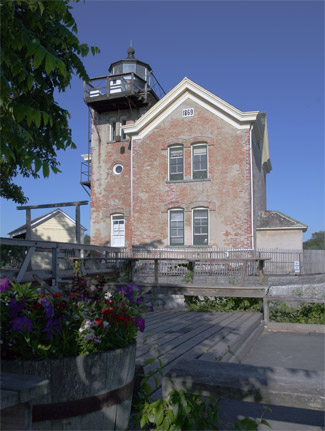 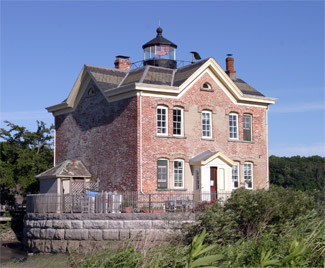 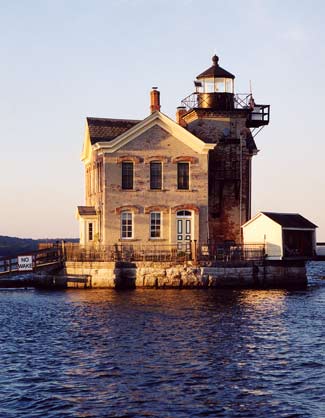 Practically a pile of crumbling bricks poised to tumble into the Hudson River, Saugerties Lighthouse barely escaped the demolition ball in the 1960s. Today, completely renovated and delighting B&B guests, it stands as a testament to the perseverance and hard work of many dedicated individuals. The name Saugerties is derived from the Dutch Zagers Killetje, meaning a sawmill on a creek, and in fact, there was a mill built on Esopus Creek to harness the creeks waterpower. The mill formed the cornerstone of a thriving paper industry, which produced as much as eight tons of paper daily, making it one of the leading producers of paper in the 1800s.

On June 30, 1834, Congress appropriated $5,000 for the construction of a lighthouse at the mouth of the creek to guide mariners past the nearby shallows and into Esopus Creek and the busy port of Saugerties. Charles Hooster built the lighthouse on a forty by fifty foot timber-framed pier, and its light, produced by five whale oil lamps set in parabolic reflectors, commenced operation in 1835 with Abraham Persons as its first keeper.

A fire in 1848 destroyed the original lighthouse, but it was rebuilt on the old site by 1850, at which time four lamps were being displayed from atop the two-story structure. Light lists described the second lighthouse as a light on keepers house. A sixth-order Fresnel lens replaced the array of lamps and reflectors in the lantern room in 1854.

Ice floes and tidal currents took their toll on the foundation pier, and on March 2, 1867, Congress appropriated $25,000 to build a replacement lighthouse just a few yards closer to shore. This structure, still standing today, was built on a circular granite crib, with a depth of twelve feet and a diameter of sixty feet, that rests on fifty-six pilings sunk into the riverbed and topped with three layers of six-inch timbers. The two-story lighthouse has twenty-inch-thick natural colored brick cavity walls, and a sixth-order Fresnel lens cast its beacon from the lantern room. No longer needed, the old wooden lighthouse was sold.

Saugerties Lighthouse was considered a plum assignment due to its proximity to town. In 1888, Saugerties Harbor was enlarged through the construction of jetties, and the keepers jaunt to town was made easier when a small road was built along the north jetty to the lighthouse.

The lightkeepers were friendly with their neighbors and even enlisted their help. A neighbor downriver would hang a bed sheet out their window whenever they saw the lighthouse tender coming upriver, giving the lightkeeper about a half-hour notice before the inspector arrived.

Daniel Crowley was serving as keeper of the light when the current brick lighthouse was built. He had been placed in charge of the light in 1865, replacing his father Dennis, who was removed from service after just three months. Daniels sister Katie grew up at the lighthouse and seemed to be amphibious. She would often venture out into the river alone in a skiff, and when her little craft was upset, there were no worries as she could swim like a duck. Katie was made the official keeper of the light in 1873, and her lack of fear of the water, led to some remarkable rescues.

In 1875, a young couple fell into the river while attempting to cross on the ice. Katie had rigged her boat with runners and soon arrived at the scene, where she was able to rescue the young man. The only sign of the young lady was a portion of her dress floating on the water. Realizing the woman was under a cake of ice, Katie plunged into an opening in the water and pulled the limp and lifeless body out on the ice. Though it took several minutes, the woman eventually regained consciousness.

On another occasion, a sloop loaded with bluestone overturned near the lighthouse during a storm. Katie and her sister Ellen launched the stations boat and set off to help. The following account of the rescue as told by a river captain who observed it was printed in 1878:

The waves ran so high, the gale blew so madly, the thunder roared so incessantly, and the lightning flashed in such blinding sheets, that it seemed impossible for the women ever to reach the men, to keep headway, or to keep from being swamped. But they never missed the opportunity of a rising billow to give them leverage, and they managed by steady pulling to get ahead until they reached the men in the water. The great danger was that the tossing boat would strike the sailors and end their career, but one of the girls leaned forward over the bow of the boat, braced her feet beneath the seat on which she had been sitting, stiffened herself out for a great effort, and as her sister kept the bow of the craft crosswise to the waves, caught one of the men beneath the arms as he struck out on top of a billow, lifted and threw him by main force into the middle of the boat, and then prepared for the other man.

When a reporter questioned Katie about her rescues, she was loth to talk about them and acted as if they were not worthy of elaboration. After some prodding, Katie summed up her service, We are simply two girls trying to do our duty here in this quiet place, taking care as best we can of our blind father and aged mother. Dennis Crowley, Katies father, was seventy-five at this time and had lost his vision to cataracts. James Crowley, Daniels son and Katies nephew, became the fourth member of the family to be in charge of the light when he replaced Katie as keeper in 1885.

Around the turn of the century, the boathouse, located atop the foundation of the first lighthouse, a small island east of the current lighthouse, was moved to the circular lighthouse pier. In 1910, a wooden platform was extended from the top of the tower to support a fog bell, and an enclosed shaft was mounted below the platform to protect the suspended weights that powered the bell striking mechanism.

Conrad Hawks twenty-six-year stint as keeper, lasting from 1914 to 1940, was far longer than that of any other keeper of Saugerties Lighthouse. In 1916, his son Earl and daughter Ilah were playing with a small battery and brought it into contact with the large battery used for the stations fog bell. The resulting short-circuit caused an explosion that blew the battery to pieces, cutting Ilahs face, and produced a current that burned Earls arms. Earl nearly lost a big toe in 1922 when his foot came into contact with a boats propeller as he tried to climb aboard while swimming near the lighthouse.

Though they both had a few scars, Earl and Ilah survived their childhood at Saugerties Lighthouse. Earl Hawk graduated from the Navys school at Annapolis and entered the submarine service, while Ilah attended Cortland State Teachers College and became a physical education instructor. Just before Christmas in 1939, Keeper Hawk went to the hospital to receive treatment for stomach ulcers, but the treatments failed, and he passed away on January 8, 1940.

When electricity was extended to the lighthouse in the 1940s, the dwelling was modernized with steam heat, plumbing, and a telephone.

In February 1954, Keeper Ed Pastorini was informed his light would be automated come spring. Wanting to leave the station in tip-top shape, he lovingly painted the three large upstairs bedrooms. Tears flooded his eyes when he closed the door and left the lighthouse for the last time.

The lighthouse tender soon arrived and its crew tore out the plumbing, furnace, and fixtures. In stark contrast to Keeper Pastorinis care, gallons of water were drained out on the floors and left to soak through the floorboards. The building was sealed up and left to deteriorate, which it quickly did.

A decade later, the Coast Guard planned to demolish the vandalized and dilapidated lighthouse, when in stepped Ruth Reynolds Glunt, wife of Chester B. Glunt, a former Coast Guard light attendant stationed at Turkey Point near Saugerties. Mrs. Glunt, a longtime friend of many lighthouse keepers along the Hudson River, carried a passion for saving lighthouses and mounted a campaign to halt the demolition. Through her efforts and those of architect Elise Barry, the structure was placed on the National Register of Historic Places in 1978.

Roughly 10,000 old bricks, which had crumbled after being penetrated by moisture, were replaced. The lantern room was removed and refurbished. Stairs, handrails, floors, and walls were completely reconstructed. To top of the transformation, a solar powered light installed in the lantern room by the Coast Guard was activated on August 4, 1990.

Saugerties Lighthouse, furnished in 1920s décor, is now open to the public and welcomes overnight guests as a bed and breakfast. Visitors can walk to the lighthouse along a one-half-mile-long trail through the Ruth Reynolds Glunt Nature Preserve, where they will be greeted by a modern day resident keeper who runs the bed and breakfast and maintains the lighthouse.

For a larger map of Saugerties Lighthouse, click the lighthouse in the above map.

Take Exit 20 from Interstate 87 west of Saugerties, and go east on Route 212 into the town where you will intersect Route 9W. Proceed straight on route 9W North for four blocks. You will arrive at a T where 9W turns left. Turn right onto Mynderse Street. Follow this road and bear left at the stop sign. Proceed down the hill and out to the lighthouse parking lot which is just beyond the Coast Guard Station. There is a nature trail, which leads to the lighthouse. Note that the trail floods at high tide.

A museum is located in one room on the second floor of the lighthouse, where a video that chronicles the restoration effort can be viewed. A fourth-order Fresnel lens was previously on display in the museum, but the Coast Guard retrieved that lens and replaced it with the sixth-order Fresnel lens that was actually used at Saugerties Lighthouse. Tours of the lighthouse are available on Sundays from Memorial Day through Labor Day between noon and 3 p.m. or by appointment. Call (845) 247-0656 for more information or to reserve a room at the lighthouse.

The lighthouse is owned by the Saugerties Lighthouse Conservancy. Grounds open, dwelling/tower open during tours and to overnight guests.


An overnight stay at this lighthouse is an unforgettable adventure. First, the trail through the nature preserve is flooded at high tide, so consulting a tidal chart is required to arrive with dry feet. Who knew that the ocean tides had such an affect so far up river? I surely didnt, but we saw ample evidence to convince us. We asked the lightkeeper if he would take us out on his Huck Finn raft so we could photograph the lighthouse from the water, and he kindly obliged. We had a great ride on calm Esopus Creek, but then he headed out into the Hudson to reach the other side of the lighthouse. At that time, he mentioned that he had never attempted that before. We had planned to visit the lighthouses downstream the next day, but thought we might get a premature view of them that night aboard the small raft. Any concern was short lived, as the rafts small motor overcame the rivers current. Getting pictures of the lighthouse is always part of the experience.