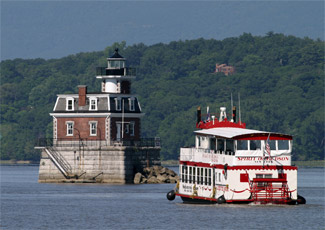 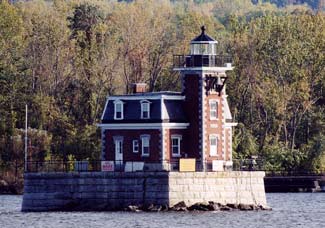 Henry Hudson was commissioned by the Dutch East India Company in 1609 to find a passage to the islands of spicery that would eliminate the lengthy and expensive voyage around Africas Cape of Good Hope. Provided with the eighty-ton ship Halve Maen and a crew of twenty, Hudson embarked on his journey in early April of that year, and in September he traveled as far inland as present-day Albany, on what was later named the Hudson River in his honor. Shallow waters eventually convinced Hudson that the river wasnt the fabled passage. Over a century after Hudsons voyage, a town bearing the name Hudson was established along the river of the same name. Fearing that England would try to reclaim her colonies, a group of whalers from Nantucket and Marthas Vineyard decided to move their business inland, and after sailing one hundred miles up the Hudson River, they selected a site on the river for their new home. The City of Hudson was chartered on the west bank of the river in 1798, while Athens was incorporated directly across the river in 1805. The two settlements were linked by a ferry and became important ports on the Hudson River during the nineteenth century.

Midstream between the cities was a large mud flat called Middle Ground Flats that was completely submerged at high tide. Many a ship found herself unexpectedly stranded on the flats, prompting a call for a lighthouse to mark the hazard in 1838. The southern point of the flats was suggested as a site for a lighthouse, but as the flats presented little actual danger to vessels and since there were numerous such obstacles in the countrys rivers, the matter was not given high priority.

On June 10, 1872, Congress finally appropriated $35,000 for a lighthouse on the Middle Ground, in the Hudson River, near the city of Hudson to help mariners safely reach the ports at Hudson and Athens. Work on the lighthouse, officially known as Hudson City Lighthouse, began in 1873, when pilings were driven fifty feet into the riverbed and then capped by a limestone pier. To protect the foundation from winter and spring ice floes, the north end of the pier was shaped like the prow of a ship.

Under a separate contract, a two-story, Second Empire style brick structure, similar to Stepping Stones Lighthouse, was built atop the granite foundation. Henry D. Best, the first of nine keepers the station would have, lit the beacon for the first time on November 1, 1874. A sixth-order Fresnel lens beamed forth a fixed white light at a focal plane of forty-six feet above the river until 1926, when a fifth-order Fresnel lens was installed in the lantern room and the lights signature was changed to a white flash every two seconds. The eight-room, redbrick lighthouse features limestone trimmings, a mansard roof, and a square tower centered in the western face of the dwelling. A fog bell, struck by a Gamewell apparatus, commenced operation at the lighthouse on July 15, 1894.

Keeper Henry Best performed several rescues during his service, and after his death in 1892, his son Frank took over as keeper and continued his fathers practice of helping vessels in distress. In 1912, as Frank Best was performing his duties, he heard a large crash near the lighthouse. He soon discovered the source of the noise  a collision between a tug and the passenger steamship Isabella of the Hudson-Catskill Line. Instinctively, Frank jumped into his rowboat and rushed to help. Frank took eleven women passengers off the steamer, and then ran lines to tug boats so they could pull the Isabella off the bar. The keepers werent the only ones to assist with rescues, as in 1918, Franks daughter, Bertha Munn, launched the stations boat and saved a man and boy from drowning.

Bertha had many fond memories of growing up at the lighthouse and recalled that she and her brother never missed a day of school except for illness. When the ice was weak, she said, we used a flat-bottomed boat to which was attached runners, and by means of a pikepole, pulled ourselves across the river on the ice. If a weak spot was struck and the boat went through, we were still safe and the boat was pulled through the ice instead of on top of it. Sometimes, instead of our walking to school, my father skated us to school on a sled that had a box-like bottom where my brother sat and a chair-like back on which I sat.

When Frank Best passed away in 1918, his wife Nellie was offered the position of keeper, but in September of that year she sent in her letter of resignation, and William J. Murray was transferred from Little Gull Island Lighthouse to take charge at Hudson City Lighthouse. William and Lillian Murray had three children when they moved to Hudson City Lighthouse, and a fourth one was almost born in the lighthouse. Keeper Murray recalls the occasion:

It was the middle of the night, but I saw I had to get the missus ashore, so I rowed her over. The town was dead, everybody gone to sleep.

I ran up and down the street looking for a policeman. Couldnt find one. Then I happened to see a mailman. He got the mail wagon out and we rushed my wife to the hospital.

Keeper Murray knew it was illegal to use a mail wagon for that purpose, but he figured hed been working for the government all his life, and they owed him a favor.

Emil J. Brunner kept the light from 1930 to 1949. For the first seven years, Brunner and his family lived at the lighthouse, but as the children grew older, the family moved into a house in Athens, and Brunner would then row out to tend the light. In September 1935, Mrs. Brunner was opening a jar of peaches when it exploded, driving fragments of glass into her left eye. She was rushed to the hospital in Hudson City, where her eye had to be removed.

In July 1946, Mead Schaeffer, an artist for the Saturday Evening Post, had the Brunner family pose at the lighthouse for the magazines Christmas-week cover. The painting shows Brunner rowing to the lighthouse with his son Norman and a Christmas tree on board. The rest of the family (with the artistic license of three extra children added and the relocation of the landing ladder from the east to the west side of the lighthouse) is shown standing on the deck anxiously awaiting their arrival. Brunner, the last civilian keeper at the lighthouse, retired in 1949.

After the lighthouse was automated, the Coast Guard planned to demolish it and erect a pole light in its place, but the Hudson River Valley Commission stepped in to save the structure and recommended that it be used as a recreational park. Little was done to preserve the lighthouse until 1982, when Hudson-Athens Lighthouse Preservation Society (HALPS) was formed to preserve and maintain the historic property. The U.S. Coast Guard leased the lighthouse to HALPS in 1984, while retaining responsibility for the upkeep of the beacon in the lantern room. On July 3, 2000, the title to the lighthouse was transferred to HALPS, a fitting reward for their dedicated efforts. HALPS has restored the interior of the lighthouse to represent life in the 1930s, when the Brunner family lived there. Many authentic pieces donated by the Brunner family are on display, and the original fog bell, which still has its clockwork mechanism, is mounted outside on the tower.

In 2003, the preservation society discovered that the lighthouses foundation was sagging and started to seek funds for repairs. A $200,000 state grant provided roughly half of the needed money, and the society took out a mortgage on the lighthouse in 2008 so the now-urgent work could be carried out that year. The work included an underwater inspection by Eastern States Construction Company, and the repair of thirty-seven timber piles and various timber pile caps and stringers. The south-east granite corner stone, which had been held in place by cables, was also jacked back into its proper position.

The public can visit the Hudson-Athens Lighthouse, the most northern of the remaining Hudson River lighthouses, on tours occasionally offered by HALPS during the summer months. A Fresnel lens used in the lighthouse is now in the possession of South Street Seaport Museum in New York City.

For a larger map of Hudson (Hudson-Athens) Lighthouse, click the lighthouse in the above map.

The lighthouse is owned by the Hudson-Athens Lighthouse Preservation Society. Dwelling/tower open during tours.