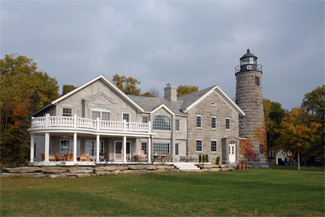 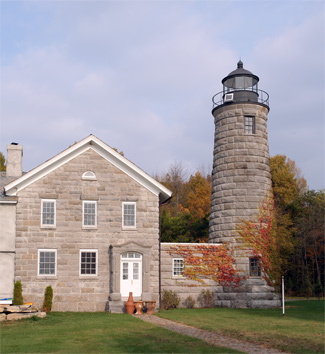 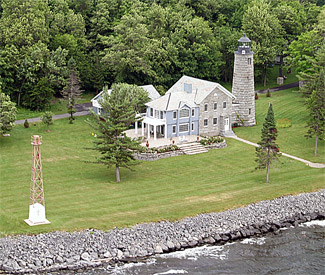 In 1814, the British launched a combined land and naval offensive from Lower Canada using Lake Champlain and the Champlain Valley as the invasion route. The British army, numbering nearly 11,000, marched south towards Plattsburgh under the command of Lieutenant General Sir George Prevost, while the British flotilla was led by Captain Downie aboard the Confiance.

On the morning of September 11, 1814, the British naval fleet rounded Cumberland Head planning to vanquish the American fleet and join the British army in taking control of Plattsburgh. Thomas Macdonough had strategically positioned the American fleet so that the only gap between his boats and the fort at Plattsburgh was a dangerous sunken reef. Captain Downie was killed at the beginning of the naval battle, which ended in a decisive victory for the ill-trained, ragtag Americans. Upon hearing of the defeat, the shell-shocked British retreated into Lower Canada. This victory was key in helping the United States defend its northern border and reach a peace agreement with Great Britain that soon ended the War of 1812.

Standing guard over this historic spot, Cumberland Head Lighthouse was built to guide mariners into the harbor at Plattsburgh.

In 1836, Luther Hager sold 8.62 acres of land to the federal government for $398.20 to serve as the site for the original Cumberland Head Lighthouse, after Congress had provided $5,000 for its construction on March 3rd of that year. Peter Comstock, who also built the first Split Rock Lighthouse, constructed the thirty-foot tower on Cumberland Head of native rubble limestone in 1837 at a cost of $3,325. Lieutenant Charles T. Platt visited the lighthouse shortly after it was first lit in 1838 and filed the following report:

This is a new building, and is lighted with 11 lamps and as many bright reflectors. The buildings, including the dwelling, &c, are finished in a manner highly creditable to the contractors.

Although this light affords to the mariner all the facilities required for entering or departing from the harbor of Plattsburg, yet it is found, on approaching from the north, to be entirely hidden until within fifty rods of the point on which the light-house stands. This fault it will be found difficult, if not impossible, to obviate. It is believed by many that the thick and lofty forests directly north of the light, if cleared away, would render this light conspicuous for some eight or ten miles north. I am inclined to differ in opinion on that subject; for, on examination, I have satisfied myself that the point of land directly north, and at a distance of little more than one mile, commonly called Gravelly point, is considerably higher than the light-house; consequently, the hewing down of the forest before mentioned would add but a short distance before the rise of land would intervene. I do not mention this circumstance with a view of attaching to it any importance. On the contrary, I know the navigation, in coming from the north, at least as far as the light could be seen, however elevated, is clear of shoals or hidden rocks, and so simple that it would be difficult for the mariner to blunder into trouble. I am therefore of opinion that the present location is a judicious one, and well calculated to answer all the purposes for which it is intended.

In 1856, a new lantern room and a fourth-order Fresnel lens with a fixed-white characteristic were installed atop Cumberland Head Lighthouse.

The Lighthouse Board requested funds in 1866 for the entire reconstruction of the tower and keepers dwelling at Cumberland Head, as the badly built lighthouse was too short to be seen from the north. Congress provided $18,000 on March 2, 1867 for rebuilding the lighthouse on a more eligible site, and later that year, the original tower was disassembled, and the raw materials were transported to a nearby location. Rough-hewn, blue limestone blocks were hauled by oxen from the Fisk quarry on Isle la Motte across the frozen surface of Lake Champlain to be used in the construction of the new tower and dwelling. Additional limestone came from the Clark Quarry on the New York side of the lake, and the stone from the first tower was used to finish the interior.

When work was complete, the new light station consisted of a fifty-foot conical tower attached to a two-story Victorian Gothic dwelling. Upstairs were two large and two small bedrooms, while a parlor, a dining-sitting room, and a pantry were located downstairs. The kitchen was housed in a one-story addition connected to the rear of the dwelling. The original fourth-order Fresnel lens was placed in the new tower and its light exhibited for the first time on November 1, 1868 at a focal place of seventy-five feet above Lake Champlain.

Soon, the new beacon was nearly surrounded by maturing trees, which obscured the light in the direction of Plattsburgh and Point au Roche. The owners of the trees offered to cut the trees at a price of $100 an acre, or to sell the land and remove the trees for $200 per acre. The government quickly calculated that it would be cheaper to purchase the necessary fifteen acres, and then resell the cleared land. An appropriation of $3,000 in 1871, covered the deal, and another $250 was provided in 1879 to purchase a smaller parcel and remove its trees as well.

After the Civil War, the Lighthouse Board gave preference to disabled veterans when filling lighthouse keeper positions. William Tabberrah, who had been struck in the hip by a Confederates bullet on May 31, 1862 during the Battle of Fair Oaks in Virginia, began his service as keeper of Cumberland Head in 1871, moving his wife Emma and two infant children into the newly constructed lighthouse. Six more children would be born to the Tabberrahs at the lighthouse. The local school was only a mile from the lighthouse so the children could walk, ski, or snowshoe to their classes.

Water from the stations well had a heavy concentration of sulphur, which gave it a strong taste that only Emma could tolerate. The rest of the family scooped up water from the lake in pails for drinking. Rainwater from the dwellings roof was stored in a basement cistern and then pumped up into the kitchen sink by hand for bathing and cleaning. With no year-round residents nearby, the Tabberrah children had few playmates, but they kept themselves occupied by playing croquet and tennis on the lighthouse grounds and fishing and sailing on the lake.

Although the bullet lodged in his hip caused him considerable pain, William performed his duties faithfully for over thirty years. In the summer of 1902, Rear Admiral Winfield Scott Schley, former lighthouse inspector of the third district, visited his son in Plattsburgh and while there paid a visit to Captain Downies grave and to his old friend Keeper Tabbarrah. When William saw the admiral, tears of joy streamed down his cheeks. To think, William said, that Admiral Schely would come to see me when Im sick. In early June 1903, surgeons operated on William at the Plattsburgh barracks hospital and removed the lead bullet, pieces of his old uniform that were still lodged inside him, and part of the hip bone, which had become diseased. Though the doctors were confident the keeper would entirely recover, the surgery unfortunately led to an infection, which took Williams life on October 18, 1904. Emma was appointed keeper in her husbands stead on December 19, 1904 and served until 1919, with the assistance of two of her daughters.

A forty-foot, steel, skeletal tower with a battery-operated light was built between the tower and lakeshore in 1934, and Cumberland Head Lighthouse was discontinued. The lighthouse was subsequently abandoned, and in 1946 the land was subdivided and offered at auction.

As part of a program for land ownership for World War II Veterans, Joseph and Rose Church moved into the abandoned and vandalized structure in 1948 after a fire destroyed their home. They renovated the keepers quarters and maintained the lighthouse for nearly fifty years. Mrs. Church, who recalled that the house was in shambles, and there was graffiti all over the place when they moved in, sold the property to another private party in 1996. With the help of the current owners, the Coast Guard returned the light to the limestone tower in March 2003. As seen in this picture, a large addition to the lighthouse dwelling was being worked on in 2006.

The Town of Plattsburgh incorporated a drawing of Cumberland Head Lighthouse into its official seal in 1984.

For a larger map of Cumberland Head Lighthouse, click the lighthouse in the above map.

A threatening sign, large enough to scare off even the most avid lighthouse enthusiast, used to mark the entrance to the private road that leads to the lighthouse. Although the sign has been removed, the best public vantage point for viewing the lighthouse is from the water or air. A distant view is possible from the Grand Isle, VT - Plattsburgh, NY ferry.