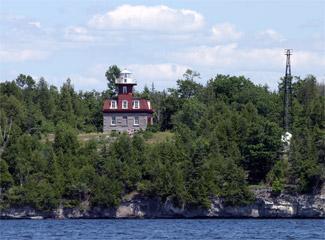 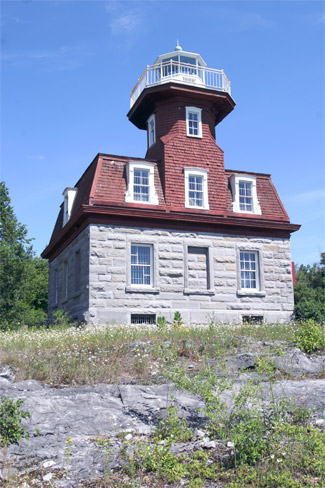 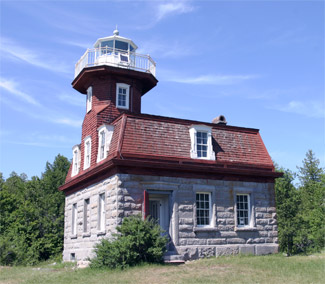 Bluff Point Lighthouse was built overlooking the site where, almost 100 years earlier, a desperate battle in the war for independence was fought. In the early morning of October 11, 1776, an American naval force, under the command of Benedict Arnold, secreted itself on the western side of Valcour Island, waiting for an impressive British fleet sailing south down the lake. The British discovered the motley crew shortly after 10:00 a.m., and turned to engage the Americans in what would be the first naval battle of the Revolutionary War, known now as the Battle of Lake Champlain.

During the conflict, which lasted throughout the day, the Royal Savage, the largest American ship, ran aground on the southwest corner of the island and was lost. Scores of men were killed on both sides, but the American vessels suffered the most damage. As darkness fell, Benedict Arnold, realizing his inferior fleet would not survive another day, hatched a daring and desperate escape plan. With their oars muffled, the American vessels rowed south hugging the shoreline to skirt the British fleet. Surprisingly, not one ship was detected, and by daybreak, Arnold had reached Schuyler Island, putting nine miles between himself and the enemy. Two damaged ships were scuttled near the island, while the rest of the fleet continued their flight south down the lake to Crown Point.

With an enraged enemy in pursuit, it was soon obvious that the crippled ships could not outrun the superior British vessels. Near Split Rock, the Americans were overtaken and shots were exchanged. A few American ships were quickly forced to surrender, and Arnold decided the only chance he had was to run the surviving ships aground, set them on fire, and flee south on foot. The site of the grounding is now known as Arnolds Bay.

Casting its shadow on the historic spot where the Battle of Lake Champlain began is a two-story lighthouse, located at Bluff Point on the western shore of Valcour Island.

Funding for Bluff Point Lighthouse on Valcour Island was approved by Congress on July 15, 1870 in the amount of $15,000, after the Lighthouse Board had first proposed the lighthouse in 1868. A contract for the project was signed in 1871, but work could not commence until a clear title to the land was obtained. After many vexatious delays in the search of title to the site, the title was finally secured in April 1873, but the previous owner demanded a right of way across the lighthouse grounds and the right to construct a wharf near the site. These conditions were agreed to as use of the wharf could be shared, and work on the lighthouse was at last underway. The cellar, half of which served as a cistern for holding water collected from the roof, had to be excavated from the solid limestone ledge on which the lighthouse stands.

Built of blue limestone rock, Bluff Point Lighthouse sports a red-shingled Mansard roof and has an integrated octagonal tower that rises to a height of thirty-five feet. The structure is a twin of Barbers Point Lighthouse, built the previous year farther south on Lake Champlain. A fifth-order Fresnel lens, which produced a fixed-white light, was placed in the lantern room at a focal plane of ninety-five feet above the lake, where it could be seen for eighteen miles.

Bluff Point Lighthouse was placed in service by William C. Wait in the spring of 1874 after Lake Champlain returned to liquid form and navigation resumed. The lighthouse was the last manned light station completed on Lake Champlain, and its charge was to guide ships through the channel running between the island and the New York shore.

Following the Civil War, vacancies in keeper positions at Lake Champlain lighthouses were often given to disabled veterans. Major William Herwerth was shot in 1865 after having served for nearly four years in the 91st New York Volunteer Infantry. The bullet passed close to one of his kidneys, severing many of its blood vessels. Herwerth carried the bullet with him the rest of his life and was unable to ride a horse or perform heavy manual labor. As an invalid, William returned home to his wife, applied for a pension, and received treatment from a doctor in Plattsburgh for kidney disease. In 1876, William was appointed keeper of Bluff Point Lighthouse when Keeper Wait was removed. As his illness worsened, Williams wife Mary assumed much of the responsibility for tending the light. William eventually slipped into a coma and passed away at the lighthouse on February 17, 1881.

Shortly after Williams passing, the Plattsburgh Republican reported, The widow of the late Major Herwerth, lighthouse keeper on Valcour Island, has recently been appointed to the same office. This is as it should be. Mrs. Herwerth was in charge of the light for a long time previous to her husbands death, and work connected with the office will be just as faithfully done as ever, and this has for years been considered one of the best kept lighthouses on the lake. Mary J. Herwerth faithfully kept the light until 1902.

In 1930, a steel, skeletal tower with an automatic light was erected to replace the manned lighthouse. The light station and thirteen acres of surrounding land were then sold to a private owner. Dr. Adolph Raboff, a dentist from Massachusetts, purchased the property in 1954 and maintained the lighthouse as a summer residence. In the mid-1980s, Dr. Raboff offered the property to the State of New York, which controlled the rest of Valcour Island as part of Adirondack State Park. At the beginning of the negotiations, the state indicated their intention to raze the lighthouse and turn the property into a wilderness area, but Dr. Raboff refused to relinquish the property unless the lighthouse was preserved and made available to the public. A compromise was eventually reached wherein the state would own the lighthouse, and the Clinton County Historical Association would be responsible for maintaining the structure. The state paid $40,000 for the one-and-half-acre parcel, far less than other offers the Raboffs had received. Dr. Raboff, who in his fifty-five years of practice had provided dental supplies and services for the underprivileged in Nicaragua and Haiti, made the following comment regarding the sale of the lighthouse: If I can accomplish certain things, even at a loss of some money, I am happy. There is as much pleasure, as much dignity, in not dying with a million dollars. Raboffs wife Kathleen knew she would miss their piece of paradise but was proud of her husbands fight to preserve the lighthouse. Things like the lighthouse, she said, are like footprints, and if you destroy them, youre destroying history.

Raboffs selfless effort to save this bit of history was the first step in returning the lighthouses to its former glory. Under the leadership of Roger and Linda Harwood, the Clinton County Historical Association has restored the interior of the lighthouse and developed several interpretive displays on the structure and its keepers.

Bluff Point Lighthouse is the only lighthouse on Lake Champlain to be listed on the National Register of Historic Places. On November 16, 2004, the lighthouse celebrated another milestone in its restoration as the light was transferred back to the lantern room from the nearby skeletal tower. A public ceremony celebrating the relighting was held on June 11, 2005 at the Peru Boat Dock, just across the lake from the lighthouse.

A two-year-long, major restoration of the lighthouse began in August 2014. This work, funded in part by $170,000 from the State of New York, included replacing the roof, installing new doors in the lantern room, and applying a new coat of paint.

Located on Bluff Point on the western side of Valcour Island in Lake Champlain. The island is roughly a mile offshore from the towns of Valcour and South Junction.
Latitude: 44.62281, Longitude: -73.43124

For a larger map of Bluff Point (Valcour Island) Lighthouse, click the lighthouse in the above map.

The lighthouse is best seen from a boat or on the island itself, but decent views of the lighthouse from the mainland looking east across the 0.7 mile channel are possible from the Peru Boat Dock. The dock is located alongside Highway 9, 5.6 miles south of Plattsburgh.

Tours of the lighthouse are offered by Clinton County Historical Association on Sunday afternoons from 1 p.m. to 3 p.m. in July and August. When the lighthouse is open for tours, you still need to make your own arrangements for transportation to the island.