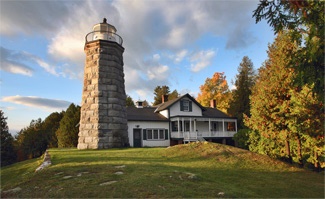 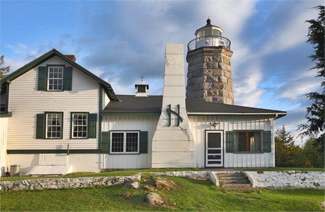 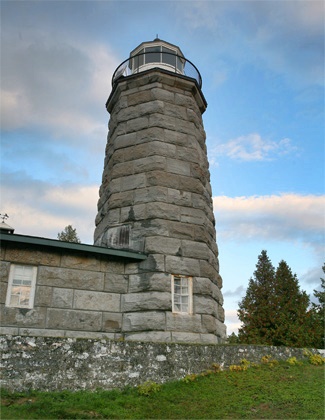 Along the New York shore near the southern end of Lake Champlain, an immense rock, split from the neighboring cliff by about twelve feet, rises thirty feet above the water. This formation, known today as Split Rock, was used as a dividing line between the warring Native American Mohawk and Algonquin tribes. Under the 1713 Treaty of Utrecht, France and Britain agreed to honor the traditional boundary of their Algonquin and Mohawk allies, and Split Rock became the northern limit of the British holdings.

At the rock, Lake Champlain narrows to approximately 3/4 of a mile, just two miles south of its deepest point (399 feet). As commerce increased along the lake, the need for a light to mark the spot became apparent.

On March 3, 1837, Congress appropriated $5,000 for the construction of a lighthouse at Split Rock Point, and later that year, an ideal, elevated parcel, just south of the rock, was purchased from Congressman Reuben Whallon for $500. The lighthouse was Lake Champlains third, and was built by Peter Comstock, who was also responsible for the original Cumberland Head lighthouse that was built at the same time. Costing $4,016, the lighthouse cast its beam for the first time in 1838, shortly after Cumberland Head Lighthouse, using eleven lamps and fourteen-inch reflectors. The stone tower stood thirty feet tall, but the lofty bluff on which the lighthouse stood, gave the light a focal plane of 110 feet above Lake Champlain.

In 1857, a new dwelling was constructed for the keeper, and the tower was fitted with a new lantern and a fourth-order Fresnel lens having a fixed white characteristic.

Using a Congressional appropriation of $9,600 made on April 7, 1866, the original tower was replaced in 1867 by a thirty-nine-foot, octagonal tower constructed of rough-hewn, blue limestone extracted from the Solomon W. Clark quarry on nearby Willsboro Point. A storeroom was built at the base of the new tower, and a wooden passageway was constructed to connect the tower to the dwelling, which was thoroughly repaired and repainted. The station also received a new boathouse in 1867. A freshet destroyed the boathouse in 1869, and a new boathouse, boatways, and a capstan for hauling up the boat were added to the station in 1871 using $600 provided by Congress earlier that year.

In 1874, the Lighthouse Board noted the dwelling at this station is in a state of decay and needs rebuilding. It is of poor construction, and unfit for the climate of this latitude, where the severe and long winters demand houses substantially built. To repair the present dwelling would cost as much as the building is worth. It is, therefore, recommended that an appropriation of $5,000 be made to rebuild it. A plea for a new dwelling was issued again in 1875 and 1876, but it appears the dwelling only received minor repairs until it was finally rebuilt in 1898.

Split Rock Lighthouse could not prevent all shipwrecks in the area. At 9:30 p.m. on July 16, 1875, the recently refurbished paddlewheel steamer Champlain, left Ticonderoga, bound north up the lake. After a brief stop at Westport, the pilots changed shifts with John Eldredge taking over the wheel from Ell Rockwell. Not long after leaving Westport, the large steamer shuddered violently and came to a dead stop. The vessel had run aground on the rocky shore of Split Rock Mountain.

Passengers were safely offloaded onto the Adirondack at 2 a.m., but the Champlain was a total loss. The valuable engines, furnishings, and other parts of the steamer were salvaged, while the rest of the vessel was left on the shore. The ice that formed on the lake that winter pulled the remaining pieces of the vessel to their final resting place just offshore from the site of the grounding.

An investigation into the incident found that Eldredge had been frequenting pharmacists around the lake to purchase morphine, and that at the time of the accident he had either fallen asleep or was in a drug-induced stupor. According to one account, Eldredge was never convicted for the steamers destruction in any official court of inquiry, but he was found guilty in the court of public opinion.

James Wakefield, Jr. was, by far, the longest-serving keeper at Split Rock Lighthouse, having spent more than thirty-five years at the fairly isolated station. Keeper Wakefield was awarded the lighthouse efficiency pennant for at least three years, 1914, 1916, and 1921, for having the model station in the district. In August 1895, Wakefield made the local papers by killing a rattlesnake that was forty inches long and had five rattles.

To reduce expenses, the Lighthouse Service authorized the construction of a steel skeletal tower to replace Split Rock Lighthouse. In 1925, the tender Beech transported a partially assembled skeletal tower to the point, but it was accidentally smashed on rocks while being erected. A replacement skeletal tower, surmounted by an acetylene light, was finally placed in service at Split Rock in 1928. The skeletal tower was the first of many such structures that would soon replace the function of the historic lighthouses on Lake Champlain.

Shortly after the metal towers were erected, the government was feeling the pinch of the Great Depression and decided to dispose of valuable surplus property on Lake Champlain. Split Rock Lighthouse was thus sold to Mary Hun of Albany in 1931 for $2,700. The Greek Revival dwelling and carriage house have been well maintained by the succession of owners. Since 1959, the station has been in the possession of the Heurich family.

The replacement skeletal tower deteriorated over the years, and a plan was set in motion between the Coast Guard and the owner to transfer the light from the steel tower back to the limestone tower. This dream was realized on March 19, 2003, when after seventy years of darkness, a light once again beamed from Split Rock Lighthouse.

In a January 2014 press release, the Coast Guard announced their intention to demolish or remove the metal towers at Split Rock and Isle La Motte: Both towers are of an obsolete design that does not meet current Coast Guard requirements for aids to navigation structures and are unsafe for Coast Guard personnel to climb for maintenance. Both towers present a safety hazard to persons on adjacent private properties and both towers present an environmental hazard due to deteriorating paint. Neither of the towers is an active aid to navigation. A deadline of May 1, 2014 has been set for finding a new owner for the metal tower.

For a larger map of Split Rock Lighthouse, click the lighthouse in the above map.

The lighthouse is a private residence, and the gated road that leads up the hill to the light is flanked by several threatening signs. The best views come from the water, the air, or the opposite side of the lake.