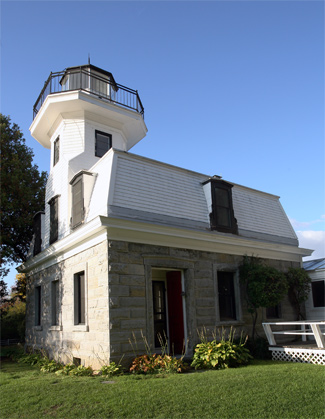 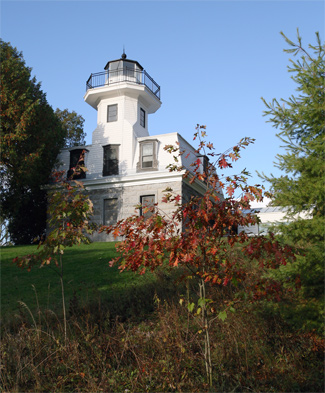 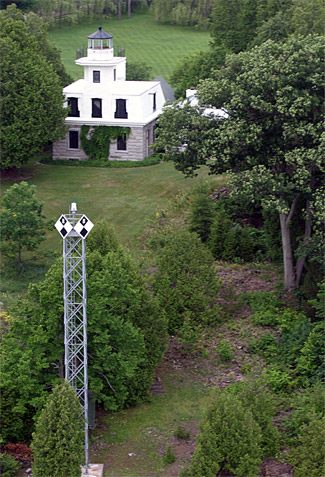 In 1785, Major Hezekiah Barber began clearing land on the eastern shore of Lake Champlain just south of the modern day town of Westport. The following year, Barber returned with Levi Frisbie, his brother-in-law, and spent most of that year cutting wood and building a cabin. In the spring of 1787, Huldah Barber, Hezekiahs wife, journeyed from Connecticut on horseback, carrying a baby in her arms, to take up residence in the rude log cabin that had been prepared by her husband and brother. Such was the beginning of the settlement of what is now known as Barbers Point. Barbers Point is roughly midway between Split Rock Point to the north and Crown Point to the south. As this stretch of 125-mile-long Lake Champlain is quite narrow, averaging only two miles in width, Barbers Point was a logical place for a ferry, and records indicate that Hezekiah Barber operated one that crossed Lake Champlain between Barbers Point, New York and Arnold Bay (Panton), Vermont.

The geography at Barbers Point also made it a prime candidate for a lighthouse, and in 1868, the Lighthouse Board petitioned Congress for the necessary funds. A sum of $15,000 was finally allocated on July 15, 1870, but due to difficulties in securing a valid title for the desired parcel, construction did not begin until 1872.

Work on the lighthouse, a two-story structure with a Mansard roof and an integrated tower, continued through the end of 1872, and the light made its debut at the opening of navigation on Lake Champlain in 1873. The lower story of Barbers Point Lighthouse is faced with blue limestone blocks and originally had a brown-shingled roof. A fifth-order Fresnel lens, with a focal plane of eighty-three feet above the lake, beamed a fixed white light, which was visible for 14 ¾ miles. Barbers Point Lighthouse is a twin to Lake Champlains Bluff Point Lighthouse, which was also funded in 1870 but didnt commence operation until 1874.

Due to the remoteness of the Barbers Point Lighthouse, the keeper was obliged to keep a horse to procure supplies for his family. A barn was thus needed at the lighthouse, and $1,000 was requested for its construction in 1873.

After the Civil War, the Lighthouse Board gave preference to disabled veterans when filling lighthouse keeper positions, and Barbers Point Lighthouse was first manned by two veterans: James E. Barnes followed by Charles E. Stevens. The third and final keeper of the lighthouse, however, was an artist, who spent his spare moments capturing the surrounding scenery on his canvas.

Thirty-five-year-old James E. Barnes joined Company A of the Seventy-Seventh Regiment of the New York Volunteers shortly after the outbreak of the Civil War, and in June 1864, he was lying in a rifle pit during the Siege of Petersburg when a rebel shell landed nearby. The explosion shattered his left leg, along with the left legs of two of his comrades, James Allen and James Lawrence. The three soldiers had to have their legs amputated and were subsequently known as the three one-legged Jims. Barnes was hired as the first keeper of Barbers Point Lighthouse and looked after the light for just over a decade. While on his way back to Westport after attending a veterans reunion where he was reunited with the only other surviving one-legged Jim, Barnes passed at his sisters home at Fort Ann in 1890.

It seems that sailing vessels are not the only objects that frequent the waters off Barbers Point. In 1871, passengers aboard the steamer Curlew claimed they saw a creature near Barbers Point that was forty feet long, had a large globular head, dirty-white in color, and traveled so fast it threw up a wake. Several sightings of this monster have since been reported around Lake Champlain. Though not as famous as its Scottish cousin Nessie, Lake Champlains Champ does maintain quite a following to this day.

Hans Anderssen, the last keeper of the lighthouse, was serving as an assistant keeper at Fire Island Lighthouse when a newspaper article dated June 2, 1911 told about his soliciting the help of newspaper men in finding himself a wife. Thirty-eight-year-old Anderssen received numerous replies to his advertisement but complained all of them were so awful old. One was 60  I dont want anybody like that. His luck must have soon changed though, as another article dated November 27, 1911 noted that Anderssen had sold his powerboat to two men at the wireless station on Fire Island and relocated to Barbers Point Lighthouse with his new bride, nineteen-year-old Blanch Mitchnel, a widow with an eleven-month-old baby daughter. The match must not have been one made in heaven as a year later Blanch filed for divorce, claiming that her often-intoxicated husband treated her cruelly and had on one occasion kicked her out of bed.

In 1935, a steel skeletal tower, topped with an automatic light, replaced Barbers Point Lighthouse. No longer needed, the lighthouse was sold by sealed bid in April 1936. The following announcement of the sale appeared in the Ticonderoga Sentinel of April 2, 1936:

FOR SALE  Lighthouse on Barber Point Light Station Reservation, Westport, NY, including a two-story stone dwelling, frame barn and shed. Hot and cold water, all improvements. No reasonable offer refused. Apply Joseph T. Yates, Superintendent of Lighthouses, St. George, Staten Island. If you dont mind the shrill cacophony of a fog horn; the jangle of bells on a stormy night; the piercing beam of a beacon  then, this is positively a real bargain. There are restrictions. You will not be allowed to grow a tree or erect a structure that will obstruct the visibility of the light from any point on the broad expanse of Lake Champlain. For alas, right close by the old lighthouse, there stands a modern beam projector which works scientifically; the lights go on a half hour before sundown and go off a half hour after sunrise.

Since being sold in 1936, the lighthouse and surrounding property have been used as a private residence. The brown-shingled roof has now been repainted a striking white with black trim. A small addition has been added to the rear of the lighthouse, and the old barn, now converted into a garage, stands near the road. The lighthouse is included in the Camp Dudley National Historic District, just south of Westport, New York.

As for Keeper Anderssen, he found a second wife, raised two sons during his twenty-three years at Barbers Point, and then ended his career at Cumberland Head Lighthouse in 1941. An accomplished landscape artist, Anderssen painted this picture of Cumberland Head with its automated light.

For a larger map of Barber's Point Lighthouse, click the lighthouse in the above map.

From Highway 22 south of Westport, turn onto the loop road County Road 22G, also known as Dudley Road. Look for Barber's Lane and go east on it to the lighthouse.