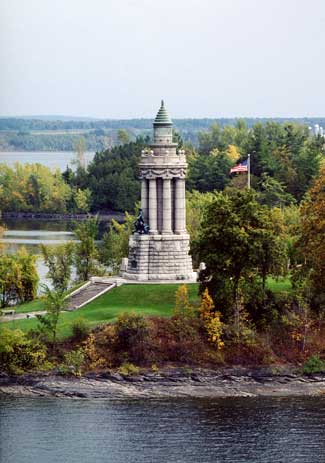 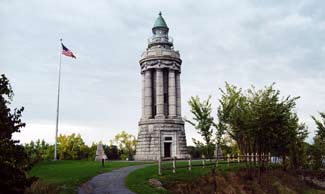 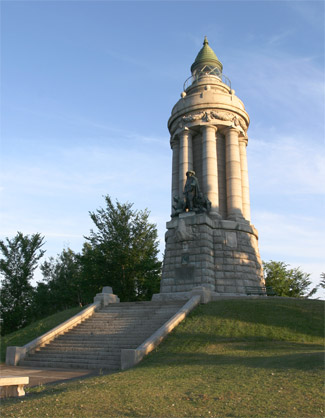 Located at a site steeped in rich history, Crown Point Lighthouse today serves as a monument to the exploration of Lake Champlain. A windmill was the first structure built at the site around 1737 by the French, as part of Fort St. Frederic, but it was blown up in 1759, when the French relinquished the fort to the British. Using the French fort as a foundation, the British built their strongest defense on Lake Champlain, Fort Crown Point. Remains of part of the outer fort, the Grenadier Redoubt, can be seen today, just south of the lighthouse.

During the Revolutionary War, Fort Crown Point was surprised and taken by a detachment of The Green Mountain Boys under the command of Seth Warner. On the same day, Ethan Allen took Fort Ticonderoga, located ten miles south of Crown Point. The British eventually took Fort Crown Point back and held it until the end of the war.

Once peace was established and commerce grew on Lake Champlain, the need for a lighthouse at the point became evident. After surveying the lake, Naval Lieutenant Charles T. Platt issued a report in 1838 recommending the establishment of lighthouses at Windmill Point, Vermont and Crown Point, New York. Steamboat masters had been keeping temporary lights on both these points for the previous eight years, but Platt felt these lights were insufficient especially in times of high winds and thick haze, when they were most needed.

In 1853, Henry B. Smith, collector of customs at Plattsburgh reiterated the need for a lighthouse at Crown Point, stating that those best acquainted with navigation on Lake Champlain felt a light to guide vessels through the narrow, one-half-mile-wide channel between Crown Point and Chimney Point was needed more than at any other point on the lake. Congress finally provided $8,000 for the lighthouse on August 3, 1854, but a title to the site was not perfected for a couple of years, delaying the start of construction until 1858.

A sister to Point au Roche Lighthouse and Windmill Point Lighthouse, Crown Point Lighthouse originally consisted of a fifty-five-foot-tall octagonal limestone tower connected to a wooden, Cape-Cod-style cottage. The one-and-a-half story dwelling had a kitchen, pantry, dining room, and parlor on the first floor and three bedrooms upstairs. ONeal and Ellis of Malone and Champlain, New York built the lighthouse, with a subcontract to S. W. Clark & Co. of Willsboro Point for the blue limestone used in the tower. Trapezoidal windowpanes encased the lantern room, from where a fifth-order Fresnel lens first beamed forth a fixed white light at a focal plane of eighty-three feet on the opening of navigation in 1859.

On June 10, 1872, Congress appropriated $1,500 for repairs at Crown Point light-station, which resulted in the erection of a barn and general repairs of the dwelling and grounds.

James Raine enlisted in the 5th New York Cavalry Company in 1861 and rode off to fight in the Civil War at the age of fifty-four. Raine was discharged the following year and returned to Crown Point to become the third keeper of the lighthouse, which would be his home until his passing in 1886. During the winter of 1868, Keeper Raine, assisted by his son, was pulling two of his daughters, eighteen-year-old Mary and thirty-year-old Anna, across Lake Champlain to Chimney Point on a sleigh, when they all broke through the ice. The son was able to climb back atop the ice first and managed to save his father, but the two daughters ended up beneath the sleigh, and their bodies were not recovered until two hours after the accident. Anna left a husband and two small children.

Lafayette Spaulding took charge of the lighthouse after the passing of Keeper Raine, and a local newspaper fully endorsed his hiring: That Mr. Spaulding will have his lamps trimmed and burning (at the proper hours,) no one knowing him will for an instant doubt. The appointment is a good one.

On July 4, 1609, Samuel de Champlain discovered the lake on which his name would be bestowed. A few years before the tricentennial of this event, the states of New York and Vermont each established a commission to determine fitting events to celebrate Champlains discovery. The resulting festivities commenced at Crown Point on Monday, July 5, 1909 with a sham battle, an address by Governor Charles E. Hughes of New York, Indian pageants, and fireworks. Over the next four days, events were held at Ticonderoga, Plattsburgh, Burlington, and Isle La Motte. Among the many dignitaries of note who witnessed parts of the celebration was William H. Taft, President of the United States.

Besides planning the week-long celebration, the commissions from New York and Vermont also desired to erect a suitable and permanent memorial to Champlain. One suggestion that appeared in a local newspapers Letters to the Editor was to convert an existing lighthouse into a memorial. The lighthouses at Windmill Point and Split Rock appeared to be the early front-runners for conversion, but it was Crown Point Lighthouse that, with the blessing of the Lighthouse Service, was eventually selected in 1910. With $50,000 in funds left over from the celebration, work on the memorial to Champlain and the exploration of the lake began.

Using a style popular in Samuel de Champlains time, the limestone exterior of the lighthouse was replaced with eight Doric columns resting upon a conical base made of Fox Island granite imported from Maine. An ornate cornice, parapet, and lantern room were also added to complete the memorial. Parts of the foundation, the interior brick, and the cylindrical shaft holding the spiral staircase are from the original tower, and the space between the old and new towers was filled with concrete.

On the side of the memorial facing the water is a sculpture, crafted by American Carl Heber, depicting Champlain flanked by a crouching Huron Indian and a French soldier. This sculpture stands above the prow of a canoe that was built into the base of the memorial. Roman Bronze Works in Brooklyn cast the sculpture, while Dillon, McClellan, and Beadel designed the monument.

The French donated La France, a bronze bust by Auguste Rodin with an inscription commemorating Champlains exploration of the lake, to be incorporated in the monument. At the dedication of the bust on May 3, 1912, the president of the visiting French delegation remarked, The United States is raising a monument to a Frenchman, and France sends you, through us, her tribute of gratitude. Once more, the two great democracies are thinking and acting in unison. The Rodin is mounted on the memorial below the sculpture of Champlain.

The official dedication of the completed monument, presided over by President William H. Taft, was held on July 5, 1912 and featured remarks by John A. Dix, Governor of New York, and Colonel William C. Sanger. A light with a focal plane of eighty-nine feet above the lake was established atop the memorial lighthouse on August 7, 1912, using a fixed fifth-order lens.

In 1926, the navigational function of Crown Point Memorial Lighthouse was assumed by a skeletal tower erected near the waters edge and control of the lighthouse was turned over to the State of New York. The replacement tower, shown here at the lighthouse depot on Staten Island on July 22, 1926, was shipped up the Hudson River to reach Lake Champlain. The acetylene-powered light atop the red metal tower was sixty-seven feet above the waters surface and had a characteristic of a half-second flash followed by two seconds of darkness. A battery of ten tanks stored in a white tank house at the base of the tower contained a years worth of gas.

With the completion of the nearby bridge at Crown Point in 1929, the usefulness of the modern light was short-lived, and in 1931 the tower was relocated to Windmill Point where it was used to aid anti-smuggling activities. At its new home, the light was paired with a similar one on Rouses Point and used by the customs service to sweep the narrow channel in search of smugglers trying to sneak liquor into the area in violation of Prohibition.

The keepers dwelling attached to the memorial lighthouse was eventually removed after the property was conveyed to New York State. In 2004, Governor George Pataki, speaking at a press conference held at the Crown Point Pier, announced that the state would be providing $730,000 from the State Environmental Protection Fund to fix this historic covered pier to make sure it is handicapped-accessible and at the same time, to restore the historic lighthouse  that has been such an incredible symbol of Crown Point. The restoration of the lighthouse was completed in time for the quadricentennial celebration of Champlains historic voyage held in 2009.

Located just south of the Highway 17/903 Lake Champlain Bridge in the Crown Point Public Campground and across the street from the Crown Point State Historic Site.
Latitude: 44.0299, Longitude: -73.42156

For a larger map of Crown Point Lighthouse, click the lighthouse in the above map.

From the New York side of the Highway 903/17 Lake Champlain Bridge, exit into Crown Point Public Campground, where you will find the lighthouse. The campground can be reached at (518) 597-3603.

The lighthouse is owned by the New York State Department of Environmental Conservation. Grounds open, tower open in season.