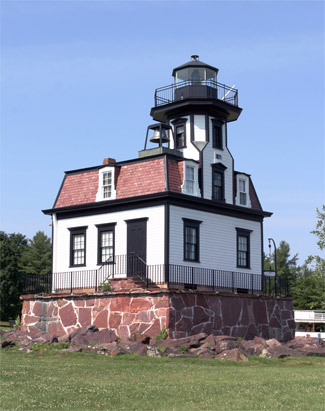 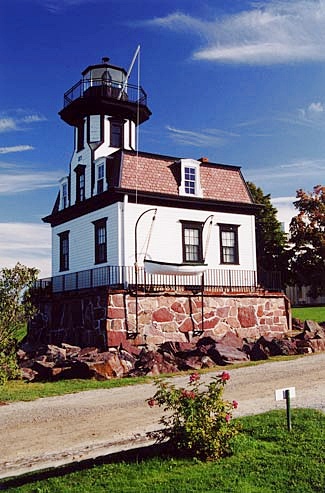 Peacefully resting on manicured grounds, Colchester Reef Lighthouse is spending its retirement at Shelburne Museum, seven miles south of Burlington, Vermont, but life was not always so easy for this quaint, little lighthouse.

In 1869, when lumber transportation was at its peak on Lake Champlain, the Lighthouse Board recommended the construction of a lighthouse on Colchester Reef, southwest of South Hero Island, to mark a group of three dangerous shoals. The reef is located approximately a mile out into the lake from Colchester Point, and roughly seven miles northwest of Burlington.

The lighthouse, designed by Albert R. Dow, a graduate engineer from the University of Vermont, was constructed by Luther Whitney in 1870  1871 at a cost of $24,500  the most expensive light built on Lake Champlain. A national contest for lighthouse design had been held in 1869, and Dows was the winning entry. The plans had four bedrooms on the top floor, and a kitchen, sitting room, and oil room on the bottom floor.

The lighthouse was situated on a rock known as Middle Bunch, which had seven feet of water over it at low water, and deep water on either side. A wooden crib was constructed in Burlington, hauled to the site, sunk on the rock, and then filled with concrete and stone to form the foundation for the lighthouse. Before abandoning the work at the end of the 1870 season, two courses of cut stone were laid atop the crib to bring the work above the water level, and the work was then ballasted with heavy blocks of stone to prevent it from being moved by ice floes.

When the ice broke up in the spring, it tore away the ballast stones and part of the second course of cut stone. Some of the cut stone was recovered, but 481 feet of additional stone had to be procured which increased the cost of the lighthouse and forced Congress to provide an additional $4,500 to go along with the $20,000 it had appropriated in 1870. The foundation pier was completed by the end of June 1871, and the lighthouse followed suit a few months later.

Built in the Second Empire style, the lighthouse featured an octagonal tower projecting from its Mansard roof and displayed a fixed red light from a sixth-order Fresnel lens. With a focal plane of fifty-one feet, the light was visible for eight miles.

Storms and ice jams often battered the lighthouse, and life in the small dwelling could be lonely, especially during the winter. Waves churned up by a violent storm in mid-January 1873 struck the lighthouse with such force that the lens was thrown from its pedestal and Keeper Heman Malaney feared for his safety. That same winter, ice threatened the stations foundation, prompting the Lighthouse Board to request funds for riprapping the pier with large stones. Congress provided $5,000 on June 23, 1874, and a protective enrockment was put in place during the summer of 1875. An additional 300 tons of riprap were placed about the pier in 1895.

Supplies were brought to the reef once a year by a lighthouse tender out of Staten Island. The Lighthouse Board determined the amount of supplies needed, whether or not the keeper requested more or less. Keeper Malaney insisted that he did not need the nine tons of coal that were brought to him each year, but nine tons of coal he got. Each winter, local ice fisherman knew that a visit to the lighthouse would bring them a bag of coal for use in their shanty stoves.

When Keeper Malaney retired in 1882, he was replaced by his assistant, Walter Button, who brought his family to live at the station. Five different assistants had served under Keeper Malaney during the eleven years he was in charge of the lighthouse, but when Walter Button was promoted to keeper, the position of assistant keeper was eliminated.

On January 29, 1888, Keeper Buttons wife Harriet went into labor, and Walter promptly rang the fog bell, a prearranged signal for someone on shore to notify the doctor. The doctor and his assistant reached the shore just as it was getting dark and found a perplexing scenario  ice too thin to cross, and not enough open water to get a boat through.

The pair decided to risk it and began to cross the ice on foot. When they were about halfway to their patient, a large floe cracked clear of the main section, leaving the two men stranded. Their floe drifted north, and then began to break into smaller and smaller pieces. Jumping from floe to floe to save their lives, the two finally reached safety on the shores of South Hero Island, four miles from where they began their journey.

Myrtle Edna Button was born that night without the doctor.

August Lorenz, a six-foot-tall, 200-pound man who enjoyed his solitude, took on the job of keeper of Colchester Reef in 1909. While living in New York City, Lorenz had dreamed of the pastoral life. He struck up a correspondence with William Howard, the Colchester Reef Lightkeeper at the time who longed for the city. The two decided to switch jobs and met halfway between to trade their tools.

The same year Lorenz became keeper, a fog bell was placed in operation at the lighthouse. Machinery struck the bell two, quick blows, waited thirty seconds, and then struck another two blows.

Once a week, Lorenz would row across the lake, 4 ½ miles to Port Kent or 6 ½ miles to Port Douglas, to pick up supplies. One dreadfully cold day in late autumn, he had loaded his dory with supplies and was headed back home when a combination of an east wind and lake spray worked to form a thin coat of water on his back. Lorenz kept rowing, unaware that with only the movement of his arms, the coat of water had frozen and then grown thicker and thicker with each new layer of spray that landed on his back. By the time he reached the lighthouse, the sheath of ice was so thick that Lorenz was frozen fast to his dory. Fortunately, he was carrying a knife, and eventually freed himself by chipping away the ice.

Ice again found Keeper Lorenz one night when he was working in the lantern room and heard a huge crash and the splintering of wood. After dashing downstairs, he found the southwest corner of the lighthouse split open by the pressure of tons of ice. Huge pieces of ice protruded through the opening and flooded the kitchen floor, but within a few minutes, the wind reversed, the ice slid back, and all that was left of the near disaster was a gaping hole in the kitchen wall.

Lorenz loved the quiet solitude he found at the reef. He stayed on as keeper for twenty-one years, until forced into retirement in 1931 at the age of seventy. Leaving the station broke his heart, and he passed away shortly thereafter.

Colchester Reef Lighthouse was also about to retire. Joseph Aubin, the last keeper, turned off the light and closed the doors in August 1933, after a battery-powered beacon was installed on the exterior of the lighthouse to serve mariners.

The abandoned lighthouse eventually fell into disrepair and was auctioned off in June 1952 with the provision that the structure be removed from the pier within thirty days to make room for a thirty-foot skeletal tower. Paul and Lorraine Bessette, a young couple, submitted the high bid of $50, with plans to raze the eighty-one-year-old lighthouse and use the lumber to build a house in Essex. Electra Webb, collector of New England memorabilia and founder of Shelburne Museum, soon heard of the sad fate awaiting the historic structure and purchased the lighthouse from the Bessettes for $1,300 plus building materials for their new home.

The timbers used in the stairway, doors, and windows were all numbered before the lighthouse was disassembled, so it could then be painstakingly re-erected, piece by piece, on the grounds of Shelburne Museum in the fall of 1952. A plaque on the lighthouse recognizes the efforts of the six men responsible for relocating the structure. Three years later, the lighthouse was joined at the museum by another relic from Lake Champlain, the triple-decked, sidewheel steamer Ticonderoga, which had been carrying passengers for nearly fifty years.

To complete the lighthouse display, the Coast Guard later presented the museum with a Fresnel lens, bronze fog bell, and clockwork mechanism for striking the bell. A modern post light was placed atop the crib to replace the lighthouse.

Life for Colchester Reef Lighthouse at Shelburne Museum has remained fairly calm, with one exception. In June 1961, the lighthouse was struck by lightning, but fortunately it only incurred minor damage.

For a larger map of Colchester Reef Lighthouse, click the lighthouse in the above map.

The lighthouse is owned by Shelburne Museum. Grounds/lighthouse open to museum visitors.


A visit to Shelburne Museum is a unique experience. The admission price might be considered steep if all you want to do is visit the lighthouse, but there are several other structures and exhibits worth seeing. Mrs. Webb, the founder of the museum, had an eye for seeing the beauty in everyday objects and buildings. On the grounds of the museum, you will find both a circular and a horseshoe-shape barn, a two-lane covered bridge, an old church, a train station, and the beautifully restored steamship Ticonderoga, which appropriately is located next to Colchester Reef Lighthouse. You can easily spend several hours exploring the museums eclectic collection, which provides an exceptional sampling of Americana.