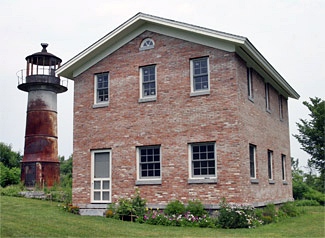 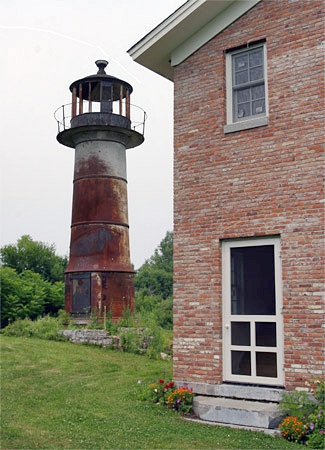 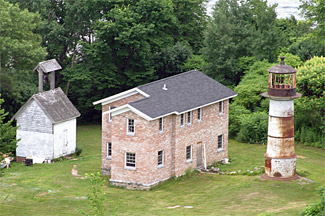 Samuel de Champlain was the first European to record seeing the lake that now forms the boundary between upstate New York and Vermont. In July 1609, Champlain and two of his men sailed down the 120-mile-long lake, upon which Champlain had bestowed his name, in company with Algonquin Indians on their way to battle the Iroquois.

During the next two centuries, several countries battled for control of the important waterway. After the final naval conflict of the War of 1812, fought on September 11, 1814, and the construction of the Champlain Canal in 1823, which linked the lake to the Hudson River, Lake Champlain became a major passageway for iron ore and lumber.

Lights were needed to guide vessels on their way, and private beacons were set up around the lake without much rhyme or reason.

Seeing the need for an organized system, Congress allocated funds on March 3, 1825 for the first lighthouse on Lake Champlain, which would serve to direct vessels into the growing port at Burlington. The State of Vermont purchased Juniper Island, located just over three miles offshore from Burlingtons waterfront, for $200 from Moses Catlin, and then ceded the island to the federal government. Juniper Island rises steeply out of the waters of Lake Champlain, but then levels off providing relatively flat terrain ideally located for a light to mark Burlington Harbor.

The original Juniper Island Lighthouse was a thirty-foot-tall conical brick tower, and its light, consisting of an array of ten lamps backed by reflectors, was lit for the first time on May 11, 1826. The lighthouse replaced a light mounted atop a pole that had been erected by a commercial shipping company. Frederick A. Sawyer was hired as the first keeper of the light, but after three years he was replaced by Malachi Corning, a veteran of the War of 1812. After faithfully serving as keeper for twelve years, Corning received the following terse letter from the Secretary of the Treasury on April 16, 1841: Your services as keeper of the Light House on Juniper Island are no longer needed by the Government. Corning, a democrat, was apparently a victim of the recent election that saw William Henry Harrison, a whig, replace Martin Van Buren, a democrat, as President of the United States.

The workmanship on the original tower must have been inferior as by 1838 the lighthouse was in disrepair. Lieutenant Charles T. Platt described the condition of the structures on the island that year and requested $500 to correct the deficiencies: The light-house is much out of repair; the stairs want rebuilding; the window-frames are completely decayed, and the exterior wants a coat of Roman cement. The dwelling wants painting, (the wood-work, inside and out.) A new pier is also required for the safe landing of boats.

A new tower was built on the island in 1846, consisting of four cast-iron rings stacked to form a thirty-foot-tall cylinder that was topped with a sixteen-pane lantern room. A white, two-story dwelling was subsequently built and attached to the tower by a short passageway. The iron tower is similar to Monomoy Point Lighthouse and is the oldest surviving cast-iron lighthouse in the United States.

A fourth-order Fresnel lens replaced the array of lamps and reflectors in 1856, changing the characteristic of the light from fixed white to fixed white varied every three minutes by a brilliant flash and a short eclipse. Located atop precipitous shale cliffs, the light had a focal plane of ninety-five feet above the lake and was visible for fifteen miles. Along with the new lens, Juniper Island also received a fog bell that was mounted atop a wooden shed and could be automatically rung by a clock mechanism every fifteen seconds when needed.

On March 3, 1871, Congress allocated $3,500 for a suitable landing and boat-house at Juniper Island, and these works were completed later that year. The frame for the fog bell was rebuilt in 1874, using a part of the $1,000 appropriated for the station by Congress on June 23, 1874.

The islands old wharf was remodeled and extended eighty feet in 1893, and a combined boathouse and buoy shed was built at its inshore end. This improvement allowed Juniper Island to serve as a depot for the lighthouses and buoys on Lake Champlain. Annual supplies were brought to the island from the general depot and then distributed around the lake by small, light-draft tenders.

In 1867, an assistant keeper was assigned to Juniper Island to help with the workload. Peter J. Kirby was serving in this capacity in September 1902, when he and his wife took their three-year-old daughter to Burlington for the weekend. While they were staying in W.B. Cravens hotel, the daughter was playing near the window of their second-floor room when she pushed against the screen and it gave way, causing her to fall twelve feet to the pavement on Mechanics Lane. A physician was called to exam the girl, and he found that the girl had no broken bones or internal injuries.

In late January 1903, Assistant Keeper Kirby made the three-mile trek over the ice to Burlington to get medicine for his sick wife and child. Kirby had planned to return to the island the next day, but the ice went out and he was taken suddenly ill. A friend was finally able to get word to Kirbys wife, who was able to visit her husband in the hospital before he passed away of tuberculosis on Valentines Day.

Just a year after losing his assistant, Keeper Guyette and his wife had a frightful experience trying to reach Burlington in a rowboat. The following account of the incident was carried in the Boston Sunday Globe of January 3, 1904:

Accompanied by his wife, Capt. Frank Guyette, keeper of the lighthouse on Juniper island in the lake, started on a four-mile row to Burlington this afternoon. After proceeding a short distance the captains boat ran into a floe of drifting ice cakes, which nearly capsized the small craft. The progress of the boat was constantly hampered, and it was with the greatest difficulty that Guyette was able to make any headway. The cold was intense, the captains hands and feet became frozen, and Mrs. Guyette was obliged to take her husbands place at the oars. She managed after a hard struggle to bring the boat to shore.

It is believed that the Guyettes will be unable to return to Juniper island for some days. The light is not operated during the winter season, but fears are entertained that the livestock will perish, as no one is left on the inland to care for it.

This wasnt the first time Guyette had difficulty getting on or off the island. While serving as assistant keeper in February 1893, he received news that his son Merton had died suddenly in Houston, Texas. Merton had been suffering from consumption the previous winter and had been advised to go West. Due to the size of his family, Guyette didnt have the money to send his son West, but the Ladies Aid society of Camp Gen. William Wells, No. 19 stepped in to raise the funds for the son of the Civil War veteran. Guyette went to Burlington to wire instructions to have his son buried in Houston, and then while returning across the ice, he fell twice. The first time, he sprained his right wrist, and the second time, he broke his left arm.

Herbert L. Perry was serving as head keeper of Juniper Island Lighthouse, when a strong storm struck the island in 1918. Perry communicated the damage inflicted at the station in the following one-sentence letter sent to the district inspector: I thought I would write to inform you that gale of wind from North West carried away 30 feet of old dock also washed off dock, 8 big sinkers also 2 spar buoys old ones, this December 1st 1918, at 3:30 A.M. in the morning.

The lightkeeping era on Juniper Island ended on 1954, when an automated light atop a sixty-foot steel skeleton tower replaced the old iron lighthouse. Two years later, the ten-acre island was sold at auction, with the highest of the eight bids being a $7,000 offer submitted by the Fayette & Deschenes law firm of Burlington. The Coast Guard retained roughly 4,000 square feet surrounding the light tower and entry rights to tend the automated light.

Tragically, the keepers dwelling was severely damaged in 1962 by an uncontrolled campers fire, but the iron tower and wooden bell house fortunately survived. The scorched dwelling slowly crumbled away over the years until just an outline of the foundation topped in places by a few rows of its reddish bricks remained. Following the death of Fred Fayette in 1974, Juniper Island passed to his twelve children. In late 2001, the Fayette family started to reconstruct the dwelling using 17,890 bricks salvaged from the original structure. The iron tower was restored and painted by 2013.

Several lighthouses on Lake Champlain have had lights returned to their lantern rooms, starting with Windmill Point Lighthouse in 2002, but it is doubtful that the old tower on Juniper Island will be reactivated as dense brush and foliage makes only the tip of the tower visible from the lake. The modern Coast Guard tower on the island will have to serve mariners for now, but just a few yards away, the oldest light station on Lake Champlain has been reborn.

For a larger map of Juniper Island Lighthouse, click the lighthouse in the above map.

Due to vegetation, only the very top of the tower is visible from the lake.

The lighthouse and island are privately owned. Grounds/dwelling/tower closed.