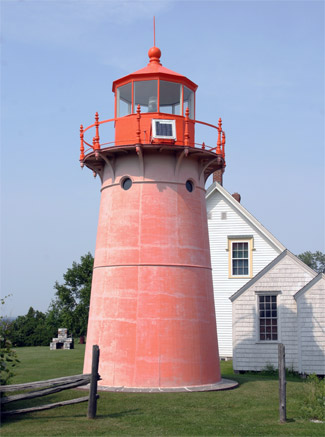 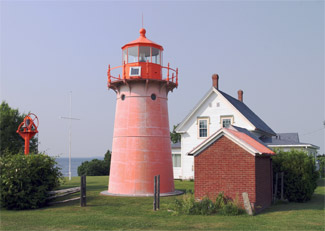 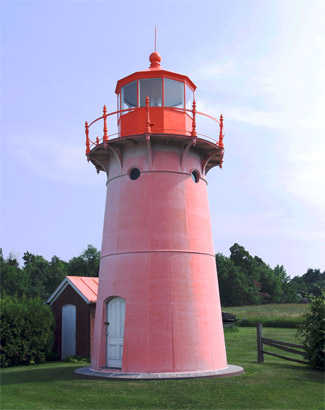 In 1666, French Captain Pierre de La Motte established the first European outpost on Lake Champlain  a fort located near the present day Saint Annes Shrine. Several years earlier, Samuel de Champlain had set foot on Isle La Motte during his exploration in 1609 of the lake that now bears his name. In 1967, F.L. Weber sculpted a seventeen-ton statue of Champlain in the Vermont pavilion during the Montreal Expo, and afterward the monument was donated to Isle La Motte and placed near St. Annes Shrine. A century and a half after Isle La Motte was settled, a lantern was hung from a pine tree east of the old fort in 1829, creating the first navigational light on Isle la Motte. The light was later moved to the upper window of a nearby stone house.

In 1853, Henry B. Smith, collector of customs at Plattsburgh, New York, recommended that the Lighthouse Board spend $5,000 to erect a lighthouse on the northern end of Isle La Motte. That same year, William D. Fraser of the Corps of Engineers reported that lighthouses were needed on Lake Champlain at Windmill Point and Crown Point along with small bug lights on Burlington Pier and on Isle La Motte, which would cost but $500 each. The plan for a small light on Isle La Motte was selected, and in 1856, the U.S. government purchased a parcel of land on the island for $50.

The private light formerly maintained on Isle La Motte by a steamboat company was replaced with a limestone tower supporting a large lens lantern. The conical tower rested on a rectangular base, where it had a diameter of five feet, and rose to a height of eighteen-and-a-half feet, where its diameter was two-and-a-half feet. An iron ladder mounted to the outside of the hollow tower provided access to a walkway that encircled the lantern. A local farmer was paid to tend the light, but on stormy nights, when the light was so critical, the lamp would often blow out.

In its annual report for 1868, the Lighthouse Board wrote the following about the light at Isle La Motte:

It is proposed to build a dwelling with a lantern on top, from which to exhibit the light. The land necessary for the site is now in possession of the government, and an estimate of the cost of the requisite structure is submitted. Three years, the Lighthouse Board added, the distance between the residence of the keeper and the beacon is too great to secure proper attendance, and requested $8,000 to build the keepers dwelling surmounted by a light tower.

Authorization for a lighthouse was granted in 1879, but instead of a light atop a dwelling, a twenty-five-foot-tall tower made of curved cast-iron plates was erected along with a detached one-and-a-half-story keepers cottage. The tower, similar to those now at Point Montara, California, Sunken Rock, New York, Crossover Island, New York, and Ten Pound Island, Massachusetts, held a sixth-order Fresnel lens, which shone a fixed white light at a focal plane of forty-six feet. Keeper Wilbur F. Hill exhibited the light for the first time in 1881. The brick oil house was added to the station in 1906.

Keeper Hill was well acquainted with Isle La Motte. His service there began in 1871 at the old beacon and continued for forty-eight years until his retirement in 1919 at the age of seventy-six. Along with serving as keeper of the station, he also maintained a 100-acre farm nearby. In 1915, Keeper Hill was commended for towing ashore a disabled boat with three people in it.

The iron tower, originally painted bright red, has an Italianate cast railing, porthole windows, and molded cornices. Over time, it has faded to a light pink, called Nantucket red by the locals.

When work on the lighthouse was underway in 1880, a local landowner claimed ownership of the lighthouse lot and objected to its occupation without proper remuneration by the government. To this claim, the Lighthouse Board responded:

The land has been in the undisputed possession of the government for more than twenty years, and the claim to ownership is undoubtedly made to extort money from the United States. The only basis for the claim is the fact that an informality has occurred in the matter of recording the deed to the government, and this is more due to the town clerk of Isle La Motte than anyone else.

As part of a cost saving measure in the 1930s, the Lighthouse Service replaced many of the lighthouses on Lake Champlain with steel skeletal towers. One such tower, with a a tank house at its base and topped by an automatic beacon, was erected on Isle La Motte light in 1933, and the lightstation was sold into private hands.

One day Erika Clark was having a dental checkup in Chazy, New York, just across Lake Champlain from Isle La Motte, when her dentist asked if her father would be interested in purchasing Isle La Motte Lighthouse. The answer turned out to be yes, and Robert C. Clark acquired the lighthouse in 1949 from Nelson Hill, a relative of the Clark familys dentist. The Clarks, then consisting of Robert and his two children, Lockwood and Erika, had previously enjoyed a small camp on Isle La Motte near St. Annes Shrine and were happy to acquire a larger parcel on the island.

In 2001, the Coast Guard considered the cost of replacing the deteriorating steel tower at Isle La Motte and determined it might be more cost effective to return the light to the original tower. With the cooperation of the Clark family, the lights at Isle La Motte and Windmill Point were returned to their rightful place atop the historic towers. The pedestal for the light had been removed from Isle La Motte Lighthouse, so the Clarks used the one left at Windmill Point as a pattern for building a new one for Isle La Motte. The Clarks also crafted and installed the mount and conduits for the solar panels needed at each of the lighthouses.

After almost seven decades of darkness, Isle La Motte Lighthouse was restored to active service on October 5, 2002. The event was witnessed by a crowd of over 300, and the actual lighting was accompanied by the firing of a cannon and the vigorous tolling of a nearby bell by Lucky Clark. The light was relit by the schoolchildren of Isle La Motte led by Lois Cameron, great-granddaughter of Keeper Wilbur Hill, who first lit the light in the current tower in 1881. To cap off the program, the crowd joined in singing This Little Light of Mine.

In a January 2014 press release, the Coast Guard announced their intention to demolish or remove the metal towers at Split Rock and Isle La Motte: Both towers are of an obsolete design that does not meet current Coast Guard requirements for aids to navigation structures and are unsafe for Coast Guard personnel to climb for maintenance. Both towers present a safety hazard to persons on adjacent private properties and both towers present an environmental hazard due to deteriorating paint. Neither of the towers is an active aid to navigation. A deadline of May 1, 2014 was set for finding a new owner for the metal tower, but the Coast Guard eventually relented and let the tower at Isle La Motte remain standing.

On October 16, 2018, the Coast Guard installed an LED beacon in the lantern room of Isle La Motte Lighthouse.

For a larger map of Isle La Motte Lighthouse, click the lighthouse in the above map.

From Highway 2, which runs north/south along the islands of Lake Champlain, turn west on Highway 129 and follow it onto Isle La Motte. Turn right onto Shrine Road and then right onto North Point Road, from where you can get a distant view of the lighthouse.