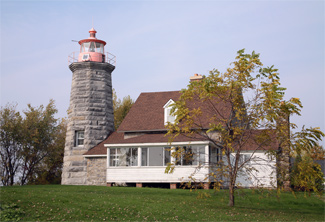 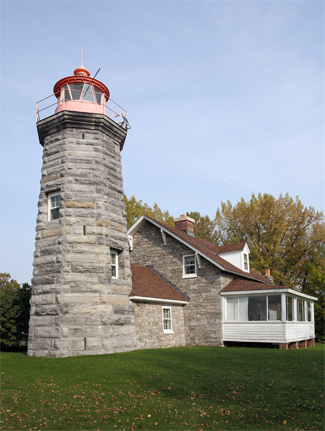 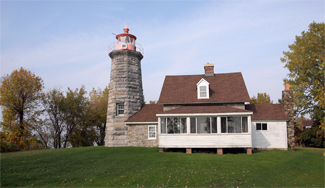 On a small peninsula on the eastern shore of Lake Champlain near Alburgh, Vermont, stands stately Windmill Point Lighthouse. At this peaceful setting, just two miles south of the Canadian border, the waters gently lap against the shore. The point takes its name from a stone windmill built by the French, who settled the area in the 1740s. During the Revolutionary War, the radeau Thunderer sunk off Windmill Point in 1777, while carrying wounded British soldiers from the defeat the British had suffered at the Battle of Saratoga.

A private light was established at the point in 1830, but in 1838, Lieutenant Charles T. Platt of the U. S. Navy submitted the following recommendation for an improved light on Windmill Point and additional lights on Lake Champlain.

I find on my surveys of this lake, (and I may add from my own experience during the war,) that there are other points requiring beacon-lights, which the safety, with the rapidly increasing commerce of this lake, makes indispensably necessary; and to that end I have made the necessary examinations and surveys, and have fixed upon sites at the following points, viz: Windmill point, Vermont State, and Crown point, New York State. To make manifest the importance of establishing permanent lights at the above points, I will merely state that temporary lights have been kept at either point for the last eight years, and at the individual expense of the steamboat masters. These lights, however, are frequently found insufficient, and that, too, at a time when they are most required. For instance, during a strong wind, which is not unfrequently the case, accompanied with thick hazy atmosphere, a brilliant beacon-light would render safe the navigation at the aforesaid points, which, under existing circumstances, is often exposed to serious disasters from hidden rocks and the serpentine course of the channel.

With this view of the subject, I respectfully submit a plan and estimate for the location of a dwelling, with lantern on top, at each of the before-named points. The site fixed upon for the building at Windmill point, is thirty feet south of the remains of an old windmill at that place, and a short distance south of the line dividing the United States from Canada.

No action was taken on Platts recommendation until 1853, when William D. Fraser of the Corps of Engineers solicited input from pilots and others interested in navigation on Lake Champlain regarding the need for additional lights. Based on the feedback he received, Fraser echoed Platts request made fifteen years earlier that lighthouses should be built at Windmill Point and Crown Point. The estimated cost of each lighthouse was $8,000, and Congress supplied this amount for Windmill Point Lighthouse on August 3, 1854.

After title to the desired land on Windmill Point was cleared in May 1857, contractors Ellis and ONeil of Malone and Champlain, New York constructed a forty-four-foot-tall octagonal tower using rough-hewn blue limestone from the quarry of Ira Hill on Isle La Motte. A sister to Point au Roche Lighthouse and the original Crown Point Lighthouse, Windmill Point Lighthouse was equipped with a sixth-order Fresnel lens, which shone a fixed white light at a focal plane of fifty-two feet, making it visible for thirteen miles. A passageway connects the tower to the Cape Cod style keepers dwelling, made of rubblestone.

The first keeper of the lighthouse, which was built in 1858 and activated with the opening of navigation in 1859, was Clarinda Mott, who has the distinction of being the only female lighthouse keeper to have served in Vermont. Clarinda was born in Alburgh, the seventh of nine children born to Joseph and Clarinda Mott, and was fifty-five when she was placed in charge of the lighthouse.

Windmill Point Lighthouse is the northernmost of the Lake Champlain Lighthouses. By drawing a line between the light at Windmill Point and the light at Isle La Motte, a mariner could guide his vessel through a clear channel in the upper narrows of the lake, avoiding numerous reefs and rocks.

In 1891, a summer kitchen was added to lighthouse, an old barn was removed, and a new barn and a fence were built.

The fifth keeper of Windmill Point Lighthouse was Edward Hill, who was born at Isle la Motte Lighthouse where his father, Wilbur Hill, was serving as keeper. Edward Hill served at Windmill Point from 1908 until at least 1921. In 1931, the lighthouse was eplaced by an acetylene light displayed from a black steel skeletal tower with a white tank house at its base that was relocated from Crown Point, New York. The lighthouse property, minus the half-acre surrounding the skeletal tower, was transferred to the U.S. Customs Service for use in the battle against rum-runners on Lake Champlain during prohibition.

Windmill Point lighthouse was subsequently sold to the public and eventually purchased by Lockwood Lucky Clark in 1963, after he stumbled into the owner of the lighthouse while walking on the point with his wife. At that time, it was just another house. The modern enthusiasm for lighthouses was still years away.

Lucky told Emil Bayer, who had purchased the lighthouse in 1949 and resided in Connecticut, that he was welcome to come back and visit the lighthouse, and he did just that a few years later after his wife had passed away. During his stay over Memorial Day, Emil met Erika, Luckys sister, and ended up marrying her in 1968.

Although the Clarks had informal exchanges with the Coast Guard, they had never suggested moving the light back into the tower. Then, during the summer of 2001, Admiral Richard A. Bauman, who had climbed the steps in 680 U.S. lighthouses, visited Windmill Point, and the idea of restoring the light to the tower was born. For nostalgic and historical reasons, the return of the light to the tower is important, but it will also save the Coast Guard money. Tens of thousands of dollars would be required to replace or refurbish the skeleton tower, while moving the light would cost just a few thousand dollars, and the owners of the lighthouse are responsible for maintaining the tower.

Lucky and his son Rob spent many hours readying the lighthouse to receive the modern optic. Then, on August 7, 2002, National Lighthouse Day, Windmill Point Lighthouse was returned to service after seventy-plus years of darkness. The relighting was the first on Lake Champlain. Shortly thereafter, the light was also returned to the tower at Isle La Motte. Similar relightings have since occurred at several other lighthouses on the lake.

On November 15, 2013, a contractor hired by the Coast Guard arrived at Windmill Point to remove the historic sixty-six-foot-tall iron tower. When it sold off Windmill Point Lighthouse, the Coast Guard retained ownership of the skeletal tower and now had decided to dispose of it due to liability concerns. Rob Clark tried unsuccessfully to save the tower, but he at least succeeded in salvaging the base and upper portion of the tower. Using his skill as a welder, Rob combined the two pieces to create a shorter version of the tower that remains on the property as a reminder of the period when the light was not exhibited from the stone lighthouse. On October 16, 2018, the Coast Guard installed an LED beacon in the lantern room at Windmill Point.