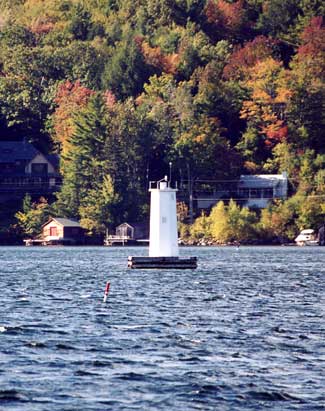 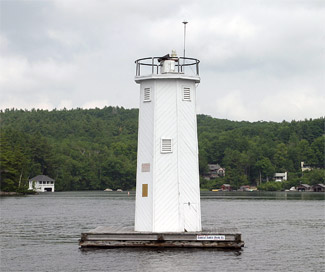 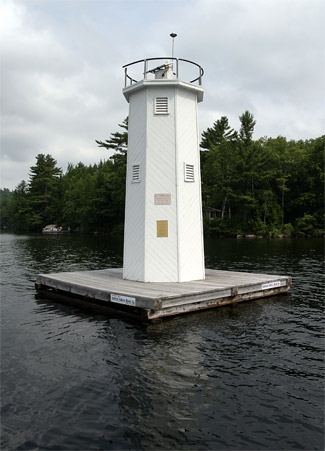 Lake Sunapee, at an elevation of 1,093 feet, is a shimmering peaceful lake. Tree-lined shores and quiet coves greet those who come to get away from it all. At the southern end of the lake, 2,700-foot Mount Sunapee, home to a downhill skiing resort, peers down on the serene setting.

Beginning in the 1870s, folks from New York, New Jersey, and Connecticut spent their summers frolicking at the lake. Soon, it became a Mecca for the affluent. Grand resort hotels and family estates dotted the shores. Travelers came by train to Sunapee Harbor then boarded steamships for their final destination.

When steamship service on the lake ended following the Great Depression, the lighthouse was left to deteriorate. Crushing ice destroyed the lighthouse in 1936.

The 1980s brought a renewed interest in the lights, and in 1983 funds were raised to rebuild both the crib and lighthouse. Solar panel lights were installed in the mid-1980s.

Ice strangled the lighthouse again in 1994 severely damaging the crib, and for the second time, the crib was rebuilt.

The lighthouse is owned by the State of New Hampshire and is maintained by the Lake Sunapee Protective Association. The plaque on the lighthouse reads:

For a larger map of Burkehaven Lighthouse, click the lighthouse in the above map.

The lighthouse is owned by New Hampshire Marine Patrol Bureau and maintained by the Lake Sunapee Protective Association. Tower closed.