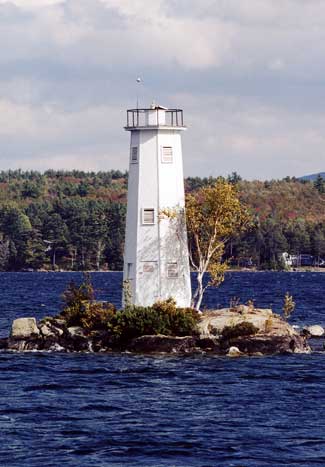 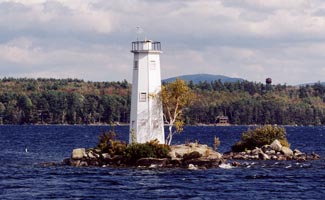 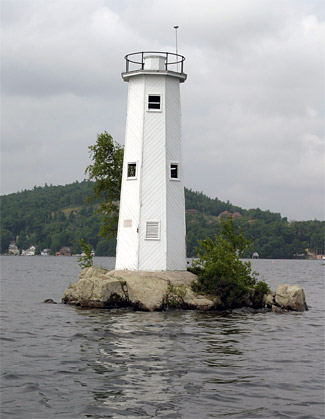 Named an Algonquin word meaning wild goose lake, Lake Sunapee is a long, narrow lake stretching ten miles from north to south. In the late nineteenth century, the beautiful lake became a popular destination for travelers from New York, New Jersey, and Connecticut. The city folk arrived by train to Sunapee Harbor and then boarded steamships bound for the swank resort hotels and family estates sprinkled along the shoreline.

In 1891, the steamer Edmund Burke struck an underwater ledge at Loon Island. The accident led to the construction of a lighthouse on this small island near the middle of the lake. The wooden tower was built in 1893 by the Woodsum brothers, owners of the lake's steamships, at a cost of $400. In 1896, the lighthouse ironically caught fire when the fire department was working on repairs. Using just the one bucket they had, the firemen extinguished the fire with lake water, and finished their repairs.

The tower was struck by lightning in 1960 and burned down. It was rebuilt that same year, after a fund drive for private contributions. In the 1980s, solar panels were installed in the lighthouse.

The Great Depression of the 1930s took its toll on Lake Sunapee, and as tourism declined the steamboats and grand hotels disappeared. Though steamboats full of summer travelers no longer cruise the lake, Loon Island Lighthouse still guides the watercraft that use the lake for recreation.

Today, the lighthouse is owned by the State of New Hampshire and is maintained by the Lake Sunapee Protective Association.

For a larger map of Loon Island Lighthouse, click the lighthouse in the above map.

The lighthouse is owned by New Hampshire Marine Patrol Bureau and maintained by the Lake Sunapee Protective Association. Grounds/tower closed.


You can get distant views of Lake Sunapees three lighthouses from roads that run along the lakeshore, but the best views come from the water. The cruise we took on a crisp, fall day aboard the Mt. Sunapee II was relaxing and informative. The vessel passes quite close to two of the three lighthouses, and the distant view of the Burkehaven Lighthouse isnt too bad. While the ship circles the lake, the captain provides a good historical narrative and points out the sites where the lakes resorts once stood. Some of the modern homes that border the lake qualify as resorts in my book. Sunapees most famous residents might be two members of Aerosmith, who met at the lake while summering there with their parents and went on to form the notorious band.