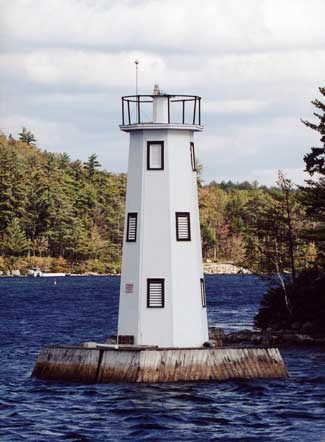 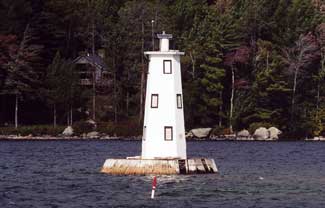 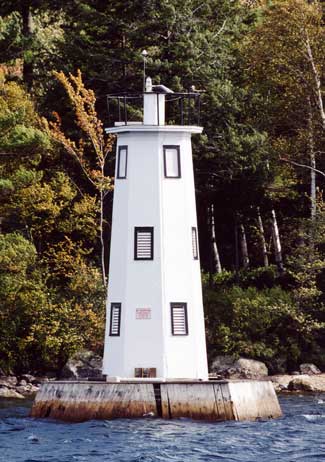 On the clear cool waters of Lake Sunapee, marking the entrance to Herrick Cove, stands a white wooden hexagonal lighthouse, which before its restoration in 2004 sported black trimmed panes.

During the late 1800s, Lake Sunapee, New Hampshires sixth largest lake, attracted wealthy folk escaping the oppressive summer heat and hectic life of the city. Families and servants traveled by train to Sunapee Harbor, then boarded steamships to reach the posh hotels and family estates that dotted the shoreline.

Herrick Cove lighthouse was built in 1893 by the Woodsum brothers, owners of the lakes steamships.

When the Great Depression hit, and the grand era ended, the lighthouse was left to deteriorate. In 1965, the tower was refurbished. Some ice damage was repaired in 1983, and around the same time, a solar powered light was installed.

In the autumn of 2003, the tower, which is the only one of the three lighthouses on Lake Sunapee that has not been replaced, was airlifted off its base by a helicopter, so that repairs could be made to the rotting wooden crib and the tower itself. The weight of the lighthouse had been estimated to be around 3,300 pounds. However, when the helicopter started to lift the structure skyward, it was quickly evident that the tower weighed more than estimated, roughly 1,000 pounds more, as the lighthouse took an unexpected dip into the lake. The helicopter fortunately had a lifting capacity of 5,000 pounds and was quickly able to raise the lighthouse out of the water and deliver it to the lawn of Court Cross, chair of the Lake Sunapee Protective Association's lighthouse committee.

Court Cross' daughter, Ginger Cross Shaw, died in an avalanche in 1996 while heli-skiing in Wyoming. In her memory, many contributions were made to the Lake Sunapee Protective Association (LSPA), and when it was determined that Herrick Cove Lighthouse would require extensive repairs, the Cross family decided to apply the donations towards restoring the tower.

A new crib for the lighthouse was constructed by Rick Green, a local contractor, while George Neuwart was in charge of the tower restoration. The rotted components of the tower's framework were replaced, and in July 2004, the framework and a 700-pound top piece were lifted by helicopter to the restored crib, where the lighthouse was covered with modern maintenance-free panels. The following plaque was placed on the restored lighthouse:

Herrick Cove Lighthouse, now also known as Ginger's Light, is owned by the State of New Hampshire and is maintained by the Lake Sunapee Protective Association.

For a larger map of Herrick Cove Lighthouse, click the lighthouse in the above map.

The lighthouse is owned by New Hampshire Marine Patrol Bureau and maintained by the Lake Sunapee Protective Association. Tower closed.