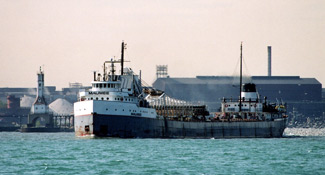 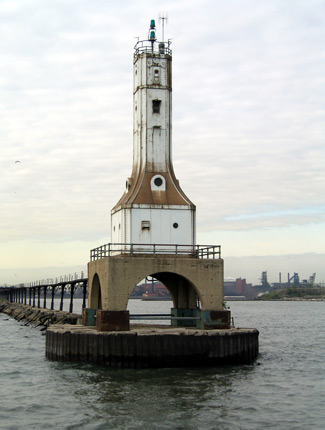 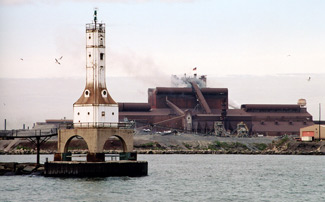 According to the Northwest Ordinance of 1787, the southern boundary of the State of Michigan was to be a line drawn from the southern tip of Lake Michigan east to Lake Erie. The maps of that day had the southern end of Lake Michigan positioned a little farther north than it really is, and as a result the line drawn from the southern end of Lake Michigan to Lake Erie put Toledo and the mouth of the Maumee River in Ohio. When this error was discovered, the Toledo War erupted as Michigan declared its intention to take Toledo. Congress stepped in to resolve the conflict and awarded the Upper Peninsula to Michigan, if it would renounce its claim on Toledo. Accordingly, Michigans southern border was set to be roughly ten miles north of the southern tip of Lake Michigan, and as a result Indiana gained several miles of valuable lakefront property. This proved quite fortunate for Indiana, as during the early 1900s the southern shoreline of Lake Michigan became the site of major industrial development. Several industries were established in the area to reap the benefits of access to the Great Lakes, multiple railroads, and the rapidly growing city of Chicago.

On March 26, 1901, Inland Steel Company accepted an offer by Lake Michigan Land Company of fifty acres of free dune land near East Chicago along with a promise that a harbor and railroad would be built at the site, if Inland Steel would agree to construct a steel plant there that would cost no less than one million dollars. Inland Steel divested itself of Inland Iron and Forge Company for $500,000, and then raised another $500,000 to fund the project.

During 1901 and 1902, Indiana Harbor was dredged and a breakwater constructed. In 1903, work began on a canal that would eventually lead from Indiana Harbor inland to both the Grand Calumet River and Lake George. Over the next several years, numerous industries were established along the waterway. Inland Steel built its plant on the east side of Indiana Harbor, and in 1917, Mark Manufacturing built its East Chicago mill on the west side of the harbor. Clayton Mark, the namesake owner of the company, built a company housing community near the mill, and not surprisingly named it Marktown. Soon Marktown was an oasis amidst all the industry, as a tin mill, rolling mill, and a refinery were also built nearby. For an interesting series of aerial views showing the development of Indiana Harbor around Marktown, click here.

In 1907, a bill was presented in Congress to authorize the establishment of a lighthouse and fog signal at the northerly end of the pier at Indiana Harbor at a cost not to exceed $50,000. When asked to review the matter, the Lighthouse Board responded that the location of the harbor at the southern end of Lake Michigan did not merit a coastal light, and since the harbor was privately owned, the owners should build and maintain any needed pierhead lights and beacons.

The first lights to mark Indiana Harbor consisted of a pair of skeletal metal towers set atop an enclosed base. One structure was placed at the outer end of a breakwater in 1911, while the other was set 615 feet shoreward on the same breakwater to form a set of range lights for guiding vessels into the harbor.

In 1914, the federal government assumed responsibility for Indiana Harbor and the canal, and an act of June 12, 1917, appropriated $100,000 for the establishment and improvement of federal aids to navigation at Indiana Harbor. A stone-filled crib topped with concrete was built along with 810 feet of the east breakwater under contract by Great Lakes Dredge & Dock Co of Chicago, and a reinforced concrete lighthouse measuring forty-four by sixty-five feet and with a height of twenty feet was built atop the crib. This major light was activated on May 2, 1924, but two smaller automatic acetylene lights, set atop thirty-one-foot-tall steel towers, had been established earlier. The one to mark the east pierhead went into operation on June 5, 1920, and the one to mark the west breakwater commenced operation on July 14, 1923.

The Bureau of Lighthouses provided the following description of the new East Breakwater Lighthouse:

The East Breakwater Light and Fog Signal Station is a two-story building having reinforced concrete frame with brick curtain walls, surmounted by a fog-signal apparatus room, kitchen, keepers office and boathouse. The second floor is divided into four bedrooms, bath, and storage room. The foundation is of heavy reinforced concrete, 20 feet high and 44 by 65 feet in plan, providing ample deck room around the house, as well as interior accommodations for coal and oil storage, heating plant, and the air compressor plant for the fog signal. This foundation rests on a heavy stone-ballasted timber crib, forming the outer terminus of the breakwater, and was constructed by the United States Army Engineers as part of the breakwater project.

In 1929, the illuminant used in the lighthouse was changed from oil vapor to electricity to improve the visibility of the light.

As fill was added to the lake surrounding Indiana Harbor East Breakwater Lighthouse, the entrance to the harbor moved northward. As a result, the east breakwater was extended roughly 2,300 feet to the north in 1934 and 1935. A steel tower set atop an arched concrete base was placed on a pier at the outermost point of the rubble-mound extension to mark the new entrance to the harbor. This modern structure is a twin to the tower placed on the Port Washington, Wisconsin breakwater the same year. Originally, a fourth-order Fresnel lens was used in the lighthouse, producing a white flash of one second duration every 7.5 seconds from a focal plan of 78 feet. Today, a modern green beacon sits atop the art deco tower sending out a signature of three seconds on followed by three seconds off.

The brick and concrete lighthouse was demolished in the 1980s, years after the harbor lights were automated, but its concrete pier remains in place, marked by a cylindrical D9 tower.

Foreign competition has taken its toll on the industry surrounding Indiana Harbor. Although the names of the mills have changed over the years, a significant amount of steel continues to be produced there. The heavy industry in the area has polluted the canal and harbor, but in 2001 plans for the dredging and cleanup of the waterway were being made, using as a model the successful project carried out on the contaminated Cuyahoga River in Cleveland.

For a larger map of Indiana Harbor East Breakwater Lighthouse, click the lighthouse in the above map.

Due to the private, industrial area surrounding the breakwater, Indiana Harbor East Breakwater Lighthouse is best seen from the water.